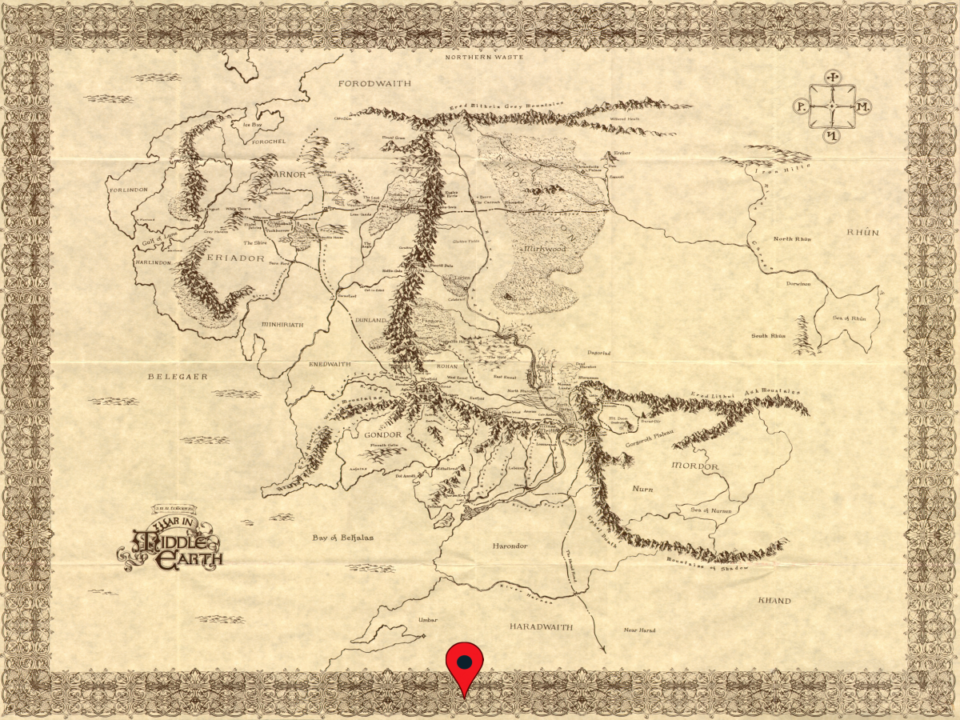 This month I discuss sub-equatorial Arda, where the stars are strange:

To his astonishment and terror, and lasting delight, Sam saw a vast shape crash out of the trees and come careering down the slope. Big as a house, much bigger than a house, it looked to him, a grey-clad moving hill. Fear and wonder, maybe, enlarged him in the hobbit’s eyes, but the Mûmak of Harad was indeed a beast of vast bulk, and the like of him does not walk now in Middle-earth; his kin that live still in latter days are but memories of his girth and majesty. On he came, straight towards the watchers, and then swerved aside in the nick of time, passing only a few yards away, rocking the ground beneath their feet: his great legs like trees, enormous sail-like ears spread out, long snout upraised like a huge serpent about to strike. his small red eyes raging. His upturned hornlike tusks were bound with bands of gold and dripped with blood. His trappings of scarlet and gold flapped about him in wild tatters. The ruins of what seemed a very war-tower lay upon his heaving back, smashed in his furious passage through the woods; and high upon his neck still desperately clung a tiny figure-the body of a mighty warrior, a giant among the Swertings.

On the great beast thundered, blundering in blind wrath through pool and thicket. Arrows skipped and snapped harmlessly about the triple hide of his flanks. Men of both sides fled before him, but many he overtook and crushed to the ground. Soon he was lost to view, still trumpeting and stamping far away. What became of him Sam never heard: whether he escaped to roam the wild for a time, until he perished far from his home or was trapped in some deep pit; or whether he raged on until he plunged in the Great River and was swallowed up.

Collectively called Haradwaith, Near and Far Harad were the home of the Haradrim, or Southrons (or, Swertings, to borrow the casually racist term Hobbits used for the dark-skinned folk).  They were a folk in almost constant alliance with Sauron due to his many emissaries and diplomats that poisoned the leaders of the Haradrim to his cause.  And, while much of Near Harad (and the northern regions of Far Harad that survive on half-remembered maps) was a great desert, little is known of the lands of Far Harad, “where the stars are strange.”

The men who lived there were quite fearsome, described, perhaps in an early historical example of racially-motivated sensory disconnect, as “like halftrolls with white eyes and red tongues.”  No matter the level of hyperbole, they were undoubtedly fearsome combatants, as Sauron held them (along with their Mûmakil mounts) in the highest regard among his allies.  The fearsome Mûmakil themselves, direct (and much larger) ancestors to the African Elephant of today’s Earth, give us our best clue as to what the lands of Far Harad might have looked like beyond the great deserts of Near Harad.  A modern African elephant needs 400 lbs of food and 50 gallons of water a day, which means that is is practically a necessity for them to live in or near lush vegetation and rain forests.  Thus, like the continent of Africa that it eventually became, the deserts of norther Far Harad eventually gave way to lush equatorial rainforests and jungles.

With trees great enough to hide the great monstrous Mûmakil, who knows what other terrors lurked in the jungles of Far Harad.  Great scaled monsters from the dawn of the first age, lost civilizations, and forgotten mountain ranges still standing tall from the making of the world.