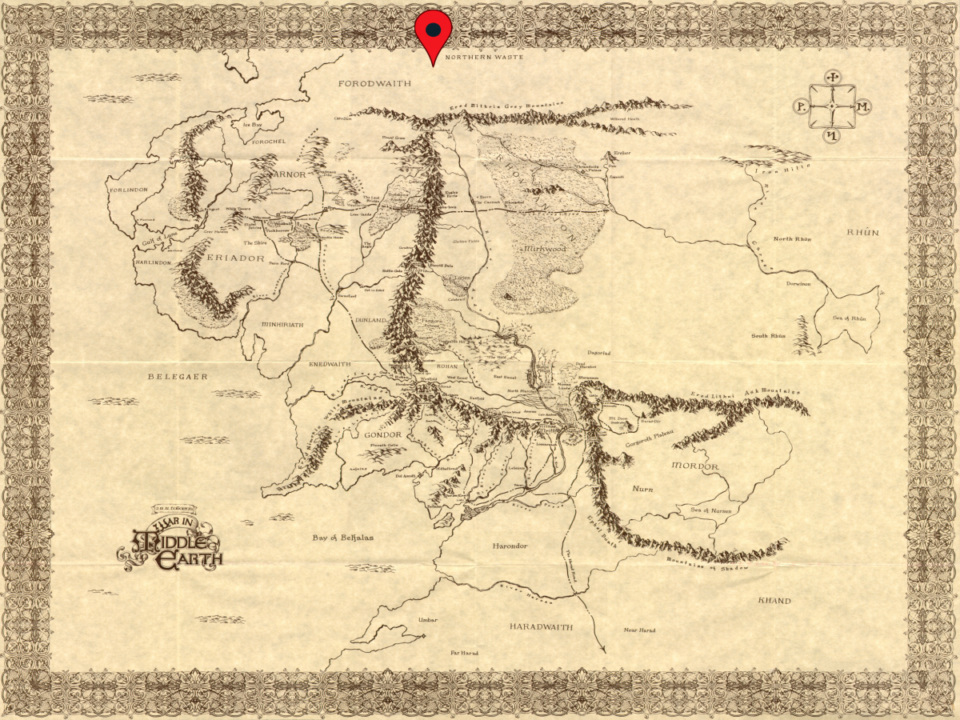 This month I’ll be discussing the frozen wastes in the far north of Middle-earth.

Most of these that escaped made their way into the North, and Thráin I, Náin’s son, came to Erebor, the Lonely Mountain, near the eastern eaves of Mirkwood, and there he began new works, and became King under the Mountain. In Erebor he found the great jewel, the Arkenstone, Heart of the Mountain. But Thorin I his son removed and went into the far North to the Grey Mountains, where most of Durin’s folk were now gathering; for those mountains were rich and little explored. But there were dragons in the wastes beyond; and after many years they became strong again and multiplied, and they made war on the Dwarves, and plundered their works. At last Dáin I, together with Frór his second son, was slain at the door of his hall by a great cold-drake.

Though I have discussed the Icebay of Forochel and the Withered Heath before, I have yet to take a closer look at the frozen wasteland that they bordered.  Most simply called it the Northern Wastes, though it was once known as Forodwaith before the breaking of Arda.  It was a flat and featureless land that stretched on for endless leagues into the north.  The great sea of Belegaer stretched up to border the realm to the west, a frigid sea, like the ancient Helcaraxë, was covered in “vast fogs and mists of deathly cold, and the sea-streams were filled with clashing hills of ice and the grinding of ice deep-sunken.”  Andbeyond even the ice bay of Forochel, the frozen earth and frozen sea merged into one great vast plain of ice where none but the greatest cold drakes could survive for long.

Though the name Forodwaith means “Northern Realm,” it also referred to the people who once inhabited the land.  The swarthy folk of Bëor crossed the Ered Luin into Thargelion in 410 F.A., and it is surmised that perhaps those who remained behind became the Forodwaith. Though these people had dwindled down, perhaps to nothing, by the end of the third age, a small remnant of “snow men” known as the Lossoth still inhabited the lands about the Ice Bay of Forochel (again, their story is told HERE).  It is also surmised that still other remnants of the Forodwaith still dwelt in the more “habitable” southern regions of the realm.  It was from these that the Lord of the Nazgul recruited the Men of Angmar.  Some of these peopls may have even lived as far south as the northern Anduin Vales and northern Rhudar (until they were driven away by the Eotheod and Gondorian’s respectively).

So deadly was the cold that almost nothing is known of the realm.  In fact, lying only a hundred leagues north of the pleasantly temperate Shire, the cause of Forodwaith’s extreme frigid cold might have been of unnatural origin.  Perhaps a remnant of the cold sorceries that built Melkor’s ancient fortress of Utumno so many thousands of years before still rested upon the northern lands of Arda.  No matter what the cause, in the deepest regions of the Northern Wastes, nothing could survive but the mighty Cold-drakes (Dragons without fire breath) whose ensorcelled constitutions had no use for food or warmth (these were the same beasts that slew Dáin I and his heir, Frór in the year 2589  of the third age. And, as the world slowly forgot the old ways and Melkor’s power of the Northern Wastes finally began to wane, the Cold-drakes retreated further and further to the north until they burrowed into the earth beneath tons of permafrost and ice.  And perhaps they slumber there still, waiting to be awoken by those who might delve too deep in the trackless ice of the wastes of Forodwaith.