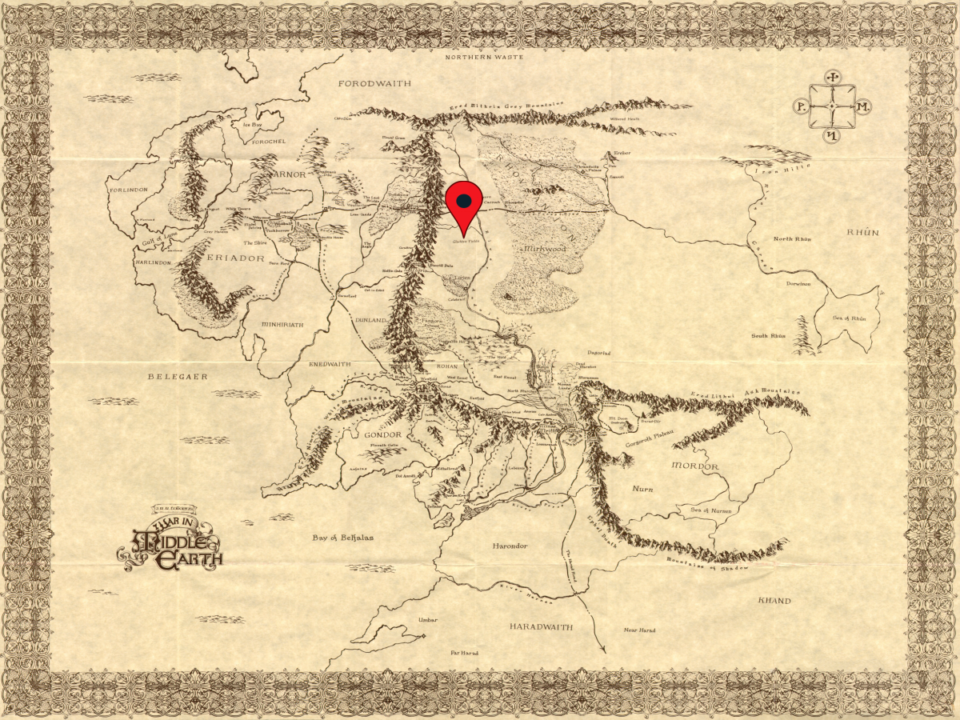 This month I’ll be talking about Isildur’s final resting place in the reed strewn marshes at the mouth of the river Gladden.

‘But the Ring was lost. It fell into the Great River, Anduin, and vanished. For Isildur was marching north along the east banks of the River, and near the Gladden Fields he was waylaid by the Orcs of the Mountains, and almost all his folk were slain. He leaped into the waters, but the Ring slipped from his finger as he swam, and then the Orcs saw him and killed him with arrows.’

Gandalf paused. ‘And there in the dark pools amid the Gladden Fields,’ he said, ‘the Ring passed out of knowledge and legend; and even so much of its history is known now only to a few, and the Council of the Wise could discover no more.

The Gladden Fields were located around the river Gladden at the base of the eastern slopes of the Misty Mountains.  To the elves they were known as “Loeg Ningloron” (pools of the golden water-flowers) and they derived their name from the great beds of flowering reeds and iris (Gladden) that covered the marsh land where the river Gladden connected to the mighty Anduin.

The most noteworthy aspect of the Gladden Fields is the fact that they were the location of the death of Isildur in year 2 of the Third Age.  After his party of Dúnedain were waylaid on their way back to the North Kingdom of Arnor by Orcs that outnumbered them tenfold, Isildur escaped swimming across the river Anduin, whose strong current had born him to the “great rushes and clinging weeds” of the Gladden Fields by the time he had reached the Western bank.

It was somewhere here, along the Western bank of the Anduin next to the Gladden Fields, that the one Ring, cut from Sauron’s hand and kept in pride, left Isildur’s hand.  No longer invisible, he was ended by the the poisoned arrows of the night-eyed Orcs.

In the “sources of the legend of Isildur’s death” addendum to the Disaster of the Gladden Fields story in Unfinished Tales, there is a discussion of the secret steel closet discovered by Gimli in Orthanc and how it contained both Isildur’s ring pouch and Elendilmir, the elvish Crystal which had sat upon 40 heads before Elessar took it up again.  Thus it can be assumed that Saruman had discovered Isildur’s remains during his search for the ring, though what dark fate they met at his hands remains a mystery.

Of course, the one ring had been gone for some 400 years by the time Saruman had found Isildur’s remains.  For some two and a half millennia the ring rested in the waters next to the Gladden fields until the Hobbit Déagol, one of a clan of Stoors who had crossed back into the the Wilderland “owing to dissensions and to the unfriendliness of the lands and clime of eastern Eriador”, discovered it.  As we all know, Déagol was soon murdered by his friend Sméagol (who would later be known as Gollum).  Sméagol then escaped up the Gladden River until he found his way to its source high in the Misty Mountains.  It is a common misconception that this was where Sméagol made his home.  However, the cavern in which Bilbo encountered him in The Hobbit was located some 150 miles north of the northern fork of the Gladden’s source, thus, Sméagol must have wandered a good while in the Misty Mountains before finding his home in the caverns below Goblin Town.

What became of Sméagol’s people, no one knows.  There were surely no hobbits in the area when Saruman began his search for the ring 2851 TA, thus the remaining Stoors must have left the area sometime after Déagol’s death in 2463 TA.  Perhaps they perished in the long winter of 2758-9 TA, all other clues as to their fate remain have been lost with the years.

The final point of interest about the Gladden Fields is that they lay at the bottom of a third pass through the Misty Mountains.  Everyone knows of the High Pass (exiting on the Dimril Stair) that Bilbo and the dwarves tried to take in The Hobbit, and the Redhorn Pass that the Fellowship tried to take in The Lord of the Rings.  Between the two was the Gladden Pass at the headwaters of the two forks that made up the Gladden River.  This was the pass taken by those searching for tidings of the Ringwraiths in the aftermath of the flood of the Bruinen.  Who knows, had the Fellowship made for the Gladden Pass, 100 miles north of the Redhorn Pass (a journey they could have made by the end of December, almost two weeks earlier than the date they attempted to cross the Redhorn) they might have avoided the flocks of crebain and beaten the ensorcelled storm-winds that barred their way across the Redhorn Pass!

That’s it for Middle Earth Monday this month.  Join me next month as I discuss the Western Islands, the last remnants of Beleriand!

First, this is sweet. (Seriously.)
Second, do you know when, exactly, Isildur declared primae noctis on the hobbits?

Yay! I can’t wait for the Western Isles entry. The Ruins of Himring… May I put in another request: Do Dol Amroth at some point.

No problem…I’m always happy to do requests as long as they are fairly obscure (No “Minas Tirith” or “The Shire”). And yeah, I was just going to do Himring, but while doing some research I discovered two other islands that remained from the drowning of Beleriand. If I can find much out about them, I’ll include them too!