Middle-earth Monday 9: The Haven of Umbar 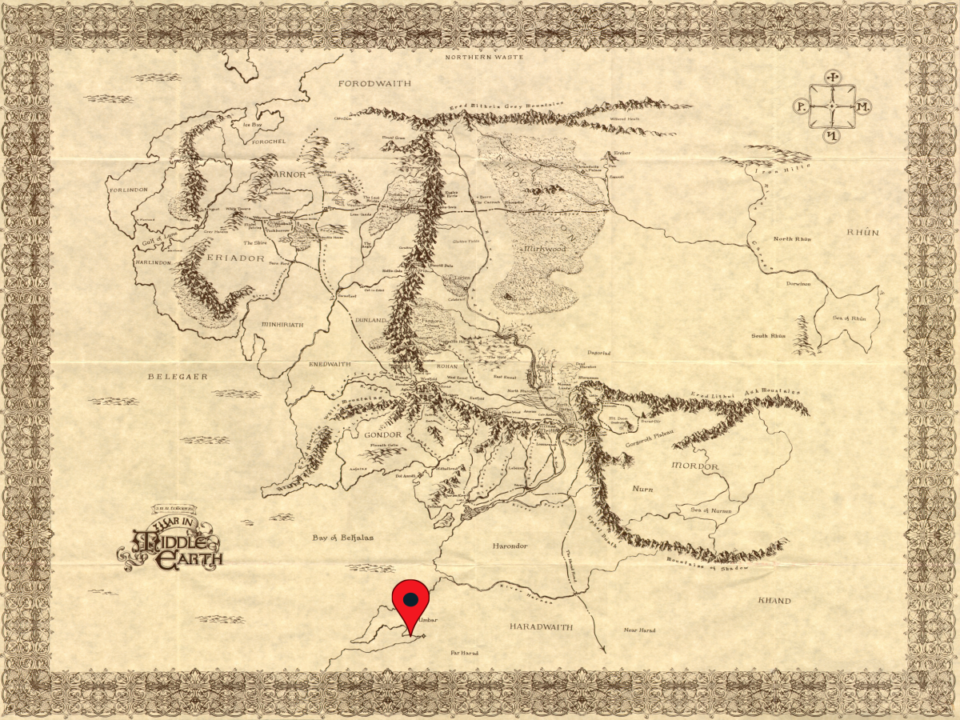 This month I’ll be discuss the haven of Umbar, the origin of many a Corsair raid against the realm of Gondor.

‘Aye, curse the Southrons!’ said Damrod. `Tis said that there were dealings of old between Gondor and the kingdoms of the Harad in the Far South; though there was never friendship. In those days our bounds were away south beyond the mouths of Anduin, and Umbar, the nearest of their realms, acknowledged our sway. But that is long since.’

Upon the far southern coast of the Bay of Belfalas lay the haven of Umbar, the greatest port in the harsh desert land of Haradwaith.  It was a natural embayment created by the rising sea level after a million square miles of Beleriand were submerged at the end of the First Age.  Though it was not the first haven founded by the Númenóreans (that, of course, was Vinyalondë in the year 875 of the Second Age), the initial settlements in the region could have dated as far back as S.A. 1200.  By the year 2880, the increasingly power hungry Númenórians fortified the Haven of Umbar creating the great fortress that came to be known as the City of the Corsairs in the Third Age.

It was in Umbar that the mad King Ar-Pharazôn accepted the obeisance of Sauron in 3261, thus unwittingly embracing the corruption that would lead to the downfall of Númenor 50 years later.  The Númenórians who stayed in Umbar during this period of corruption came to be known as Black Númenórians, 3 of whom became Nazgul (even the Mouth of Sauron was descended from their fell lineage).

Umbar remained under the thrall of the Black Númenórians until the year 933 of the Third Age when King Eärnil I took Umbar and made it a fortress of Gondor.  However, he was lost in a great storm at sea soon after and the land was contested for many years until his grandson Ciryaher (later known as Hyarmendacil, ‘South-victor’) finally crushed the region in 1050 forcing Umbar to submit to the supreme overlordship of Gondor.

Thus Umbar was restrained from further evil against the free peoples of Middle Earth until the death of King Valacar and the Kin-strife of 1432 T.A.  In the fighting over the throne Castamir the Usurper’s sons escaped to Umbar which they and their forces seized from the weakened Gondor’s control in 1448.  Thus did the kin of Castamir establish a base for their plots against the realm of Gondor.

However, the great grandsons of Castamir were finally defeated (and Umbar) retaken by Gondor in 1810 by King Telumehtar (or, as he came to be known, Umbardacil), grandson of King Minardil (who was slain by Corsairs when they ravaged Pelargir in 1634).  Unfortunately, Gondor’s hold on the haven was tenuous and lasted only briefly.

Thus, as Sauron began to arise again and Umbar once more fell under the thrall of his servants it became an evil city of malice and hatred.  The great tower that the followers of Elendil had raised upon the highest hill of the headland was finally cast down and destroyed.  For, atop this tower was placed a great globe of crystal that shone with the light of the sun and stars and it was hated by Sauron as a symbol of his humiliation before the fleets of Ar-Pharazôn.

However, as the Third Age drew to a close and The War of the Ring ended in victory for the free peoples of Middle Earth, the haven of Umbar was retaken for the final time by King Aragorn II.  Thus did the site of so much evil against the realm of Gondor finally end its hateful reign.

Wow, that Tolkien sure is good at cataloging.

You should have seen all the stuff I left out…

You failed to discuss the ill-conceived (and eventually disastrous) tourism slogan of TA 1400 for the “Dozen hundred years” celebrations of that year, “Umbar: You hardly know her”. Tourism revenue had been in steady decline since the early years of the thirteenth century TA when various plagues swept the city along with a water shortage and an unexplained swarm of biscuit weevils. Needless to say, the humorless people of Gondor further shunned the region and the city council fell further into corruption than city councils are naturally wont to do. Sauron, disguised, won the next mayoral election on an anti-weevil, separatist campaign and thus sealed the city’s fate.

And the lesson here is, just because a place uses a stupid slogan doesn’t mean it isn’t worth visiting.

Meant to give you props here for “Umbar? Barely knew ‘er!”. So there, props.