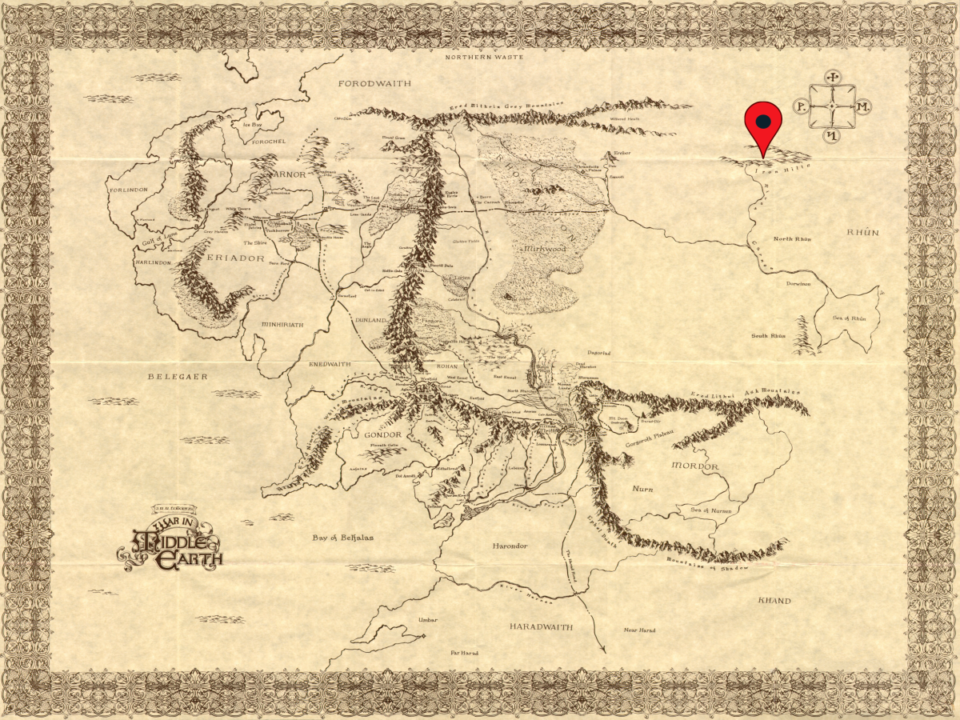 This month I discuss The Iron Hills, the last vestiges of Dwarven might in the Wilderland.

You may think that Rivendell was out of his reach, but I did not think so. The state of things in the North was very bad. The Kingdom under the Mountain and the strong Men of Dale were no more. To resist any force that Sauron might send to regain the northern passes in the mountains and the old lands of Angmar there were only the Dwarves of the Iron Hills, and behind them lay a desolation and a Dragon. The Dragon Sauron might use with terrible effect. Often I said to myself: ‘I must find some means of dealing with Smaug. But a direct stroke against Dol Guldur is needed still more. We must disturb Sauron’s plans. I must make the Council see that.’

The Iron Hills were a large range of low lying mountains some 50 miles to the southeast of the Grey Mountains.  The grey rock was twinged a ruddy color that was evidence of the plentiful iron deposits that the dwarves of Middle Earth had been mining from beneath their craggy heights for thousands of years.  However, aside from scattered mining camps (along with an influx of refugees from Khazad-dûm in the aftermath of the awakening of the Balrog in 1981), the Iron Hills had no settlements of note until the year 2590 of the Third Age when Grór, son of Dáin I fled the Dragons of the Grey Mountains to the Iron Hills.

In 2805, Grór died at the age of 241, and thus the lordship of the Iron Hills passed on to his son Dáin II, Ironfoot.  Through his leadership the dwarves of the Iron Hills became the most significant military force of the North (not that they were of insignificant might prior to his reign as was proved in 2799 at The Battle of Azanulbizar during the War of the Dwarves and Orcs).  Not only did they triumph in the Battle of Five Armies in 2941, but they also successfully defended Dale against a horde of Easterlings in The Battle of Dale during The War of the Ring.

No one knows what finally became of the dwarves of the Iron Hills in the centuries that followed the War of the Ring.  Some say the already rare dwarven women eventually dwindled below the level necessary to sustain the population.  Others say that the dwarves slowly returned to the stone from which they were birthed.  And still others wonder if the dwarves of the Iron Hills do not live on still, deep within the dark bowels of the earth.  Do they mine there still, or did they eventually delve too deep and, like their kin, the folk of Durin, awaken that which should not have been awoken?