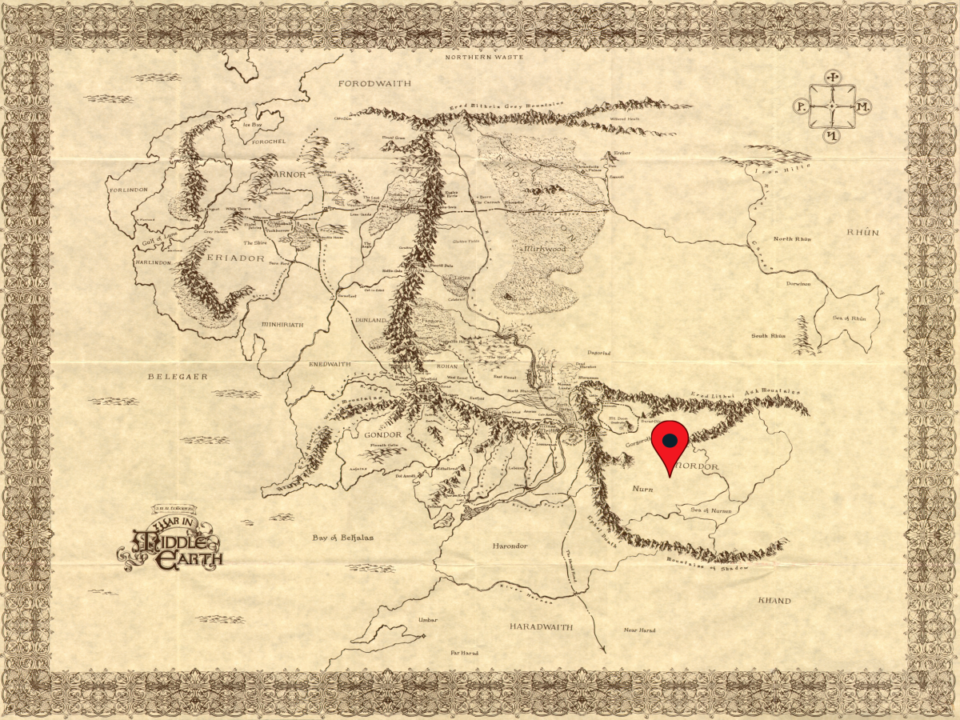 This month I discuss the much debated location of Middle-earth’s ashiest place:

Before the next day dawned their journey to Mordor was over. The marshes and the desert were behind them. Before them, darkling against a pallid sky, the great mountains reared their threatening heads.

Upon the west of Mordor marched the gloomy range of Ephel Dúath, the Mountains of Shadow, and upon the north the broken peaks and barren ridges of Ered Lithui, grey as ash. But as these ranges approached one another, being indeed but parts of one great wall about the mournful plains of Lithlad and of Gorgoroth, and the bitter inland sea of Núrnen amidmost, they swung out long arms northward; and between these arms there was a deep defile. This was Cirith Gorgor, the Haunted Pass, the entrance to the land of the Enemy.

Most of Mordor was a blasted desert land, a place of ash and rock where few green things found purchase to grow.  This was especially true of the Plateau of Gorgoroth, a harsh highland in thrall to the black magics of Barad Dur and the endless outpouring of ash and stench from Mount doom.

While there is no question that Mordor was a land covered in ash and volcanic rock, the exact location of the great ash plain of Lithlad has long been debated by fictional scholars.  Some, based on earlier maps from the History of Middle-earth point to a location along the southern slopes of the easternmost arm of the Ered Lithui.  Of course, while ash from a volcano the size of Orodruin could easily travel hundreds of leagues via wind alone, the pulverized rock, minerals, and glass that make up a volcanic ash cloud would probably not be as concentrated after their journey over the two downward jutting arms of the Ered Lithui.

I could see the case being made for Lithlad being the area between the two downward jutting arms as the first offshoot of the Ered Lithui does not stretch far to the south.  However, those highlands that were not part of the Plateau of Gorgoroth proper would have been more treacherous foothills than “plains” of any kind.

Thus, the location of Lithlad was most likely the one shown on the map above.  As the Plateau of Gorogoroth fell away to the lowlands about the Sea of Nurnen, the ash that was not trapped in the various arms of the Mountains of Ash and Shadow would have naturally funneled into the flat lands about the Sea of Nurnen.  This makes a lot of sense as these lands were full of Sauron’s endless fields of crops on which his endless armies fed.  Volcanic ash is naturally rich in minerals and nutrients that would create unusually fertile farmlands.

Thus, the “ash plain” of Lithlad was no waist deep desert of thick volcanic effluvia piled up at the base of the Ered Lithui.  Rather, it was a fertile farmland that was subject to a sustained gentle dusting of fine volcanic ash after all the dense volcanic rock and accretionary lapilli had been deposited around the Plateau of Gorgoroth.  Without this farmland and the food it provided to Sauron’s armies, the free peoples of Middle-earth might have had a much easier time holding off the Shadow armies during the War of the Ring!