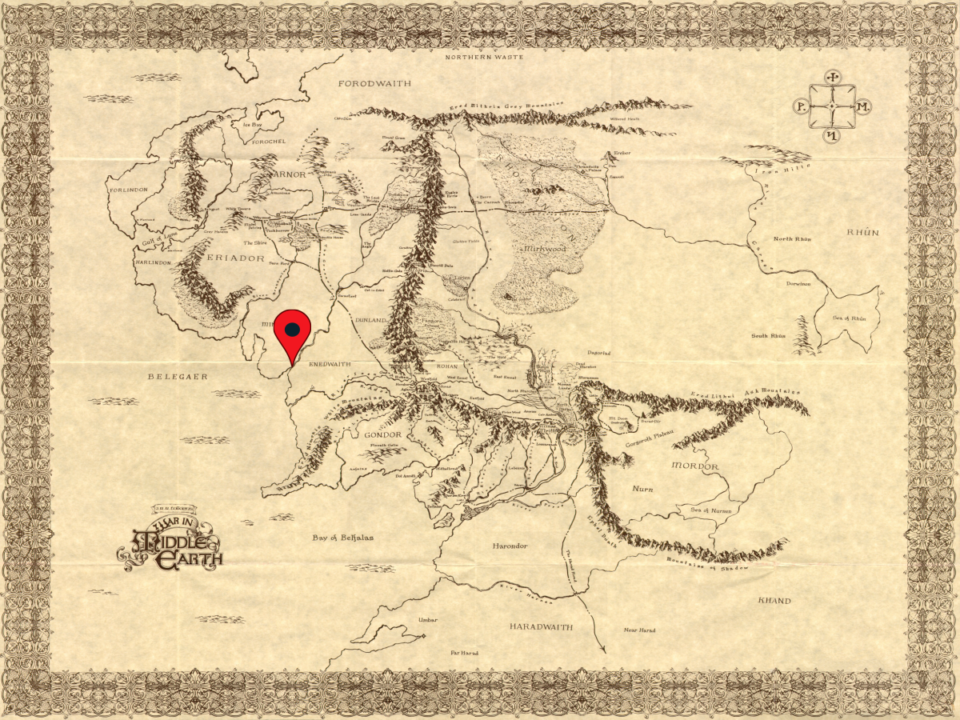 This month I’ll be discussing the ancient Numenorean port of Lond Daer.

Lond Daer (Sindarin for “great haven”) was another city that was little more than a crumbling ruin by the time of the Third Age of Middle Earth.  It was founded at the mouth of the Greyflood (aka Gwathlo) River (which was the boundary between the regions of Minhiriath and Ededwaith) around the year 750 of the Second Age by Aldarion the mariner.  It was originally named Vinyalondë (Quenya for “new haven”) and was the primary source of lumber for Numenor due to the great forest that extended on both sides of the Greyflood and reached far into the mainland.

As you can tell from the map of Middle Earth, at the end of the Third Age, the lands around the Greyflood were almost completely deforested.  This was due to the lumber trade during the Second Age that destroyed the forests to build the ships and cities of Numenor.  Thus, as the second millennium of the Second Age neared, the once great forest through which the Greyflood flowed had been reduced to the small woods about the mouth of the Brandywine which were known as the Eryn Vorn.

The forest folk who dwelt in Minhiriath tried to stop the Numenoreans several times during the Second Age through acts of sabotage and all out attacks upon the port of Lond Daer (so great was their wrath at the destruction of their home that they even sided with Sauron during the War of Elves and Sauron).  But the Numenorean greed for shipbuilding timber would not be stopped.  Though the port finally fell into disuse after Sauron was defeated by Admiral Ciryatur  in the Battle of the Gwathlo in 1701, the damage had been done.  The once great forest was gone, its people chose to retreat into the small dark woods of the Eryn Vorn to live a solitary life.

And yet, as the millennia passed and Lond Daer crumbled into ruin, the people of the Eryn Vorn lived on.  Even in the time of the Third Age, the forest folk of the Eryn Vorn lived in a secretive forest society.  And by that time, the woods they had known only from barely remembered stories were finally returning to the plains of Minhiriath.

It’s troubling. Deforestation has a huge impact on indigenous peoples, yet without it we can never defeat the ultimate evil. Choices…

“….and its people were chose to retreat into the small dark woods”
Remove ‘were’?

It’s really not a problem at all. The articles are still very interesting reads.
I’ve read a lot of Tolkien’s books, past the main ones, and I’ve never read about some of these places. Or at least not in so much detail.

P.s. If you don’t find me pointing out these mistakes helpful, just let me know and I’ll cease and desist 👌

No really, this is very helpful, good excuse to go back and fix a few mistakes…just glad they are getting read. I tried to pick out places I didn’t know much about and then did a full search of a massive Tolkien PDF collection (History of Middle-earth, everything) to see what mentions I could find. A lot of this is my best guess, but I tried to keep it as true to what he actually wrote as possible!

I see.
The History of Middle-earth (yeah, I didn’t spot that typo either 😉 ) series is not something I’ve read myself.
Maybe I’ll have to correct that oversight now if it’s got this level of additional detail contained within.

Honestly, it’s mostly just various early versions of the Lord of the Rings, etc, not a lot of extra detail not found in the books…most of these posts are based on a paragraph or two from the entire set…I haven’t read through the whole thing either to tell the truth 🙂

Glancing through, this was apparently back when I was still writing Middle Earth, instead of the correct “Middle-earth” 😉