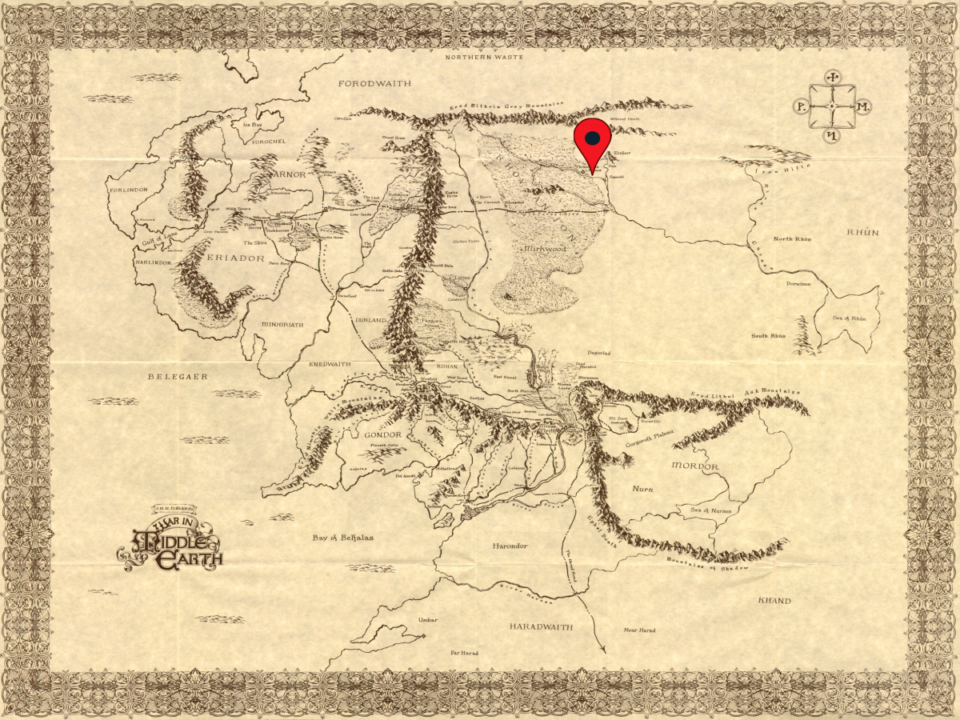 This month I’ll be discussing, the “long” swath of marsh lands on both sides of the Forest River as it exited Mirkwood.

The day grew lighter and warmer as they floated along. After a while the river rounded a steep shoulder of land that came down upon their left. Under its rocky feet like an inland cliff the deepest stream had flowed lapping and bubbling. Suddenly the cliff fell away. The shores sank. The trees ended. Then Bilbo saw a sight: The lands opened wide about him, filled with the waters of the river which broke up and wandered in a hundred winding courses, or halted in marshes and pools dotted with isles on every side: but still a strong water flowed on steadily through the midst. And far away, its dark head in a torn cloud, there loomed the Mountain! Its nearest neighbours to the North-East and the tumbled land that joined it to them could not be seen. All alone it rose and looked across the marshes to the forest. The Lonely Mountain! Bilbo had come far and through many adventures to see it, and now he did not like the look of it in the least.

Though Mirkwood was a daunting obstacle for any traveler attempting to reach Erebor, Dale, Esgaroth or the Iron Hills from the West, in the latter years of the Third Age, the Marshes around the upper arm of the Celduin proved to be an even greater obstacle to many travelers. Marshland had always existed along the Forest River between Mirkwood and the Long Lake, for the spring floods left the land on either side of its banks a perpetually sodden mass of low pools and swampy land. However, unfortunately for Thorin Oakenshield’s intrepid company of dwarves (and unbeknownst to Gandalf at the time in which he departed to deal with the Necromancer in the south), by 2941 the Long Marshes had greatly increased in size, swallowing up the end of the elf path through Mirkwood in their swampy grasp.  Only in the rocky land closer to the Long Lake did the marshes finally begin to dry out.

The reason for the increase in size was two-fold.  First, in the early 2900s, a series of large earthquakes so cracked and fissured the land about the forest river as it exited Mirkwood that the river was thrown into a maze of smaller tributaries, pools, and waterlogged land for miles on either side.  Many blamed Smaug for the earthquakes, though scholars pointed out what nonsense it was that a dragon could cause an earthquake, let along a sleeping dragon that had not stirred for years.  Secondly, rains had seemed unusually strong throughout the land in those times, which apparently caused widespread flooding beyond the seasonal norms.

Many attempted to claim that the Marshes extended for a hundred miles to the south and were the very same marshes that blocked the Old Forest Road where it met the Celduin at the edge of Mirkwood.  But the long marshes and the lower marshes were both caused by flooding of the forest river and the main tributary of the Celduin that flowed south out of the Mountains of Mirkwood rather than the Celduin itself.  Thus, it is unlikely that the great River Running would have turned to marshlands for its entire length between the Long Lake and Mirkwood to the south.

In the aftermath of the War of the Ring the unnatural rains in the Mountains of Mirkwood (perhaps the work of the Necromancer, keen on dividing his enemies) returned to their normal levels, and the river once again found a steady course through land that had been thrown into upheaval by the earlier decade’s earthquakes.  Even so, it was many years before the land dried out and the old elf path once again found its way free of the waterlogged lands of the Long Marshes.

Just chiming in to reiterate that this is my favorite recurring feature on isleyunruh.com. What a wacky URL! How ever did you come up with it?