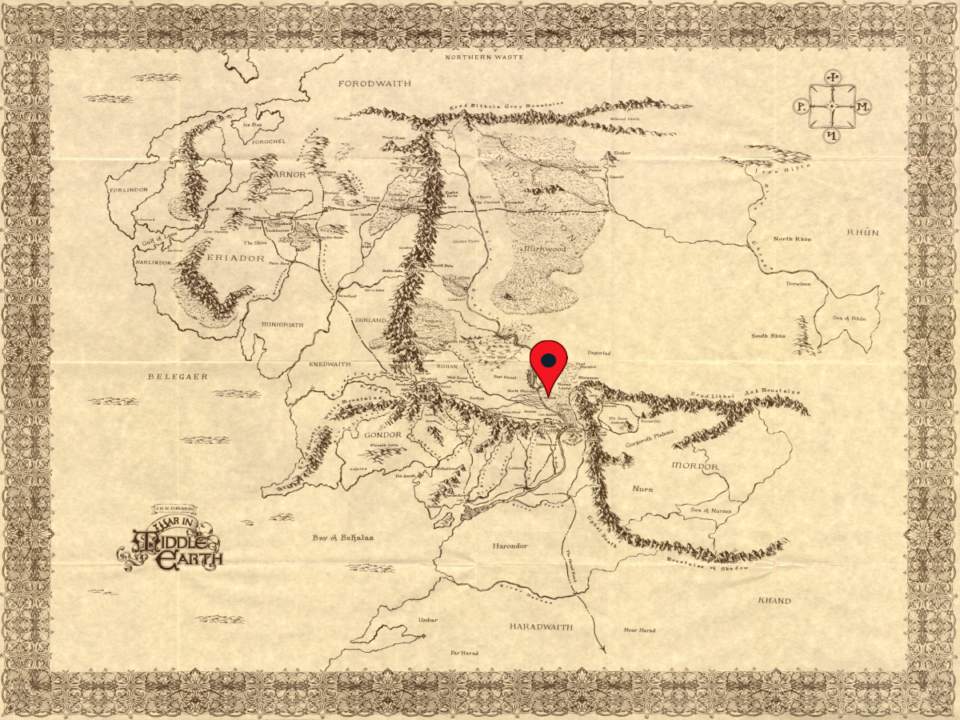 This month I’ll take a look at the largest swamp in Middle-earth–a land known for a fair number of significant swamps.

After they had eaten and drunk, sitting upon the grass, Celeborn spoke to them again of their journey, and lifting his hand he pointed south to the woods beyond the Tongue.

`As you go down the water,’ he said, `you will find that the trees will fail, and you will come to a barren country. There the River flows in stony vale amid high moors, until at last after many leagues it comes to the tall island of the Tindrock, that we call Tol Brandir. There it casts its arms about the steep shores of the isle, and falls then with a great noise and smoke over the cataracts of Rauros down into the Nindalf, the Wetwang as it is called in your tongue. That is a wide region of sluggish fen where the stream becomes tortuous and much divided. There the Entwash flows in by many mouths from the Forest of Fangorn in the west. About that stream, on this side of the Great River, lies Rohan. On the further side are the bleak hills of the Emyn Muil. The wind blows from the East there, for they look out over the Dead Marshes and the Noman-lands to Cirith Gorgor and the black gates of Mordor.

Of the countless swamps and fens that spread out from the banks of the mighty Anduin as it swept south through Middle-earth, the Nindalf (also known as the Wetwang) was by far the largest.  Covering some 2500 square miles to the immediate south of the Emyn Muil and the Falls of Raurus, only the most foolhardy of travelers attempted to venture too far into its labyrinthine waterways.  Though it did not have quite as fell a reputation as the blighted Dead Marshes to the northeast, the Nindalf had claimed its fair share of travelers and merchants who had dared to attempt to cross it.

A combination of sloping lowlands and the force of the Entwash’s extensive inland delta managed to overwhelm the banks of the Anduin for some 75 miles south of the Falls of Rauros.  This influx of water was the source of the massive swamp, and, along with the Emyn Muil, formed an excellent natural barrier to any armies from the east who had designs on southern Rohan and northern Gondor.

Of course, this natural barrier did nothing to stop the Wainriders from crossing the undeeps to the north of the Emyn Muil in T.A. 1899, but who knows how many more invaders might have swarmed into Rohan and Northern Gondor were it not for the Nindalf and its uncharted marshlands.

Lol, well, if it makes you feel better, as I was writing this I totally thought about how hilarious the name “Wetwang” was.