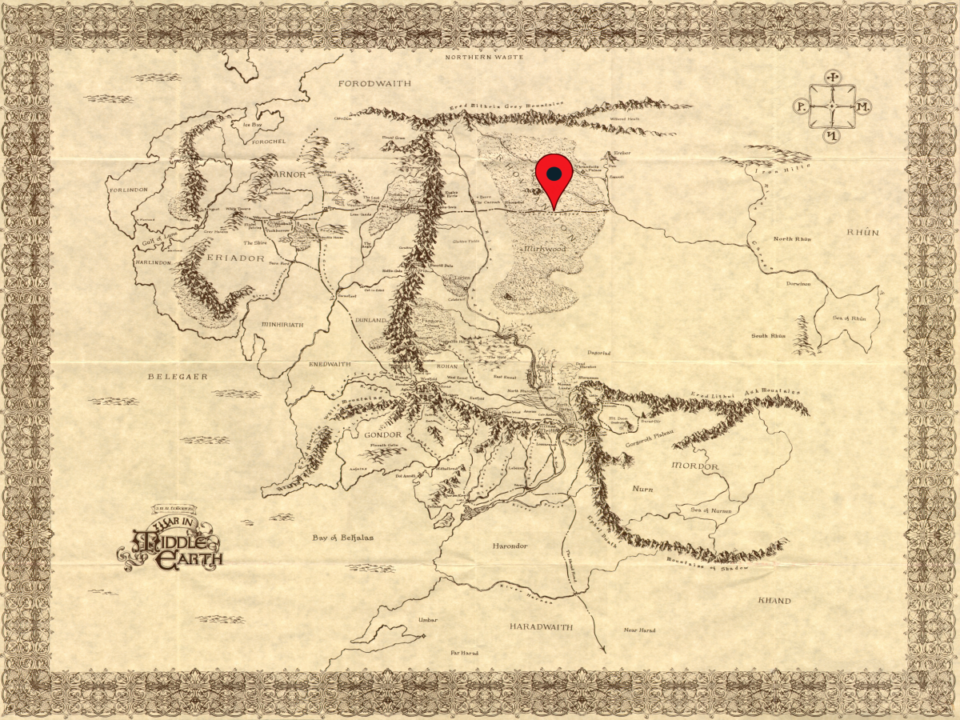 Welcome back to everyone’s favorite www.isleyunruh.com Monday feature! Middle Earth being the place of enchantment and wonder that it is, each month I will use my love of fictional cartography to transport you to another time and place. So why not take a moment to fill your head full of knowledge that will have no bearing at all on the real world? This month I’ll be discussing the old dwarven road that once provided passage through Greenwood the Great.

As soon as they left his high hedges at the east of his fenced lands they turned north and then bore to the north-west. By his advice they were no longer making for the main forest-road to the south of his land. Had they followed the pass, their path would have led them down the stream from the mountains that joined the great river miles south of the Carrock. At that point there was a deep ford which they might have passed, if they had still had their ponies, and beyond that a track led to the skirts of the wood and to the entrance of the old forest road. But Beorn had warned them that that way was now often used by the goblins, while the forest-road itself, he bad heard, was overgrown and disused at the eastern end and led to impassable marshes where the paths had long been lost. Its eastern opening had also always been far to the south of the Lonely Mountain, and would have left them still with a long and difficult northward march when they got to the other side.

Long ago, before Sauron’s fell magics had corrupted  Mirkwood in the year 1050 of the third age, the ancient forest was known by the name Greenwood the Great.  In days of peace, before the dwarves awoke the ancient evil that lurked in the dark hollows beneath Khazad-dûm, there was much commerce through the wild lands of the North.  The Ered Mithrum could be crossed by use of The High Pass, but Greenwood the Great was a far greater barrier.  However, using their dwarven stonecraft and engineering, a great road was built straight through the heart of Greenwood the Great.  Over the swift flowing Anduin a mighty bridge was built, and thus the dwarves were able to cross from the Blue Mountains to the Iron hills without becoming lost in Greenwood the Great’s ancient labyrinths of timber.

They called the road Men-i-Naugrim (the dwarf road), and it was such a feat of engineering that it still held the unchecked growth of Mirkwood at bay at the end of the Third Age despite over 3000 years of neglect.  The bridge over the Anduin was not so long lived however.  Even by the end of the Second Age the bridge had crumbled into a deep ford, the same ford Elendil and Gil-Galad crossed as they led the armies of the last alliance of elves and men through the Anduin vales. It was also over this ford that the Fallohides, last of the Hobbits to dwell in Greenwood, crossed in fear of Sauron’s evil.

By the time Bilbo set out on his fateful journey to the Lonely Mountain in 2941 of the Third Age, the Old Forest Road beyond the ford had finally been overtaken by the forest at its far eastern end where it abutted the swampy banks of the Celduin.  It was a road much frequented by the servants of Sauron, but feared by all others.  The histories of Middle Earth do not mention the rebuilding of the Men-i-Naugrim during the peace of the Fourth Age, but such was the craftsmenship of the original road builders that I would imagine such a task would have been quickly accomplished.