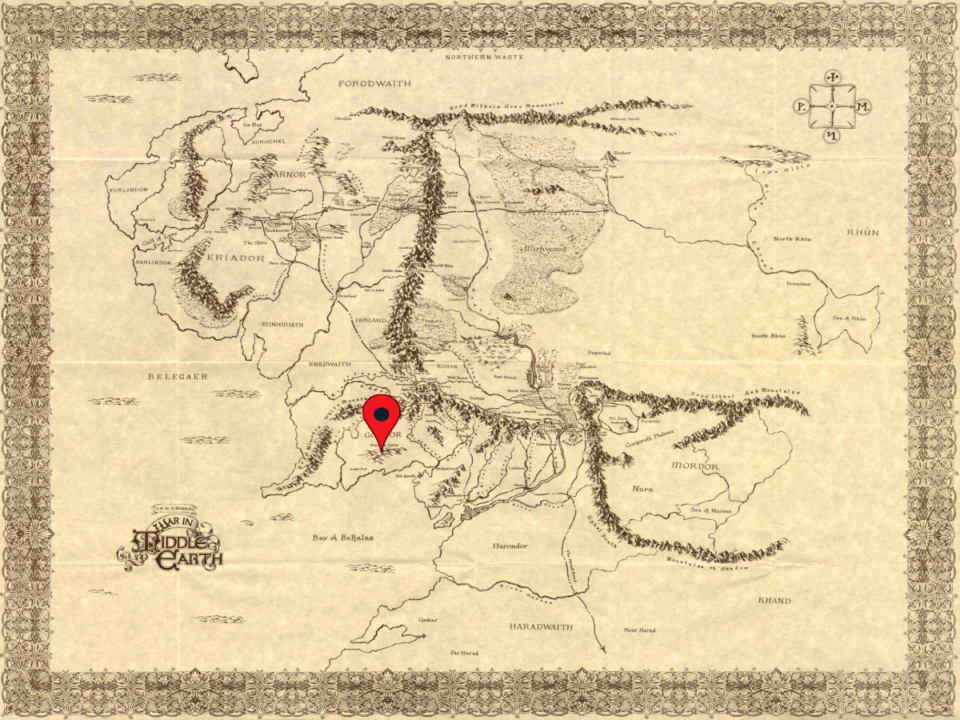 This month I’ll be discussing the green hills of the Pinnath Gelin in south-western Gondor.

But when the dawn came, cold and pale, Aragorn rose at once, and he led the Company forth upon the journey of greatest haste and weariness that any among them had known, save he alone, and only his will held them to go on. No other mortal Men could have endured it, none but the Dúnedain of the North, and with them Gimli the Dwarf and Legolas of the Elves.

They passed Tarlang’s Neck and came into Lamedon; and the Shadow Host pressed behind and fear went on before them, until they came to Calembel upon Ciril, and the sun went down like blood behind Pinnath Gelin away in the West behind them. The township and the fords of Ciril they found deserted, for many men had gone away to war, and all that were left fled to the hills at the rumour of the coming of the King of the Dead. But the next day there came no dawn, and the Grey Company passed on into the darkness of the Storm of Mordor and were lost to mortal sight; but the Dead followed them.

Southern Gondor, the land below the White Mountains, was a wide land populated by numerous settlements and fiefs.  The westernmost of these lands was Pinnath Gelin (Sindarin for “green ridges”), the land between the rivers Morthrond and Lefnui.  It lay along the shorelands of Anfalas (or, Langstrand the “long shore”) where its rolling green hills quickly swept their way upwards until they joined with an outreaching arm of the Ered Nimrais far to the north.

It was a lush land of green hills dotted with forests between their hilltops.  Terraced crops lined their sides, while the folk of their land were known for their gallantry almost as much as they were for their manner of dressing in green from head to toe.  Perhaps a curious look in less verdant lands, but in the green hills of Pinnath Gelin, their dress was as invisible as a hobbit in an elven cloak.

Despite being situated on the edge of the Gondorian empire, the men of Pinnath Gelin did not forget their oaths of fealty towards Gondor during the war of the ring.  Hirluin the Fair himself led a company of three hundred men to Minas Tirith during their hour of need.  And though Hirluin was felled in the Battle of the Pellenor Fields, the bravery of his gallant, green-clad men was not soon forgotten.