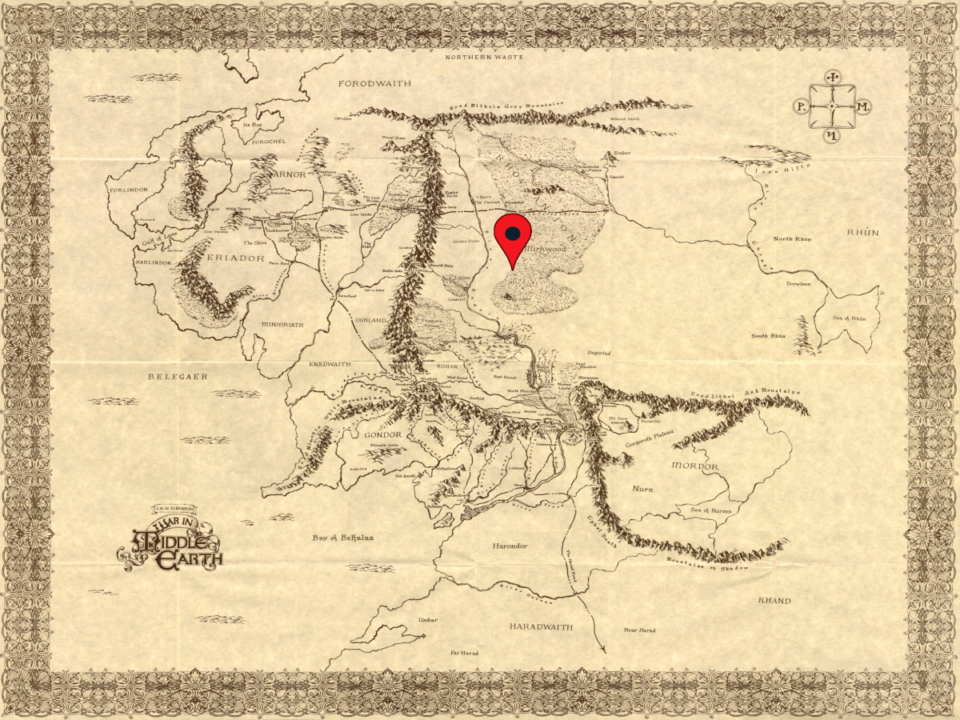 [Editor’s note: The section on Elrond’s post Bruinen-flooding scouting parties (now italicized below) has been shown to be incorrect in the comment section.  You can find the correction HERE.  Thus, though this initial post finishes strongly in favor of the northern location of Rhosgobel, I have now come around to embrace the southern Narrows of Mirkwood as the most probable location for Rhosgobel.  The Unfinished Tales quote is still problematic, but this new location does at least explain Radagast’s choice to abandon Rhosgobel (the fact that it was too perilously close to Dol Guldur).]

This month I attempt to clear up all the misinformation out there about the exact location of Rhosgobel.

The hobbits had been nearly two months in the House of Elrond, and November had gone by with the last shreds of autumn, and December was passing, when the scouts began to return. Some had gone north beyond the springs of the Hoarwell into the Ettenmoors; and others had gone west, and with the help of Aragorn and the Rangers had searched the lands far down the Greyflood, as far as Tharbad, where the old North Road crossed the river by a ruined town. Many had gone east and south; and some of these had crossed the Mountains and entered Mirkwood, while others had climbed the pass at the source of the Gladden River, and had come down into Wilderland and over the Gladden Fields and so at length had reached the old home of Radagast at Rhosgobel. Radagast was not there; and they had returned over the high pass that was called the Dimrill Stair.

Fictional cartographers have battled over the “Rhosgobel” problem for as long as fictional naturalists have battled over the question of whether or not Balrogs have wings.  And sadly, to this day, there is no consensus on the exact location of the famous home of the Istari Radagast the Brown.  Before I jump into that issue (which, like my controversial claims as to the salinity of The Sea of Nurnen, is sure to cause a flame war in the comment section of this post) I would like to first examine a few of the aspects of Rhosgobel on which fictional cartographers are in agreement.

First, Rhosgobel was longitudinally located just within the Western borders of Mirkwood.  It was not, as some have erroneously believed, on the edge of the forest, but actually within the tree line some ten miles or so as a spider crawls.  Rhosgobel can roughly be translated as “Brown Hay.”  The “brown” is obviously for the “Brown Wizard,” though the “hay” is actually from an older word meaning “hedge.”  This, along with the Noldorin “Rhosc” (brown) and “gobel” (fenced homestead), suggests that Radagast’s home was fortified in some manner (most likely through a natural hedge, modified by his mastery of plant and animal to keep out unwelcome guests).

It is unknown what Radagast’s actual living quarters looked like within the natural garth of Rhosgobel, but I would assume some combination of earthen dwelling and (perhaps) a large hollowed out tree.  Radagast, like the Blue Wizards Alatar and Pallando, eventually abandoned his quest to protect Middle-earth–though in his case it was more a matter of “going native” than the mysterious disappearance of Alatar and Pallando to the east.  Thus, a more traditional mannish dwelling seems unfitting for an Istari so ill at ease with the trappings of civilization.

While the above facts are the subject of little dispute, the exact latitudinal location of Rhosgobel is another matter entirely.  Many fictional scholars insist that, based on the quote that opened this post, Rhosgobel must have been directly opposite the Gladden Fields.   And while at first read, the line:

…and had come down into Wilderland and over the Gladden Fields and so at length had reached the old home of Radagast at Rhosgobel.

seems to suggest a close proximity between Rhosgobel and the Gladden Fields, there is little discussion of the implications of the followup line:

Radagast was not there; and they had returned over the high pass that was called the Dimrill Stair.

[As discussed above, this is incorrect, the party of scouts that journeyed to Rhosgobel didn’t come anywhere near the High Pass]

There are two other bits of information (beyond the erroneous Gladden Fields argument) that lead fictional cartographers to place Rhosgobel in a more southern location.  First, an early map from The History of Middle Earth volume VII placed Rhosgobel in the far southern border of Mirkwood, perilously close to the fell hill of Amon Lanc.  However, given the degree to which Tolkien’s early maps changed before he published The Lord of the Rings, I believe this evidence to be of lesser import.

Far more convincing (for the southern argument) is Gandalf’s quote to Beorn in The Hobbit:

“I am a wizard,” continued Gandalf. “I have heard of you, if you have not heard of me; but perhaps you have heard of my good cousin Radagast who lives near the Southern borders of Mirkwood?”

Here, it is quite explicitly stated that Rhosgobel must have at least been in the narrows of Mirkwood or lower (giving some credence to the “parallel to the Gladden Fields” argument) to be considered within the “Southern borders of Mirkwood.”

However, in a very late note in The Unfinished Tales, Tolkien explicitly states:

Rhosgobel, called “the old home of Radagast” in The Fellowship of the Ring…is said to have been “in the forest between the Carrock and the Old Forest Road.”

Though The Unfinished Tales is not exactly canon, this note was nonetheless written after The Hobbit, and thus I am choosing to take this quote quite seriously as a final clue as to the location of Rhosgobel.  This was the location that Tolkien imagined for Rhosgobel at the end of his life, and of all the evidence for the Southern location, only the quote from The Hobbit seems to have merit in my eyes.  And I believe that quote is more an example of the Hobbit’s less fully fleshed out Middle Earth than it is a clue to the location for Rhosgobel.

Indeed, in The Fellowship of the Ring, Gandalf is seen describing Rhosgobel thusly:

I turned then east and north and journeyed along the Greenway; and not far from Bree I came upon a traveller sitting on a bank beside the road with his grazing horse beside him. It was Radagast the Brown, who at one time dwelt at Rhosgobel, near the borders of Mirkwood.  He is one of my order,but I had not seen him for many a year.

Here, you can see that Gandalf no longer claims Rhosgobel to be in southern Mirkwood, which might perhaps be taken as a sign of Tolkien’s changed attitude towards the location of Radagast’s home.  You can also see that apparently between the time of The Hobbit and The Lord of the Rings Radagast abandoned Rhosgobel.  Perhaps the growing evil in Mirkwood drove him from his home.  Or perhaps, the “borders” of Mirkwood were no longer secluded enough for the increasingly reclusive Radagast.  Thus, in an attempt to distance himself even further from the world of man, Radagast may have retreated to some unknown location deep within the endless groves of the mighty forest of Mirkwood.

The irony of titles like “fictional cartographer” and “fictional scholar” had me in stitches. In spite of itself, Middle Earth Monday often manages to be hilarious.

Damnit, there was absolutely nothing funny about this post.

But the quote doesn’t say the scouts came back via the High Pass (with capitals); it says they took “the high pass that was called the Dimrill Stair”, i.e., the Redhorn Pass, even further south than the Gladden Fields. So I think this does argue for a more southern location for Rhosgobel.

Being that it was a slow day at work, I wrote two whole blog posts in response to this. Short version? Shit, you are right.