Middle-earth Monday 6: The Sea of Rhûn 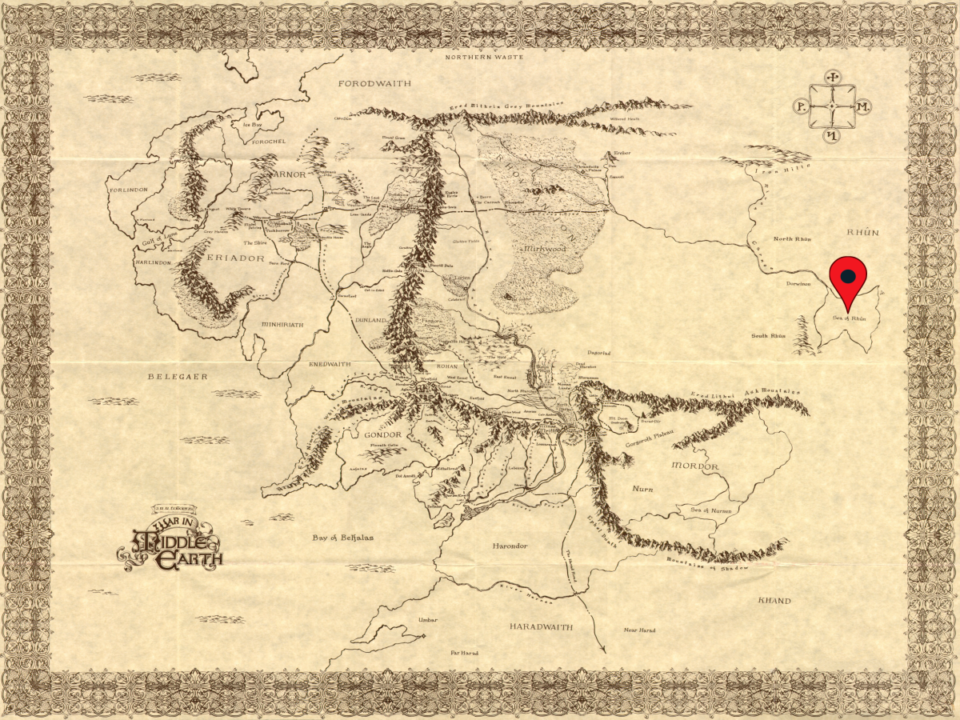 This month I’ll be discuss the great inland Sea of Rhûn.

Aragorn smiled at him; then he turned to Boromir again. `For my part I forgive your doubt,’ he said. ‘Little do I resemble the figures of Elendil and Isildur as they stand carven in their majesty in the halls of Denethor. I am but the heir of Isildur, not Isildur himself. I have had a hard life and a long; and the leagues that lie between here and Gondor are a small part in the count of my journeys. I have crossed many mountains and many rivers, and trodden many plains, even into the far countries of Rhûn and Harad where the stars are strange.

The great inland Sea of Rhûn was Middle Earth’s largest body of water (measuring some 25,000 square miles) in the Third Age and was the Western boundary of the region known as “Rhûn” (Sindarin for “East”) in the far East of Middle Earth.  The Sea of Rhûn was a remnant (along with the bitter Sea of Nurnen) of the once great Helcar Sea (itself formed at the dawn of the world by Melkor’s destruction of the northern lamp, Illuin).  It was fed by several freshwater rivers  the most famous of which was the Celduin (the River Running) that flowed from Erebor.  With no natural outlet to the sea, its salinity (due to the evaporation of its waters) was assumed to be slightly higher than other freshwater lakes, though the water was most likely still potable.  Many maps show a large forested isle in its Southeastern waters, so we must assume its existence though little is known of it.

The Southwestern shores were ringed by low lying mountains, though they ended in plains a hundred miles before the Ash Mountains of Mordor.  Throughout the Third Age, many an Easterling has swept across that corridor in violence against Gondor.

The Southeastern shores were flat (the beginning of the endless plains of Rhûn).  Upon these plains grazed the wild Kine (oxen) of Araw.  It was one of these that Vorondil, father of Mardil slew to make Boromir’s great horn long ago.

The Northeastern shore was home to a great pine forest.  It has long been conjectured that this forest was in fact a remnant of the Wildwood which sheltered the bay of Cuiviénen upon which the elves awoke when the world was young. Though, so many millennia had passed that its connection to that ancient forest would have been tenuous at best.

The Northwestern shores about the mouth of the Celduin were the site of the wine fertile lands of Dorwinion.  Much strong wine was made in this region and then boated North along the Celduin.  Such was the quality of the wine that it was a favorite of King Thranduil himself.

At the height of Gondor’s power (during the reign of King Hyarmendacil I) the Sea of Rhûn marked the Easternmost boundary of the realm.  And though Minalcar ( Rómendacil II) managed to drive all the Easterlings away from the Sea of Rhûn’s shores in the 13th century T.A., by 1940 T.A. (with the invasion of the Wainriders) the Easterling menace had begun to chip away at the boundaries of Gondor once more.

Order was not to return to the Sea of Rhûn until the Fourth Age when King Elessar and King Éomer went to war against the Easterling menace one final time. In the peace that was wrought from that final conflict the shores of the Sea of Rhûn we at last freed from the violence of the Third Age. Perhaps in the aftermath the island in its Southeastern waters was finally explored and properly mapped!

This is why we don’t play Mouse Guard anymore.

Excellent! This is the best Middle Earth Monday yet. Also, thank you for posting it in a timely manner, thus clearing up my evening for other activities than constantly and obsessively reloading your blog.

May I put in a request for Dol Amroth?

As the only person who requests things, they are bound to be covered eventually! I’m about to try to write 6 months worth of MEM posts (in preparation for potential grad school busyness) I’ll make sure to get a Dol Amroth in there.

“I’ll make sure to get a Dol Amroth in there.”
TWSS?

That is funny on a number of levels.

It was a fair question!