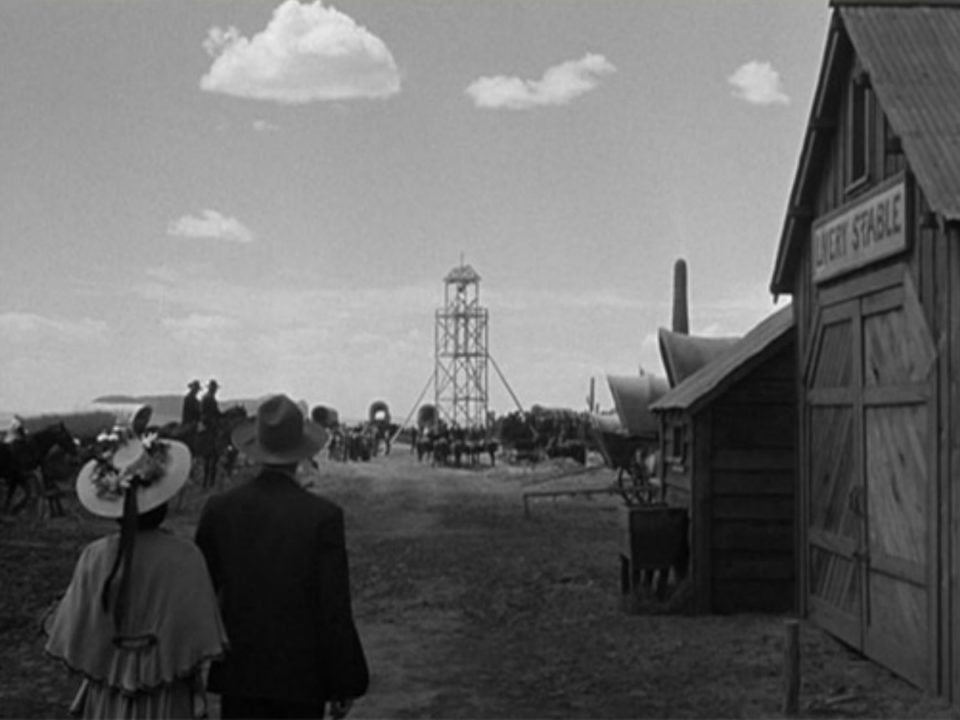 John Ford is, along with Howard Hawks, one of the quintessential Hollywood western directors. When one thinks of classical American westerns, John Ford films like Stagecoach and The Searchers immediately spring to mind.  It is perhaps an overused term, but John Ford’s films really did have a certain “poetry” to them, a sense of hushed reverence in their portraits of a West that never was.  Today, I will discuss My Darling Clementine, quite possibly John Ford’s best film–a bold claim to say the least.

I never hesitate to call My Darling Clementine a “classical western” even though on the surface it shares some of the qualities that would come to characterize the revisionist Westerns of years to come–namely, the focus on the encroaching East and the civilization it brings with it.  And yet Ford weaves this Western Ragnarök into his story in such a way that it reinforces the qualities of the mythical West rather than negates them.

At first, it seems as if My Darling Clementine means to embrace the civilization that meant the end of the West.  The film opens with Wyatt turning from cattle driver to lawman.  In a sense he is already symbolically giving up the frontier for the law and order of the East.  Wyatt asserts his power in the town by removing a drunk Indian from a bar.  Already, the Indians have lost their status as noble antagonists to the westerner and fallen victim to the vices of the white man. Then Wyatt meets Doc Holiday and the film’s central power struggle begins.

Much has been written on My Darling Clementine‘s characterization of Doc Holiday as the book learned Easterner to Wyatt’s experienced Westerner. However, the distinction goes far beyond a shift in political ideology in John Ford’s postwar work. This dynamic is also key to understanding why this film is a “classical” western while High Noon from a few years later is already in the revisionist camp.

Wyatt, who has come to bring law and order to the town is cast as the representative of the West, while Doc, who lives a lawless existence is cast as the representative of the East.  And in this film it is paradoxically the job of Wyatt (the West) to tame Doc (the East).  This inversion of the roles you would expect each character to take enabled Ford to bring a strong civilization vs frontier dynamic to his film without sacrificing the elements that make westerns such an integral part of our cultural identity as Americans.

Thus, such scenes as the classic church dance become a kind of “aged warrior’s last ride” rather than the final nail in the coffin of the West.  The church and all it brings with it has come to the West.  But it isn’t built yet, and thus, Wyatt and the townsfolk are able to dance joyfully upon its half built skeleton (an activity that will most likely be absent from the solemn halls of the completed structure.

The influence of the East is everywhere, from Doc’s effete preference for Champagne and Shakespeare to Wyatt’s discovery of a taste for perfumed barber soaps (in a delightful recurring gag that displays a much lighter touch than the typical Fordian overstated broad comedy).  But this is still a “western” world.  Drunken Shakespeare recitations, half built churches and the arrival of the civilized Clementine will not avenge the murder of Wyatt’s brother.  Because this is still the classical West, only might can avenge that wrong.

Thus, Wyatt and Doc must fight the Clantons in that central myth of American culture: the gunfight at the OK Corral. The East with its churches and champagne are forgotten as good men shoot bad men for the simple reason that the bad men needed shooting. It’s not the world we live in, or even the world the actual Wyatt Earp lived in. It’s the world that John Ford created as he almost single handedly shaped our cultural heritage with his films.  He took the story of a couple of bully lawmen letting a feud escalate violently out of control and turned it into a grand allegory for all that is most important about the American West.

And finally, when the bad guys are killed and the day is won, Wyatt leaves town–if only to avoid Clementine and her siren’s call of civilization.  The east might be spreading its tentacles, but, for Wyatt, the West is still out there, just over the horizon. They might be building churches in his world, but they are still only half built.