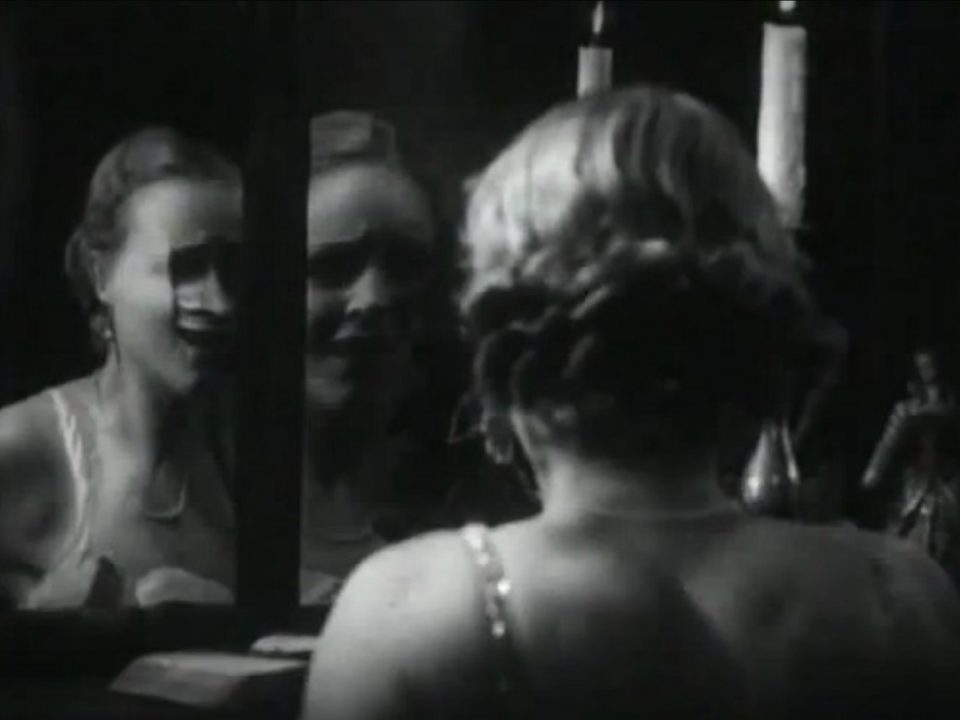 Of the string of early 1930s Universal Studios horror films for which director James Whale is best known, my easy favorite is The Old Dark House. Not to take anything away from the brilliant Invisible Man and Frankenstein films, but for sheer expressionistic atmosphere and darkly comic horror, The Old Dark House is hard to beat.  It is the quintessential cinematic version of that archetypal story of travelers marooned in an “old dark house” at the edge of nowhere–a story that has been imitated many times since the release of this film, but has never been equaled.

The titular “old dark house” of this film exists in a land that only borders our real physical world.  Constructed of shadows and madness, the old dark house only truly manifests during the darkest, stormiest nights.  It lies at the end of every lost pathway, waiting for those travelers who have strayed off the map during the night.  Just look at how the storm-swept earth shifts and moves to bring the travelers to the old dark house at the beginning of the film.  Otherworldly, elemental forces must be at work to cause the lost travelers to stumble out of the confines of reality.

And yet, importantly, nothing is explicitly supernatural at the old dark house, for even in the midst of the elemental fury within which it has manifested itself, it is still tied to the physical world.  True, the mumblings of the grotesque monster of a “butler” sound like the whisperings of demons. True, madness seems to follow the insane old religious woman like a creeping plague, distorting everything around her as she rebukes the whorish ways of the flesh-exposed young female travelers.  True a shimmering mist of illusion and magic surrounds the ancient withered husk of a “patriarch” of the family (brilliantly played by a woman).  And, true, the madness that lies locked away in the upper level seems to possess a malevolence beyond human comprehension.  However, all of these mysteries of the old dark house (and many more) COULD have a logical explanation.  Unfortunately, in the midst of the maelstrom, logical explanations seem just out of reach of the traveler’s grasp.

And so the travelers must stumble on through the night, braving the horrors, desperately holding out till morning when the evils of the house sink back into the earth along with the darkness and storm waters.  Just think how much difference the daylight of that final scene makes on the atmosphere of the film.  Suddenly maps make sense again and hospitals exist and the horrors of the old dark house have been once again banished to the far rooms of the top floor.

Is the film as terrifying as this description has made it sound? Not exactly, Whale’s typical darkly cynical comedic touches are far too prevalent for anything to truly frighten the viewer, especially a viewer hardened on a diet of modern horror films.  However, rather merely trying to frighten, the humor elevates the film to a first rate piece of cinematic entertainment.  The Old Dark House is absolutely enthralling from beginning to end, thanks in no small part to the brilliant cast.

Melvyn Douglas was in top form as a mouthpiece for Whales wry sarcasm, and Charles Laughton has a great turn as a sad sack doofus who has his super hot girlfriend taken right out from under his nose.  However, while Karloff was an impressive physical presence, the real star of the show has to be the madman from the top floor played by the unknown actor Brember Wills.  There are few greater cinematic pleasures than to watch him creep downstairs and slowly turn into a force of wildly abandoned evil against which few in the house can stand for long. To witness that one single instant, when his face transforms from that of a helpless old man to that of a force of pure malevolence is to understand the full potential of cinema as an art form.