An open letter to www.isleyunruh.com RE: The “Make it Rain” parody video. 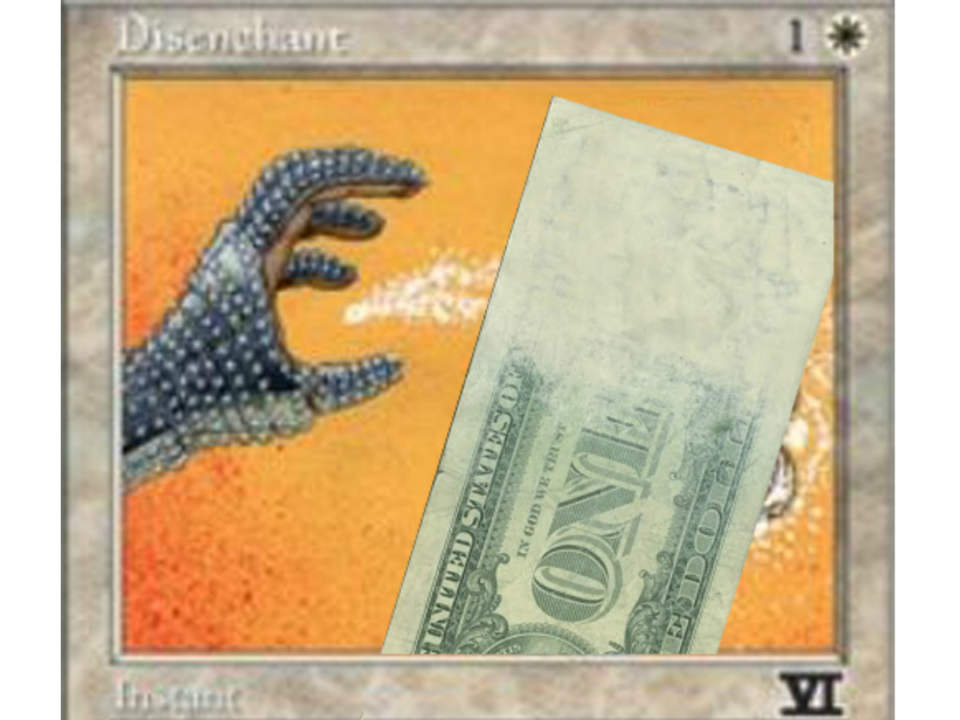 I’m sure you are asking yourself what could have provoked my great girth into quivering jiggles of pure internet raeg; after all, you undoubtedly assumed you were “preaching to the cultists” given my well publicized love of Fastbond.  But no, not this time, in this case your obvious disrespect for all aspects of the planeswalking lifestyle (in addition to basic misunderstanding of the rules) has forced me to once again take keyboard to hot dog fingers and unleash a mighty broadside of righteous internet venom.  Watch out you people in the front row, this is going to get messy.

First let’s talk rules–and I will attempt to use small words since I suspect your understanding of basic English (and game rules) is limited to pop-up books (and basic 2D chess).  I see you making a pretty big deal about Fastbond, and your video does indeed feature an impressive display of making it rain lands.  In response, I have only one thing to say: “Fastbond, meet Disenchant.”  What’s that you say? Lands don’t use the stack?  Well unfortunately the damage triggers from Fastbond do, thus, your “mighty” “rainstorm” would be limited to 2 lands before your Fastbond exploded like it had just eaten a wafer thin mint.

Of course, let’s say you somehow manage to avoid getting disenchanted and counterspelled back to the Hyperborean Age and somehow found yourself sitting with unrestricted access to a Fastbond enabled opportunity to, as you so crudely put it, “make it rain” (a situation you would NOT find yourself in were you so unlucky as to meet me on the battlefield of Magic.  Anyway, what is the best you could do?  6 lands and a Goblin Grenade (which, in this era of increased terrorism and suicide bombings is a card I have been campaigning Wizards of the Coast for the banning of…but that is an open letter for another day) on yourself to be followed by permanent topdeck mode.  Congratulations, I’ve seen better plans from Ray Stantz.

Even if you were so bold as to rip off my very own Crucible of Worlds, Troubled Healer, Fastbond deck (don’t listen to the imitators, that deck was my idea and it always has been), if my weekly forays into the local strip club Gingers and Juice have taught me anything, one does not make it rain one land card (or bill) at a time.

Finally, even with a proper card drawing engine, you are only going to end up “Fastbonding” yourself to death.  Trust me, I know from experience.  One of my favorite decks back in the day was my 55 forest, 1 mountain, 1 Black Lotus, 1 Fireball, 1 Horn of Greed, 1 Fastbond “Fastbondgeddon” deck.  It had the ability to take the opponent down to 1 life on the VERY FIRST TURN.  And yet, astonishingly, I would merely end up Fastbonding myself to death just as often!

However, your obvious misunderstanding of the fundamental rules of Magic aside, your disrespect of the basic rules of magic etiquette is even more shocking.  I don’t  know where to begin, so I suppose I will start with personal presentation.  So many were your grievances in this area that I will just list the most pressing ones here:

Finally, let’s discuss your treatment of the cards.  Much as I understand your need to toss your magic cards “up, and let them hit you in the head” in an Unca Scrooge like orgy of wild abandon (I will confess that I have often considered burrowing through a bathtub of magic cards like a gopher), I literally cringed to think of the edge damage and scuffing that must have resulted when your lands hit the floor.  Would Aragorn have used the shards of Narsil to pick his toes with?  Would Dr. Strange use the all seeing Eye of Agamotto to see through Black Widow’s spandex (I must admit in this instance I would, but that is why I am not Sorcerer Supreme)?  Such is the respect you must show to your magic cards, and thus, any urges to “make it rain” however natural and understandable, must be avoided.

I realize that your inflated ego has blinded you to the colossal stupidity of your video.  And while I understand the heavy crown of hubris all too well, in your case it is all too obvious that your bloated self worth is based on the smoke and mirrors of your not inconsiderable street cred rather than your ability on the Magic Battlefield.  I can guarantee one thing should we ever encounter each other face to face.  You would find it easier to get in a water-fight on Arrakis than you would find it to attempt to so flippantly “make it rain” at my kitchen table.

What kind of person would take the time to craft such a scathing letter about something so inconsequential? The mind! It boggles!

Obviously someone with WAY too much time on their hands…

Honestly, I can’t argue with him on that one. His decks still suck though.

Did you write that yourself to be funny or is someone really that humorless? The mind boggles…

Heh, my second favorite internet activity, after trolling, is trolling myself.

It’s enough to boggle the mind!

Shit, Isley, I’m so sorry you had to read such a scathing piece of hate mail. Your willingness to post it for us all to see is an honorable, though unnecessary, bit of self-flagellation. But what are you going to do now? Are you just giving up Magic forever, or are you actually going to go ahead and shut down your whole website, like you probably ought?

I’m really not sure what to do. At the very least my burgeoning rap career has been put on hold till I can figure this shit out.

That dude has almost certainly never been laid.

Yes. perhaps he should start writing more open letters to any girl who would possibly sleep with a guy who considers himself famous for writing open letters ([whispered:] about magic the gathering).

How right you are, Leah.

If you guys check the links to the website “his” other open letters were originally posted to, you might get a hint as to his identity.

Also, Brian, for your information, I have gotten laid at least a handful of times (depending on one’s definition). 2 or 3 for sure anyway.

If by a “handful of times,” you mean that you are getting laid by your hand, then yes.

Look, I said it depended on the definition.

Will this reply box get infinitely small?

Find the limit of Isley’s patience as the reply box approaches infinity.

And apparently that was the end of the infinite nest of reply boxes.