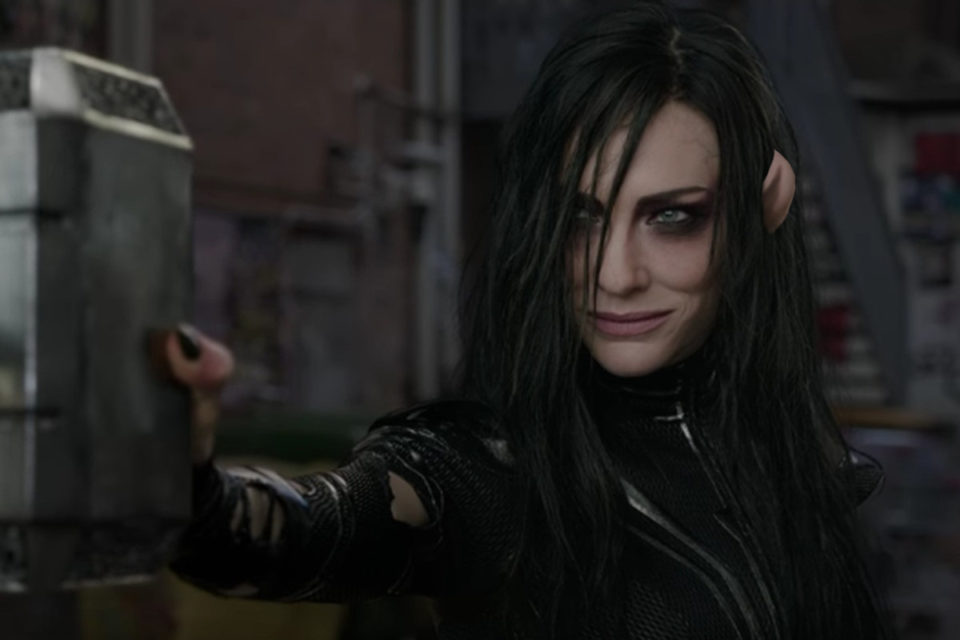 Greetings Marvel Studios. Eugene Pendergrass here, you may know me from my notorious open letters, the number of which is legion.  There are few fetid corners of “so-called” nerd culture which my open letter tendrils have yet to penetrate, but somehow you had yet to attract their probing ire.  Well consider yourself unviolated no more, I would have a word.

This morning, suspecting nothing out of the ordinary, I sat down to watch your recently released trailer for the upcoming Thor: Ragnarok with my trusty “boner pillow” in my lap.  I should make it clear that though I watch anything with the potential for arousal in seclusion, I nevertheless still find it comforting to cover up any potential excitement that might emanate from my lower regions as the intensity of my titillation can be cause for embarrassment, even when alone.  It turned out my boner pillow was an unnecessary precaution, as any potential stirrings in my manhood at the opening images of a chained and glistening Thor wilted like a rose in the grip of a fully flame-on-ed Johnny Storm when CATE GALADRIEL BLANCHET appeared onscreen.  Are you kidding me?!!?1!  Did no one in at any point in the long chain of oversight within your massive corporation raise their hand to say “hey guys, wait, we can’t use Blanchet, she’s already Galadriel!”  I find it inconceivable that there was not a single person involved with this movie at any point that had not seen The Lord of the Rings and did not realize the error of their casting.  While I have as many issues with the Lord of the Rings trilogy as Captain America has with unpunched Nazis, Cate Blanchet’s delicious cheekbones have nevertheless firmly carved their way into the hearts, minds, and bollocks of every red-blooded Lord of the Rings fan from the moment she went Dark Willow on Frodo.  And then, to turn around and use a person who can only be seen from henceforth on as Lady Galadriel to represent Hela, Goddess of Death, is, to put it lightly, the greatest tragedy this world has ever seen.

Like the Human Torch enjoying a sunset, I saw only red for the next few moments, letting the fear, emptiness, and despair wash over me like the cold waters of the Atlantic over the senseless body of Captain America.  Just as I had regained enough composure to begin to attempt to process what was happening, who should appear onscreen but Karl Urban, or, AS YOU MAY KNOW HIM, Motherfucking Éomer, Third Marshal of the Riddermark.  I’m not ashamed to admit it.  At that moment, my boner pillow became my scream pillow–though, thankfully I did not (again) make the mistake of attempting to use my love pillow for a scream pillow.  Urban is as inseparable from Éomer as Stallone’s brilliant delivery of the famous phrase “I am the Law” is from Judge Dredd himself.

Some might say that at least we aren’t talking about main characters and that The Lord of the Rings is not even part of the Marvel Universe (debatable say I!)  To them, I say that every character is important no matter how small.  Who would Hal Jordan be without Abin Sur flying in to give him the ring like some kind of Ungaran Jango Fett?  And it’s not like you haven’t attempted to maintain cross-franchise integrity with minor characters in the past–you even went so far as to make sure Ryan Reynolds played Deadpool in both the masterpiece Wolverine: Origins movie AND the execrable Deadpool solo franchise after all, a decision that was fantastic for all fans of intra-film continuity, regardless of the quality of the films!  So, to suggest that one of the most important elves in Middle-earth does not warrant enough enough respect to even pay attention to the actress playing her causes me to fly into a Hulk-esque rage the brutality of which only the immortal Mark Ruffalo has been suited to capture.

HOWEVER.  This is still only the first trailer.  Plot details are scarce, so perhaps I will reserve hull-ramming your Basestar with the full weight of my Battlestar Galactica sized wrath until I am able to verify that this film is NOT my long dreamed of introduction of Middle-earth into the MCU.  After the disappointment of The Lego Batman Movie‘s dong-fisted attempt to facehugger implant Sauron into Batman’s rogues gallery, an attempt that made that Big Bang Theory minstrel show on TV seem like Dr. Whovian high art in contrast, I think Tolkien fans are owed a proper Middle-earth mashup.

Though I have boycotted viewing many of your previous movies for a myriad of reasons (my grievances ranging from men’s rights violations to accusations of excessive feminism), at the very least you have always maintained an extraordinary fidelity to the important cause of intra-filmic representational homogeneity.  As such, I hope that you continue in this tradition and it is revealed that either Cate Blanchet is actually phase one of your upcoming Marvel Cinematic Universe/Middle-earth crossover OR that her inclusion into this trailer was merely a very poor taste April Fool’s joke.  My all seeing Eye of Agamotto is watching you with the intensity of Sherlock Holmes’ magnifying glass…choose your next casting move very carefully, I will brook no further dalliance with such flagrant cross-franchise contamination.

No no, not me, this was EUGENE.