An Open Letter to Twitter RE: The Defamatory Claim of Gandalf’s Illiteracy 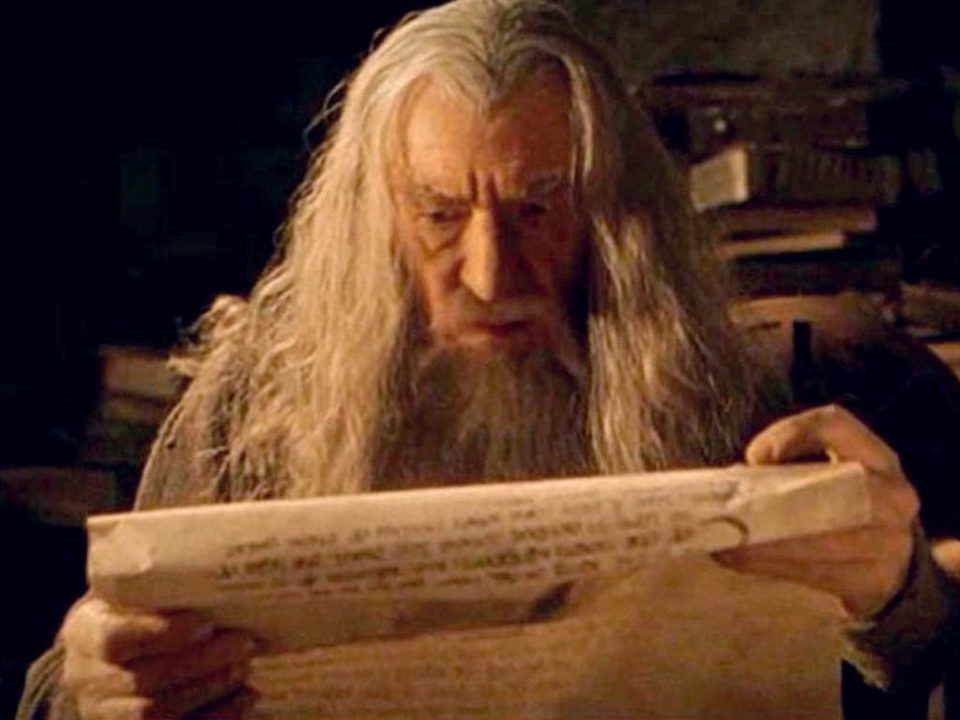 Thaur govannen Twitterverse, it is I, Eugene Pendergrass, here with the unfortunate news that I must direct one of my inimitably inimical broadsides in your direction. Beware the splashback, this one could get messy, because, like a dad joke upon the Doors of Durin, you shall not pass until I have had my full say. It has been brought to my attention that legions of tweeters have been impugning Gandalf’s ability to read.  I am specifically referring to this recent post by Kurt “you are now on my list” Schiller:

I was 20 pages into an intricate, fully cited rebuttal to Kurt’s libelous character assassination on my third-favorite wizard in Arda before realizing that there were deeper issues at play here.  Still, before addressing those issues, I can not let such baseless claims go unanswered, so, quickly, let me tear into this “Gandalf the Illiterate” nonsense like a wayward Jedi in a room full of younglings.

Bottom line, had this “Kurt Schiller” even read the original text, he would have quickly seen his pet “theory” had more holes than an eleventy-first birthday cake.

However, Kurt’s “alternate Middle-earth facts” are not the real black pill here.  Nay, it is his intent to mock and ridicule the illiterate that is the real howdah that broke the Mûmakil’s back for me.  He might “claim” that there was no shame meant, but, let’s be honest here, OBVIOUSLY this post was meant to mock and ridicule.  Just look at the pages and pages of responses, all heaping derision on the maligned maia.  Almost no comments point to the many flaws in Kurt’s argument, and, more importantly, no comments point out that illiteracy is NOT a shameful condition.  Illiteracy is a common occurrence and says nothing as a person’s intelligence, or their devotion to the legendarium.

Doth I protest too much? Mayhaps.  If I may be frank, like Kurt’s Bizzaro Gandalf, I too suffer from the affliction of illiteracy.  More than anything, today’s post is meant to set the record straight as to my own inadequacies with the written word.  Despite years of study, I admit today, for the first time, that I am unable to fully read Elvish.  Some might blame the almighty professor for creating an incomplete language, but I say best to not blame the valar for the failings of the fírimar–this one is all my own fault.

I remember all too well the derision my incomplete grasp of basic Middle Quenyan aroused within the Vinyar Tengwar forums.  To this day my screen name Gwaihir_69 is the object of scorn and ridicule due to the infamous “diacritic-gate” of 2011 when I insisted for a month (with an increasing series of personal attacks and petty insults) that the correct noun from the stem “yer” was yérê, not yérë.  Helge Fauskanger’s “Team Diaeresis” might have beaten “Team Circumflex” (and the remains of my dignity) when the dust settled, but the accusations of illiteracy that were thrown my way that day were wounds that cannot be wholly cured.

Thus, Kurt Schiller and the derisive comments of Twitter users everywhere have prompted me to both grow as a person and to finally accept my tattered reputation as an elvish linguist of dubious ability.  We might all do better to embrace our failings–each of us can let our own personal “diacritic-gate” debacles push us to accept hard truths about ourselves that might otherwise be a pill too bitter to swallow.  So, let me give you some advice fellow illiterates.  Never forget what you are.  The rest of the cryptolinguistic community will not.  Wear it like armor and it can never be used to hurt you.

And, if I must grow as a person while accepting hard truths, I suppooooose Gandalf could have taken another look at those fancy swords they just found once they got out of the troll cave.