Painting in Miniature 4: Finishing up Skaven 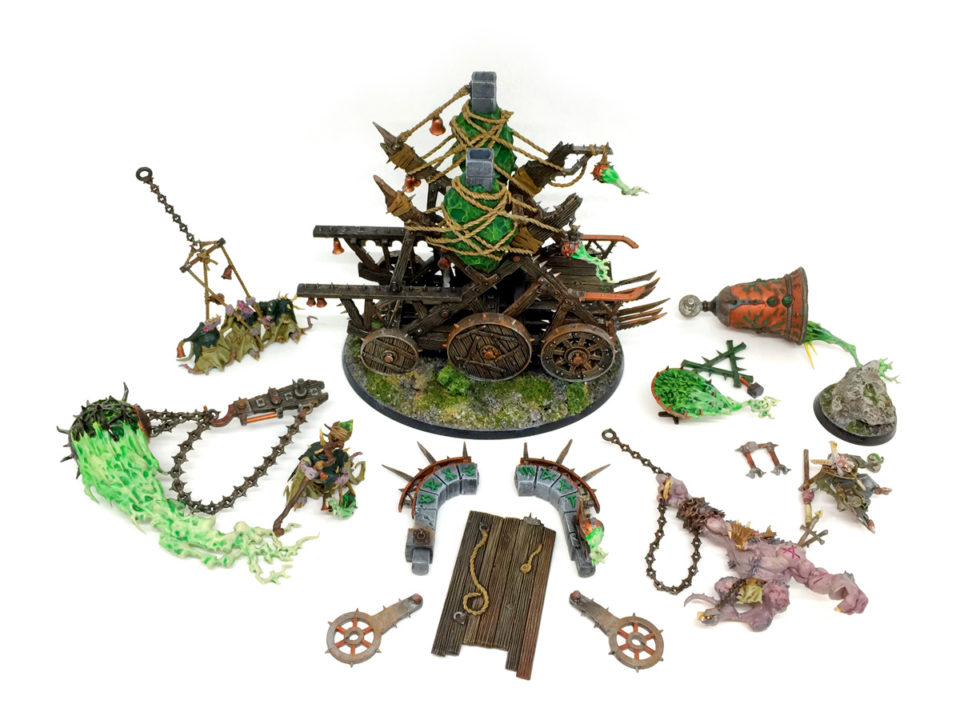 I still haven’t caught up on photographing my backlog of painted models since I started this hobby, so these models are all about 2 years old. More importantly, they represent my first “completed” Warhammer army, including spells and special terrain…and it only took me 2 years to get there!

Check out the first half of my army HERE

Slogging through my last battleline units

You see, anyone can paint up a few big monsters, but it takes a REAL hobbyist to sit down and paint 40 of the same units to make enough “battleline” units for a legal 2000 point army. The sad thing is, after doing just that here, this army is only “legal,” I’d need to paint another 40+ battleline units to make it “good.”

After pushing through to get the minimum “two sets of ten” clan rats for a 1000 point army in the last post, the rules changed and 20 was the new minimum. Luckily, a buddy of mine donated a full package of Stormvermin to the cause, so I had 20 more models that counted as battle line and could be taken in groups of 10. I also painted them in batches of ten as that’s about my limit for “and, one more pair of boot details…”:

I mostly kept the colors aligned with the rest of my army (it’s always a balance between “boring” and “disjointed” when picking army color schemes—I tend to lean towards the former). I did add Screaming Bell colored armor on these guys to signify their elite status and make them stand out from the Clanrats.

The second batch was a little less detailed:

Hell, I didn’t even bother to put nipples on the skin drum this time!

I also magnetized them (though, unlike my Plague Monks, I only did the leaders so I could run them as a group of 20 instead of two 10s once I got around to painting more someday (Stormvermin in units of 10 kind of suck):

Most people would just run the extra flags and drums and call it good, but no, I’ve got to show off with the tiny little magnets. Speaking of…

Two for one war machines

All armies have a big centerpiece model that just looks plain badass, and for the Skaven it is the Plague Furnace:

I mean, just look at that, they ripped an entire archway out of the ground, slapped it on a wagon and then covered it in spikes, chains, and some kind of poison spewing ball of death that can be thrown all over the battlefield!

The problem is, Skaven have ANOTHER big centerpiece model, the Screaming Bell, and it looks even cooler, but who has the money to buy both? Once again, magnets are the answer, as all the pieces for both come in the same kit. So, I added tiny rare earth magnets to…EVERYTHING:

And made a single model that can be converted into both:

This even left an extra Grey Seer or Plague Priest depending on which one you use!

A note on painting these up. Obviously, do it before you glue it all together. And, I know Warpstone doesn’t come in chunks that big, but I highly recommend painting the bottoms of the arch green…it gives a much needed pop to what would otherwise be a very brown and grey center mass.

Skaven do ok with range, but more never hurts, and I managed to pick up this bootleg Warplock Bombardier for a couple bucks, and damned if he doesn’t look like the real thing:

Hell, my first game with him I rolled boxcars on damage and nailed my opponent for 12 wounds, so, the $5 was worth it. Speaking of bootleggin’…

All I needed to finish off my army was to paint up 3 Gnawholes (little portals your can start the game off with), and one last spell. Gnawhole kits were a little pricey, so I bought one real one, made a mold…sold it back on ebay, and then made 3 for myself from the mold:

It wasn’t the crispest mold job, but painted up fine (you can see some wonky areas on the center lightning if you look close):

I mostly did the mold here because it looked so easy to mold (and because I wasn’t planning on adding all the ropes and scaffolding anyway since it would interfere with units moving on/in it).

Most of the Skaven specific spells looked a little underwhelming (either rules wise or visually if you consider their “Vermintide” of about 12 rats). The Warp Lightning Vortex looked pretty damn powerful on paper though, so I went ahead an painted them up:

I realized I shouldn’t have used the green wash on the lightning, it’s not really working here, but for a quick drybrush job they turned out ok.

Let’s get these on the table

With all that work done, time to play! It really is the best feeling to spend all this work on an army and finally play a full game with a 100% painted army: