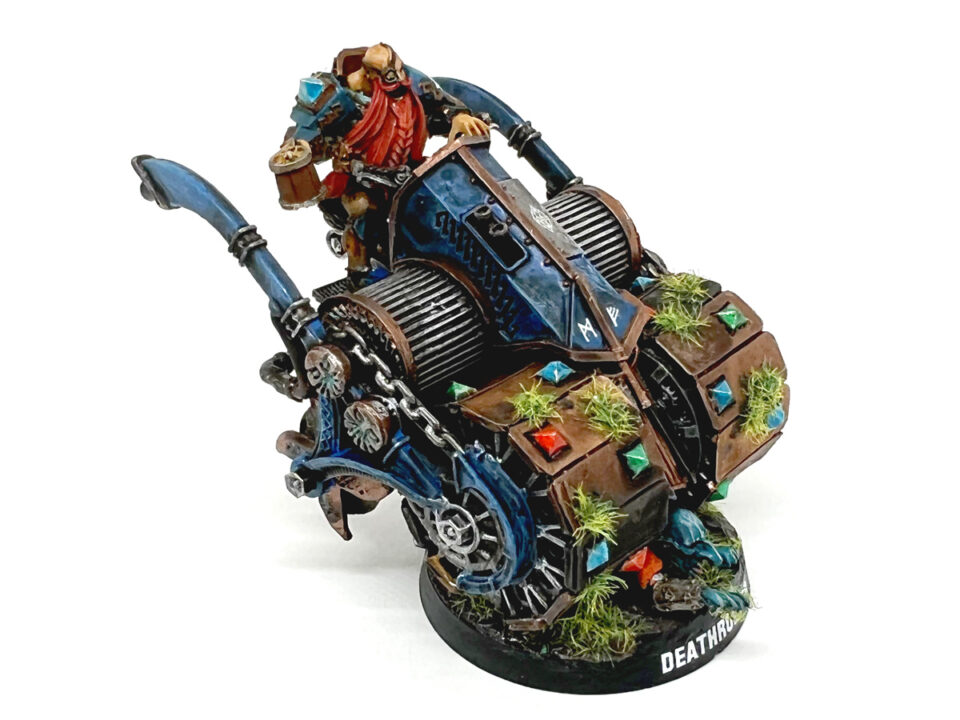 I’ve talked before about how Games Workshop, despite the name, isn’t great at designing “games.” For all the work I put into my Warhammer armies, I’m not about to go recommend the actual game to anyone who doesn’t also want to paint the best miniatures on the market. However, Bloodbowl is a game that has somehow made it through decades of shoddy playtesting as a remarkably robust little push your luck football game. Sure, there is no way in hell it needs 90 percent of the fluff special abilities–and only teenagers and old men have time to play the “league” version “where it really shines”–but the heart of the system is really pretty damn fun.

Thus, it had been bumming me out that I had a half painted Orc Bloodbowl team hanging out on my paint station for the last two years as I dragged my feet in finishing them up. My painting has slowed down lately, but there were a lot of reasons it took me so long on the Orcs. Mostly because I hate painting the same thing over and over, and I had 12 of these guys to paint. Then I picked up the four extra Forgeworld add-ons making even more of the same thing to paint over and over. But also, because I picked Troll Slayer orange as the main armor color, and that has to be the worst paint GW has ever put out. Still, 4 coats later, I gritted my teeth and pushed through the last team (having already gritted my teeth and pushed through the dwarves a few years ago) and finally got a playable Blood Bowl Set.

I started with the Dwarves as they are probably the best team to play out of the box (just fielding the 12 you get gets you a pretty good team, and they are easy and effective to play). I don’t love painting the details on dwarven armor, but they went fast enough I suppose. They were also my first try at decals, but I ended up really liking the contrast the white decals added (especially since I don’t really do any kind of highlighting when I paint).

Just soak the decal in water, and then apply with Micro sol and set:

Easy enough for a quick pop of white contrast!

Next I had two Forgeworld (via China) special units that were cheap enough they might actually see play in a game or two, first Barik Backblast (who has some cute rules for making a hail Mary pass actually playable):

And second, the mighty Dwarven Deathroller!

For all the dwarven gemstones I used a basecoat of Stormhost Silver, with the Citadel gemstone paints over that.

Orcs wouldn’t have been my first choice for a team, but I had a cheap copy of the old base set, and I wasn’t about to paint up fucking humans, so Orcs it was.

As mentioned above, painted in the dreaded Troll Slayer Orange (apparently the new orange contrast paint actually works really well, I’d use that next time), and the same Moot Green skin I used for my Underworlds orcs. Then white shirts for a pop of contrast, and Deathworld Forest Pants to complete the ensemble.

I don’t actually need that many Orcs, but I got ahold of a set of forged Forgeworld add-ons (Orcs really need a few more Big-uns and Blitzers), so I just went ahead and painted everything I had–otherwise I would have left a few throwers and linemen on the sprues. The Forgeworld stuff has the added bonus of being in different poses:

I also painted a Forgeworld Armored Troll, which is a better fit for this team as I’m not throwing any goblins around anytime soon:

As you can see, I had some fun with the blood spatter…

Now that everyone is painted up, time to get this game to the table! First, set up the field:

Then, sit and stare at it wistfully until you get everyone in your family to try it out with you:

I honestly think my 4 year old liked it the best–still, I maintain it’s a good game!