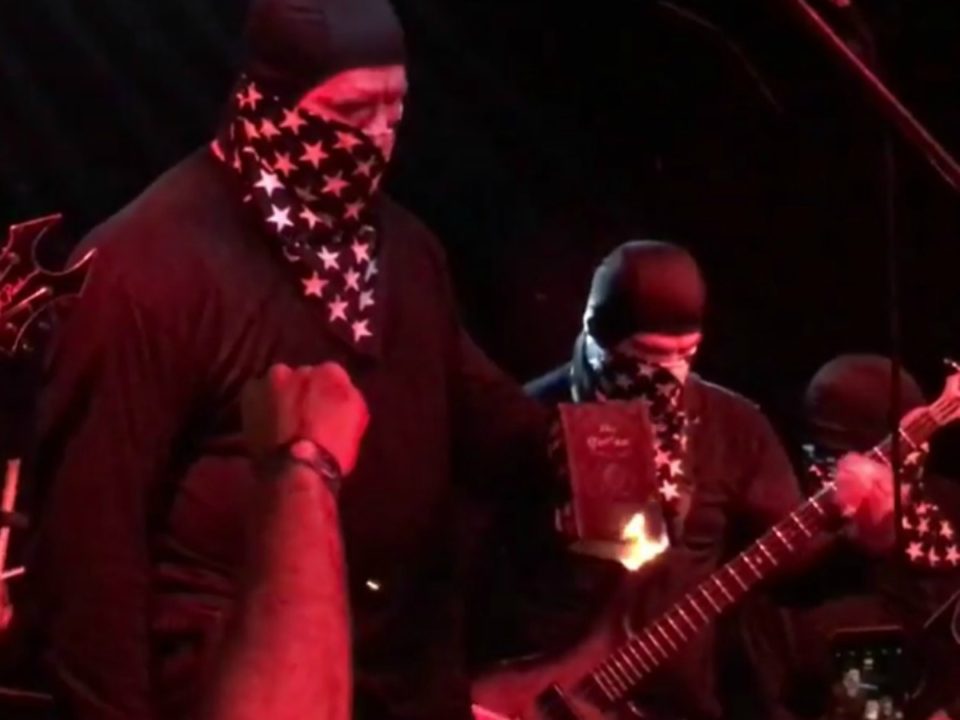 No heavy metal sub-genre positions itself more firmly in opposition to Christianity than black metal–most famously seen in the wave of church burnings across Norway in the heyday of the early 90s second-wave scene.  And, Kerrang sensationalism aside, black metal really does establish itself firmly against Christianity in the vast majority of its imagery and lyrical content.  This, in what has to be a surprise only to Tipper Gore, is all actually fairly socially acceptable by now.  Trashing Christians is almost quaint these days as far as forms of rebellion go.  Here in America, a whopping 75% of the country identifies as Christian, and, indeed, the old white men who both rule this country and attempt to impede social progress at every opportunity are exclusively Christians.  So, hell, trashing Christianity is just like, fighting the power, man.  Turn [the cross upside d]o[w]n, tune in, drop out–who knew black metal’s opposition to Christianity was stealthily attempting to effect positive change in our current society?

Now, philosophically speaking, if attacking Christianity is ok, then surely it should be fine to attack other world religions too, right?  And hell, attacking Islam is even better since everyone claims that Muslims, somehow, are even meaner to their women than Christians.  This “if attacking Christianity is fine, then attacking Islam is even better” attitude was exactly the attitude taken by both insider fans and mainstream outsiders when anti-Islamic content first surfaced in black metal.  Take, for instance, this article from The Atlantic in 2012 about a female Iraqi black metal musician Anahita:

Now, even though Anahita (and her entire “anti-islamic” Iraqi black metal scene) was later discovered to be a hoax, it is important to note how her anti-Islamic lyrical content is depicted as brave, ground-breaking, and socially commendable.

Or consider this 2015 Vice article about an anti-Islamic Saudi Arabian black metal band of brave heroes standing up to a religiously oppressive culture:

I mean, these articles aren’t wrong, it IS brave to stand up to an oppressive power structure, especially when the penalty is to be fucking executed.  HOWEVER, around the same time Anahita’s story was making waves, other anti-Islamic black metal bands started cropping up more and more often throughout the underground.  And, despite more and more of these bands being, not from Muslim majority nations, but rather from Europe (and, later, North America), the general sentiment in the metal underground was “good, about time Islam got some heat, it’s almost even worse than Christianity!”

The issue here, is that when an Saudi Arabian band fills an album full of anti-Islamic sentiments, it is an act of rebellion against an oppressive religious state.  But, when a European band fills an album full of anti-Islamic sentiments, 9 times out of 10, it’s just because they don’t like brown people in their country (1 time out of 10 its because they got all worked up about that Anahita article they just read and wanted to join the struggle).  Islam might be just another religion like Christianity, but, the critical difference that most of the supposedly “non-racist” black metal underground seems to be missing when they praise the “message” of anti-Islamic black metal bands is that Islam also happens to be a religion predominantly practiced by BROWN people.  Also, these particular brown people happen to be the Mexicans of Europe–ie, Muslims specifically are blamed for coming in and taking all the European jobs that the white people don’t actually want to do anyway.  And if you think your racist uncle from Texas is bad, you should see the European black metal underground when they get worked up about Muslims in THEIR country.

It’s not just Europe anymore either, across the world, slamming on Islam has become a bridge of common ground between both racist white dudes and white dudes that have a black friend or two depending on who you ask. After all, this is Trump’s America now, we’re going to have a foolproof wall for our Mexican problem, which only leaves Muslims as our last vilified “other.”

So, this is the state of the black metal underground right now.  The neo-Nazi scene is embracing anti-Muslim imagery with increasing frequency, and the non-neo-Nazi scene is accepting this as an innocent variation on the usual anti-religious sentiment that has always been found in black metal.  This kind of stealth racism isn’t without precedent, after all, Grand Belial’s Key has been doing the same thing with Judiasm since the early 90s, and it has afforded them a certain level of “mainstream” respectability that a more brazen form of antisemitism (ie, one that didn’t hide in plain sight by pretending to be religiously motivated) would have denied them.

Now, I’m not saying that Islam is NOT a steaming pile of dogshit right up there with Christianity’s own steaming pile of lambshit.  And I’m not saying that Islam should not be criticized for fear of being an “accidental racist.”  And I’m not even saying that anyone needs to refrain from listening to anti-Muslim bands.  All I’m saying is that it’s time for the black metal underground to quit kidding itself and admit that his whole new anti-Islamic undercurrent that has so often been lauded as a nice progression from the usual overdone anti-Christian themes is pretty obviously racially, rather than religiously motivated.  After all, when you find yourself on the same side as people like this: 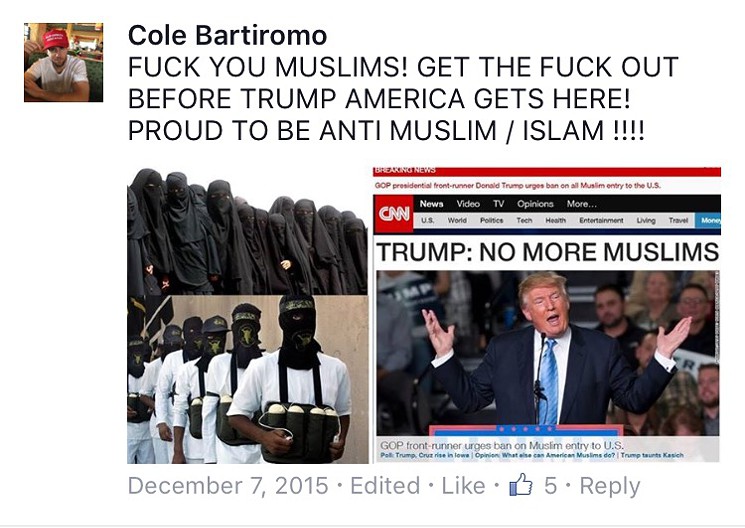 …at the very least you might want to take some time to at least understand the motivations behind the content of the music to which you are listening.  Even if it means you are going to end up getting called a cuck.

True, I could be misinterpreting all those sieg heil salutes at that Moharebeh show…

It’s all fair game nobody cries about anti Christianity but oh no we can’t do the same with other religions! Bullshit!!!

Wtf is racism ? U’re doin great if u are slaughtering muslims let alone being racist

FUCK MUSLIMS!! And liberals who help them

There seems to be some confusion–all my post says is that SOME people don’t realize that anti-Muslim sentiment is rooted in the desire to oppress a specific cultural group rather than in a general hatred for religion in general. From what I can gather from these comments, it seems you guys understand this distinction, so I’m not sure what you’re arguing about here.