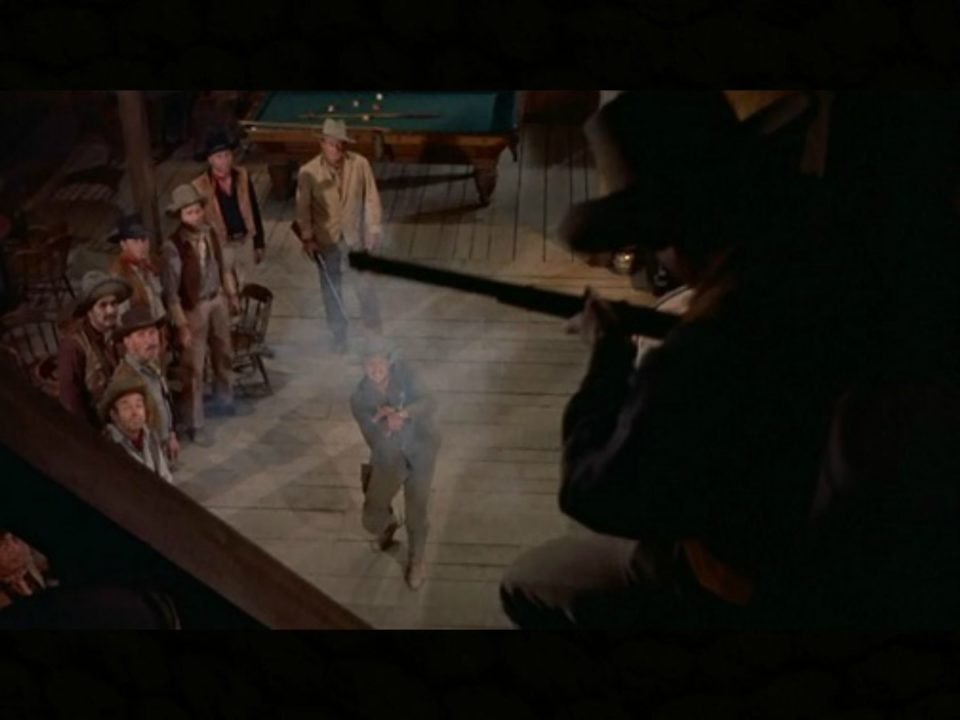 So there it is, Saturday night, and I’m sitting at home with a Breckenridge double IPA watching a movie (instead of “clubbin” like usual). John Wayne and Dean Martin have just seen the man who shot their friend run into a bar full of men who would like nothing better than to kill them too. Dean Martin has been the town drunk for two years, but this time he wants to go in the front door, he’s tired of going in the back. “Do you think you’re good enough?” asks Wayne. “I’d like to find out” replies Martin, to which Wayne nods “so would I”. I catch myself nodding too. Wayne covers the room from behind while Martin goes in the front. His control of the situation teeters precariously, but finally, after a great deal of tension, Martin proves he is not the man everyone calls “Borachon” any longer. Panicking, a man in the back reaches for his gun on the floor. Wayne turns on him and snarls, as only John Wayne can, “You want that gun? Pick it up. I wish you would.” I’m not ashamed to admit it; I catch myself saying it along with him. Rio Bravo is just that awesome.

Howard Hawks is a director who gets a great deal of man-love from myself on this blog, and it is all fully warranted. I mean, that guy mastered every genre he worked in, and the good old fashioned American western was no exception. I vacillate between choosing Red River or Rio Bravo as my all time favorite Howard Hawks western, but hell, who says I need to choose just one. So today I’m writing about Rio Bravo, read my blog long enough and I’m sure you’ll come across a Red River review too.

Rio Bravo was made as a reaction to High Noon, a movie where Gary Cooper spends the whole movie trying to get the townsfolk to help him hold off the gang of bad guys. Hawks (and his star, John Wayne) thought this was just un-American. Americans don’t ask for help, and definitely not from amateurs. So when John Wayne finds out he is holding the bull by the tail, he doesn’t go looking for help, he faces the problem with a Hawksian professionalism, refusing offers of help from amateurs. The world of Howard Hawks is all about respect and professionalism. It isn’t so much important that Wayne and Martin find the killer in that bar; the important thing is that Martin “goes in the front door”. Wayne respects the professionalism of the young gunslinger played by Ricky Nelson so he allows him to help just as he does the grizzled old cripple played by Walter Brennan. What we end up with is quintessential Hawks as a group of professionals just do their job.

This focus on groups is one thing that has always appealed me about Hawks; he really gets into the complicated details of group dynamics. In Rio Bravo, you have a drunk trying to get his life back together, an old cripple trying to stay relevant, a young gunman trying not to be like every other young gunman and presiding over it all is the indomitable Sheriff. How they interact with each other is just as interesting as how they get out of the mess they have found themselves in.

Of course, the group interaction is helped immensely by the excellent leads. John Wayne, what else is there to say about John Wayne, he is an American icon and only Cary Grant rivals him in natural screen presence. He might only play “John Wayne” in every movie he is in but he is never less than completely believable. His acting is so strong he actually improves the performances of everyone around him (check out one of my early blog posts here for more on this) Wayne effortlessly establishes himself as the nucleus about which the rest of the film revolves. Even when he is off screen his presence is felt. This is not to give all the credit to John Wayne, the other performers all do their part. Dean Martin was never a very deep or incredibly versatile actor (though he was always undeniably likeable), but here he actually gives a very good performance as the drunk who is trying to get back on his feet. Walter Brennan was the finest character actor ever, and he shows why here as Stumpy. He manages to steal every scene when he hobbles in and talks about how he’s liable to “start blastin” and how he can “practical gur-an-tee it”. Ricky Nelson is a little wooden, but aside from the previously mentioned boost he gets playing opposite John Wayne, his performance is good natured enough. Angie Dickinson as the implausibly young love interest can be a bit grating, but she isn’t so bad either.

Along with the solid performances, the film craft is flawless. There is no flashy camera work; almost every shot is framed at shoulder level with much of the movie taking place indoors. And yet it is not a dull movie to look at. There is a real sense of claustrophobia in play as the heroes desperately try to hold on to a town that is increasingly under siege. Hawks mastery of narrative is in full display here too as he takes deceptively complex plot and makes it seem like a rambling, laid back movie that even finds room for a song or two from Dean Martin and Ricky Nelson. The sight of Dean and Ricky singing while Walter Brennan taps his feet and John Wayne sips his coffee with a big shit eating grin on his face is pretty much cinema gold in my book. And the fact that Hawks was able to make it fit seamlessly within his movie just shows how adept he was at making a movie for the masses (after all, teen idol Ricky Nelson was only in the movie to draw in a younger audience) and yet still creating a serious work of art.

Rio Bravo is a populist movie, don’t get me wrong. The 1959 audience got exactly what it expected, but that should not be a strike against it. In my rather rambling post on action movies that ended up not having much of a conclusion, I should have looked a bit more closely at Rio Bravo. The film is designed to entertain, but the master’s hand is present at every turn. So I don’t want to hear any apologies from anyone who likes good old fashioned entertainment from a master craftsman and still hasn’t seen Rio Bravo. As John Wayne would say, “Sorry don’t get it done”. Go check it out!