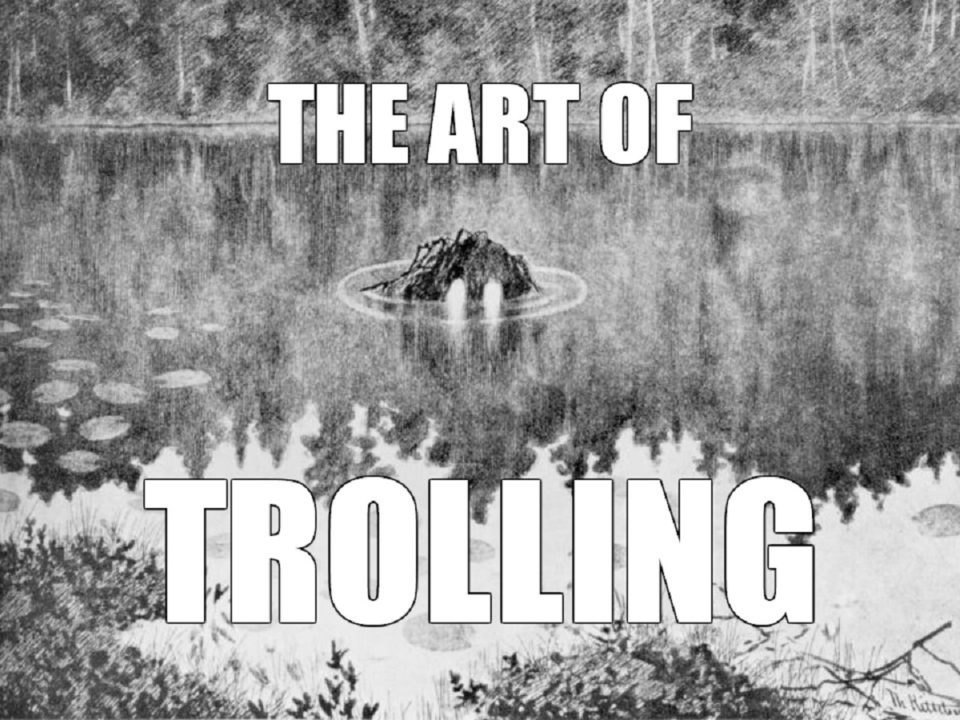 Today we will look at one of the most powerful tools in your troll arsenal–reductio ad absurdum, ie, reducing someone’s argument to an absurd position. Reductio ad absurdum is an argument technique that basically says “if you believe X, then this totally absurd thing Y would logically follow, so, stop believing X.” This doesn’t necessarily mean X is completely wrong, just that you might need to adjust some of your premises (which, all arguing is is figuring out which premises to adjust anyway).

Now, troll-wise, reductio ad absurdum is typically accomplished by bad-faith interpretation of your target’s premises to claim some absurd situation naturally follows (when it actually doesn’t). However, today’s example looks at a case where you can use a good faith reductio ad absurdum argument to cause your troll targets to unwittingly take both sides of a position without actually knowing they are doing so until it is too late.

Safety note: using good-faith arguing tactics while trolling is, of course, dangerously close to just “arguing online,” but the payoff on this one is typically worth the risk!

Today’s example actually started as a serious attempt to discuss a rules issue with a Games Workshop tabletop game (Warcry) that just came out. I will attempt to spare you all the gory details, it basically concerns a poorly worded section on “cover” in the game. Typically, in war games, if you try to attack someone standing behind a low obstacle, they will get a defensive bonus.

However, with the way the Warcry rules are phrased, you can actually get this bonus even if you and your target are both on the same side of an obstacle. Same side cover is not unheard of, but the way the rules are worded, with careful positioning, you could game the rule to get cover for yourself ONLY, but not your opponent, even though you were both standing right next to the wall–which seemed less than ideal as far as simple, intuitive rules go.

That is all you really need to know, but here is the actual rule for those into that kind of thing:

Anyway, I put up a polite post in the Facebook Warcry group pointing out that it felt weird that you could get “cover” from a unit if you were both on the same side of a wall, and even weirder that, depending on where you placed your miniature, you could even manage to deny them cover while getting it yourself.

What followed was a 200 post dumpster fire of people claiming “THE RULES ARE FINE” and attempting to explain how it’s hard to fight next to a wall and the rules model this. It got ugly, I got sucked into arguing my side…FOR REAL…the thread got deleted before I could screenshot any of it, bottom line, mistakes were made.

Thus, I decided to return with a reductio ad absurdum argument, only this time I would be arguing the absurd point myself in an attempt to catch a few people from the previous day’s thread arguing against the rule they had been defending (if you are going to good-faith RaA troll, you’ll probably want a two-part setup like this situation). Anyway, here’s the initial post:

Again, this cheesy-ass tactic follows directly from the rules, gives you a significant advantage, and is easy to pull off against an opponent who hasn’t heard of it. I’d never allow it at my table as micromanaging distances like this to abuse the rules isn’t a fun time, but let’s see what the people who claimed the RULES WERE JUST FINE think of this:

David with the sensible take, and then, BOOM, Bartosz (one of the big proponents of “the rules are just fine” the previous day) decides to double down. This is the beauty of reductio ad absurdum. If you argue the absurd point, and they agree with you, they look ridiculous. If they disagree with you than they lose their previous “the rules are just fine” point. Win win!

This was followed by continued trolling from myself, and a new group member response:

Completely ruining the impression of the Warcry Facebook group for a new member was a delightful bonus for this trolling attempt!

Also, if you wade into a comment section and see a shitshow like this, Joshua’s response to post the classic trash flinging trash truck GIF is really the only acceptable one:

But I wasn’t here for people that were too good to play in the mud, I was here for people like David, who, when confronted with the absurd, just stick their heads in the sand further.

Meanwhile, Jeff, in his rush to defend the rules, doesn’t read the example carefully enough to realize that making them move closer in place of an attack is the whole point of “mime walling” (which I was determined to make “a thing”).

Always pretend the comment you are arguing against has made your point and that you both agree. Nothing is more infuriating than someone thinking they agree with you when YOU KNOW THEY DON’T!

Nathan was another success story in an increasingly successful troll as Nathan was one of the ones who had, on the previous post, been arguing passionately in defense of the rules–claiming they modeled, and I quote, a defender that “didn’t leave himself enough room to swing his weapon.” He was doubling down on that, but still refused to believe that Mime Walling™ would actually work.

That exchange went on for a while before Nathan conceeded that MAYBE Mime Walling was a good tactic, just NOT AGAINST HIS TEAM.

How successful was this troll? So successful that it managed to get Dan to pull a classic “lookout we got a badass over here” response:

Every troll thread has one!

New member Jason continued to be confused as to why people thought Mime Walling was “cinematic,” while Mateusz joined team “EVERYTHING IS FINE”:

Remember, when trolling, nothing pisses people off more than that condescending Morgan Freeman picture. Also, as a side note, on a previous thread, MULTIPLE people suggested swinging an actual weapon next to your wall to prove their point as to why this was a good rule.

Here’s the thing about Games Workshop Kool-aid. The models look amazing. The cost is ridiculous. So, if you love the look of the models so much, and are desperately trying to justify the ridiculous amount of money you spent on them, it becomes very hard to objectively critique the game, let alone admit that some rules could be cleaned up. Phil was a staunch defender on the previous thread, and he wasn’t about to give in when confronted with Mime Walls.

At least some, if not quite yet on team “the rules might have some problems” were at least on team “ok, fine, this isn’t cinematic”:

Ryan waded in and tried to be reasonable, only to be countered by Mateusz desperately trying to use his vast knowledge of real life fights to pretend that Mime Walling was a cool little byproduct of an airtight ruleset:

Cue Gavin charging in with an “up your arse” and the thread getting locked 55 minutes and 100 replies from posting:

All in all, a successful troll (and thankfully one that I screenshotted right before it got deleted). The biggest weaknesses were:

Still, people got wound up, internet badasses appeared, and the thread got locked and then deleted. Weaknesses aside, I’m calling this one a success!

Though, if I have a complaint with the results, it was that I never quite got “Mime Wall” to catch on, despite my best efforts. I was also surprised that no one tried to shut down #MimeWall via meme: