My third favorite movie in the whole world: Play Time 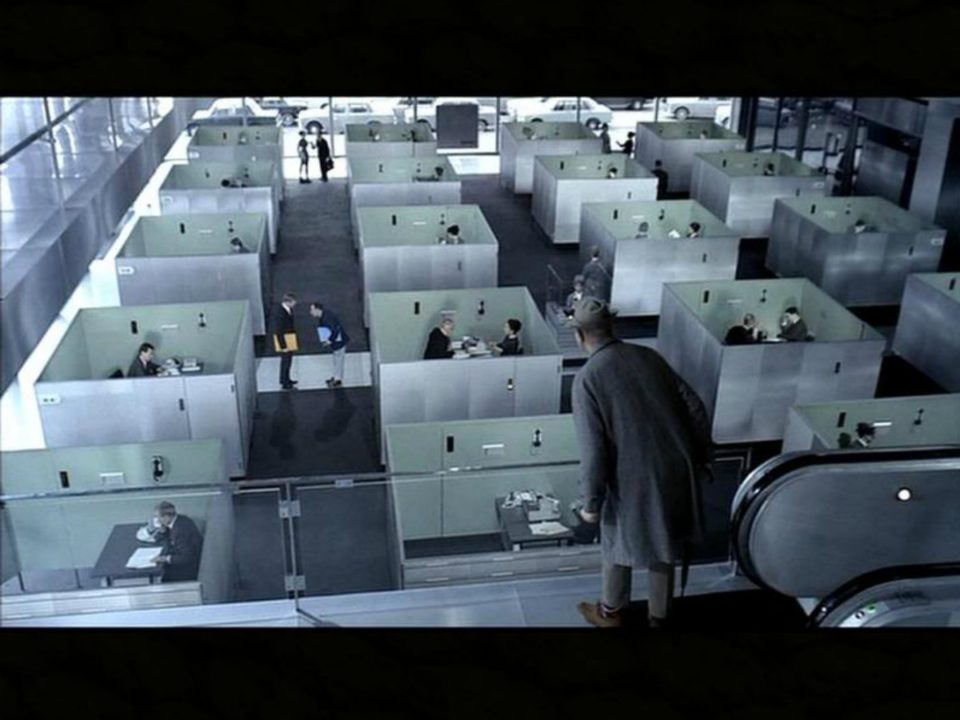 This series of “my favorite movies in the whole world” is going to get increasingly silly as no one can really say what their 34th favorite movie of all time is, but since we’re only at number three, I’ll probably keep going for at least a few more entries.

Play Time is an overwhelming movie. What little plot there is involves two hours of a man trying to find another man for a job interview during the day followed by the disastrous grand opening of a restaurant that night. That might not sound like much of a movie, but Play Time is no ordinary movie.

The director, Jacques Tati, could care less about plot, dramatics or dialog (in fact, I usually watch Play Time with the subtitles off–and I don’t speak a word of French). At its core, Play Time is the ultimate people watcher’s movie. Tati had decades of experience as a mime (yes, my third favorite movie in the whole world was written, directed and acted by a French mime), but rather than mimicking the actions of those around him he prefers to merely wander through the world as an observer (playing, as always, the inimitable Mr. Hulot). In Play Time, this world he observes is a modern Paris constructed entirely of glass, steel and concrete. This sterile environment is filled with crowds of tourists and Parisians while the film merely follows Hulot and other assorted characters as they interact in their modern technopolis.

Filmed without a single close up, Play Time is a jaw dropping exercise in mise en scène. I never thought I would see a director who could make Sternburg’s intricate placement of objects and actors on the screen seem restrained by comparison, but Tati takes this kind of complexity to an entirely new level. Tiny people scurry across his wide screen providing dozens of points of interest in the image. By the time the movie reaches its restaurant grand opening finale, the screen is so completely packed with information the mind reels. Why did they show that guy? What did she pick up? What were they doing? I could watch any ten minute section of this sequence countless times and still not “get” everything.

As an example of the strange type of “gags” that this movie is packed with, at one point a random lady unknowingly drops her bag while in an airport. Watch very closely or you will miss it. If you continue to watch closely, you can see a man pick it up and hand it to her. A few minutes later, when that minor detail is all but forgotten, the lady is held up at inspection as they go through the contents of her bag. Is it funny? Not really, but Play Time is packed with these types of things, sequences that are almost beyond humor.

The movie is a comedy to be sure, and you will find yourself chuckling, but overall, the gags are so incredibly complex that the viewer almost feels pride rather than mirth at “picking up” on one of them. This is the humor of everyday life. Tati has always said that if you look long enough, everyone in the world is funny. So, while there are gags of astounding complexity (so complex that I have to resist the urge to describe them here–brief seconds of screen time could fill pages were I to describe the myriad ways in which some of the gags “work”), and situations of almost absurd silliness, the humor always has the subtle and realistic comedy of everyday life.

The importance of the film’s central character, Mr. Hulot, should not be downplayed. Wandering in and out of the film, he is more of a Buster Keaton force of nature than a Charlie Chaplin “gag-man”. Hulot is the glue that holds the cast of thousands together. I would estimate that he is only on the screen for about 2/3rds of the movie, but his presence is always felt. In fact, this may be the thing that elevates the movie from undeniable masterpiece to “Third Favorite Movie of all Time” for me: Hulot stands out from the masses.

Play Time is a film about our faceless modern society. The great art of the past can now only be seen in the reflections of our contemporary monuments (literally in the case of the movie). Throughout this antiseptic wasteland humanity wanders to and fro, squawking its puny efforts to stand out into a great cacophony of nonsense. And yet, when Mr. Hulot walks onscreen with his familiar gait of barely restrained urgency, we are suddenly presented with an individual. One realizes that this man is different from the rest. He wanders a separate path, he has not been lost in the crowd. Tati’s Mr. Hulot is a part of the world and yet he exists alongside the masses instead of with them.

Perhaps there is more to the barely recognizable plot of the movie after all. Mr. Hulot spends the first half of the movie attempting to find a man about a job. They do not find each other in time and he is unable to become a functioning member of society. He spends the second half of the movie inadvertently witnessing and contributing to the destruction of a swanky restaurant on its opening night. Again, he is the fly more than the ointment. Hulot’s observations of the people around him bring their absurdity into focus whenever he wanders into the information packed frame.

Of course, all this is not immediately apparent. My first viewing of Play Time was rather incomprehensible. I had no idea what I had just witnessed. I think the brain tends to shut off on overload, and the constant wondering of “what did I just miss?” pushed me into mental exhaustion. But further viewings, with the subtitles off (really, you don’t need any more distractions in this movie) while I let the film wash over me have really blown me away.

Tati was operating on an entirely different level for Play Time, and I can’t imagine there will ever be another movie quite like it. I’ve said it before, they should send this movie along with a Dashielle Hammett novel and a Bach cd on any future space probes to show what humankind is capable of.
Tati was either an authentic whacko or a certified genius. I have to go with genius.

I should, in all fairness, point out that my “Hulot as an individual in an existentially absurd world” argument does not completely hold up. I doubt Tati’s true intention was to show how cold society is, but rather how dangerous our new modern world was to basic human interaction. In fact, even by the end of the film, there is a certain level of camaraderie displayed by the diverse cast in spite of the “modern” obstacles. But hey, they’ll take away my PFC (Pretentious Film Cock) card if I don’t come up with something new and “boundry pushing” in this review. That, and the movie really does make me appreciate Tati’s individualism over the “masses”. Sue me 😉