Travels in Middle-earth 75: The Three-farthing Stone 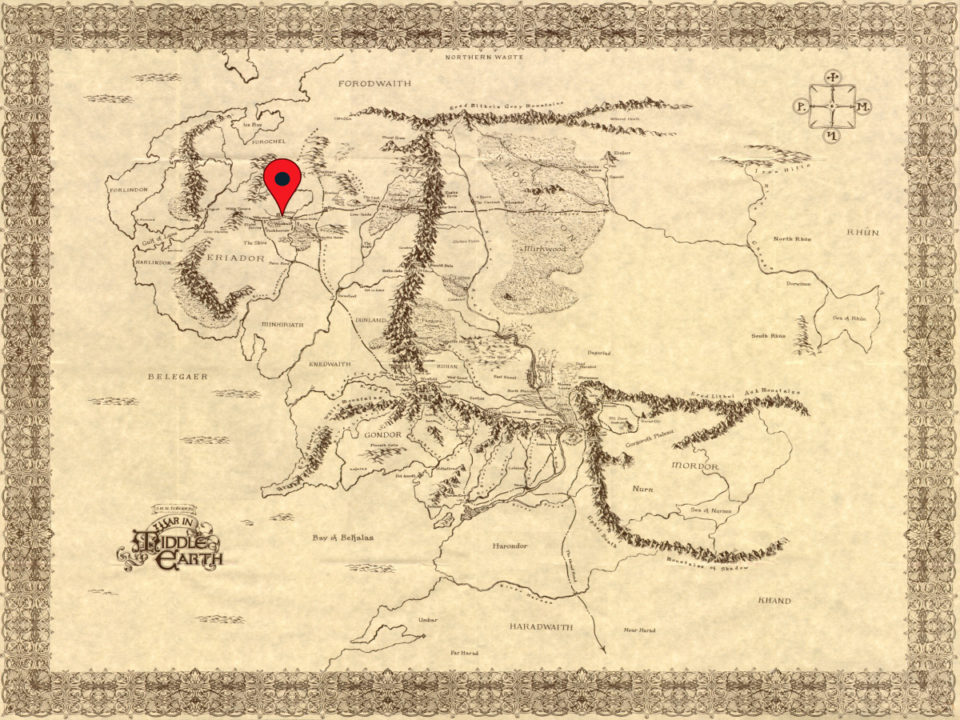 Long ago, in an Age of the Sun far removed from our own, our world was a place of enchantment and lure undreamed of to our current race of Men. However, not all of its wonders have been lost to the mists of time. In this series, I will use advanced crypto-historic techniques to transport you to an elder time–a time of wonder and heroic adventure. For today’s travels, we will start at the center of it all, in the very heart of The Shire.

‘Now get on!’ said Merry, and after that the travelers saw to it that their ponies’ pace was quick enough to push the Shirriffs along as fast as they could go. The sun came out, and in spite of the chilly wind, they were soon puffing and sweating.

At the Three-farthing Stone they gave it up. They had done nearly fourteen miles with only one rest at noon. It was now three o’clock. They were hungry and very footsore and they could not stand the pace.

‘Well, come along in your own time!’ said Merry. ‘We are going on.’

‘Good-bye Cock-robin!’ said Sam. ‘I’ll wait for you outside The Green Dragon, if you haven’t forgotten where that is. Don’t dawdle on the way!’

‘You’re breaking arrest, that’s what you’re doing,’ said the leader ruefully, ‘and I can’t be answerable.’

‘We shall break a good many things yet, and not ask you to answer’ said Pippin. ‘Good luck to you!’

If Middle-earth was the heart of Arda in the Third Age of the Sun, the Shire was the heart of Middle-earth. A small, unassuming haven in the middle of the wild, peopled by simple folk, who were two steps removed from the troubles of Middle-earth. Whether it was some kind of unfathomable aegis from a silly man in yellow boots, or merely the product of preternatural luck combined with geographical insignificance, The Shire was largely free of the turmoil that plagued the surrounding areas through the ages.

Split into four “Farthings” (one for each cardinal direction), the West, South, and East farthing met at a single point in the geographical (or near enough by hobbit reckoning) center of The Shire. This center point was marked by the Three-farthing Stone (the less geographically central Northfarthing point ten miles to the north was deemed less Stone-worthy), which had stood over the great East Road through the centuries–worn and weather-beaten, but as steadfast as a tree stump with roots too deep to move.

Its importance to the Hobbits as a location was apparent when Sam chose the stone to scatter the remaining earth he was given by Galadriel from her orchard. The saplings he had previously planted about the shire grew as if “time wished to make one year do for twenty,” and they were planted with but a single grain of the earth each–so you can imagine the burgeoning flora that must have spread out from the Three-farthing stone in the years after the War of the Ring.

A symbolic marker, yes, but one that came to be imbued with real Elven magic at the moment Sam scattered the last of the dust from his garden box about its ancient base. And, as the years passed on, so too did the verdant life spread out from the stone, healing both the wounds that had been wrought upon the once peaceful Shire, and the injuries dealt to all lands of Middle-earth by Sauron’s malice.