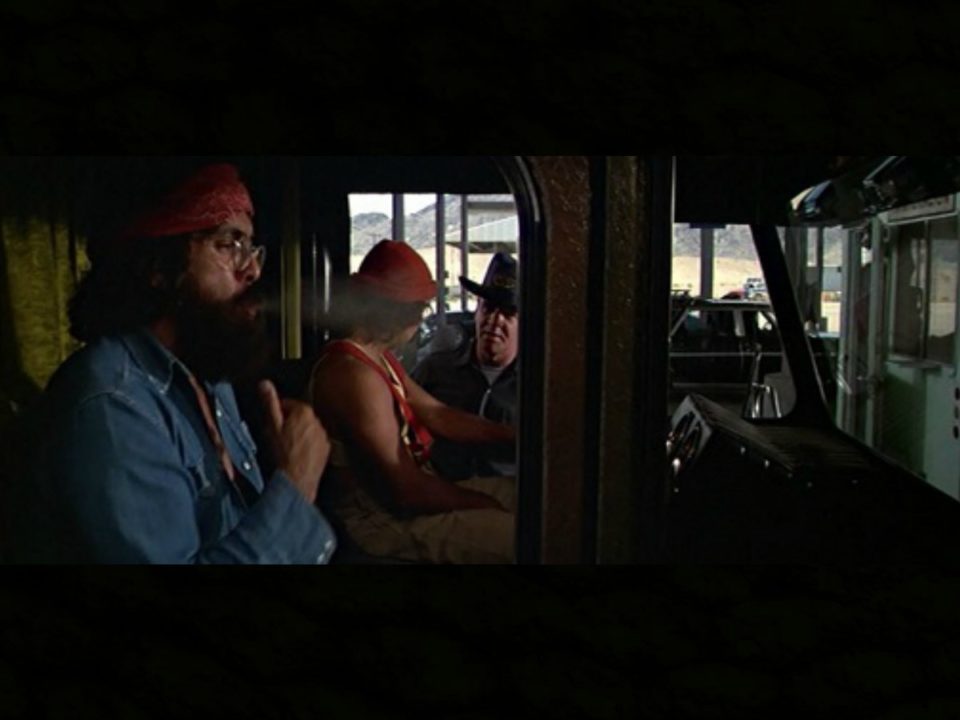 I was never much of a drug user.  I mean, sure, like everyone else, I’ve tried plenty in my time, but I just couldn’t ever get anything to stick I guess.  Hell, I don’t even drink to get drunk (though, to be fair, that Scotch I drink is too expensive to do something as barbaric as use it to get drunk).  And yet, the humor of the stoner comedy is so universal that today’s movie, Up in Smoke (the prototypical example of such a film…assuming you don’t count Reefer Madness), still leaves me cracking up no matter how many times I’ve seen it.

I understand the argument that stoner comedies simply glorify the human race at its worst; humanity is shown in a state of self-inflicted extreme stupidity that such films seem to be saying should be commended rather than avoided.  And yes, there is merit to this argument, stoner comedies from Cheech and Chong on have undoubtedly been bad influences upon impressionable teens since Cheech first pissed in that laundry basket.  On the other hand, is the chaos and stupidity any different from the silent comedies I love so much? Is Buster Keaton shooting a fish in the bottom of his rowboat with a rifle any different than Chong obliviously trying to break back into a house that is currently being raided by the police?  There is something inherently funny about the sight of a human who can walk through the world like a tornado of idiotic chaos and still emerge out the other side unscathed.  While we as humans maybe shouldn’t strive for the levels of stupidity seen in your typical stoner comedy, there is still something ennobling about elevating these burn out idiots to hero status.  They are the underdogs, the inner “Terrible Idea” within each of us, and by holding them up as worthy of the highest praise, the stoner comedy is a great yes to the many nos of human existence.

Philosophical musings aside, Up in Smoke also happens to be just plain hilarious.  The film opens with a famous lengthy sequence where they smoke a giant joint, a scene I found so funny that I wrote an almost word for word Lord of the Rings fan-fiction homage on this very web site.  Cheech and Chong were clever guys, and they pulled out all their best jokes from their stand up routines for this film.  Stacy Keach, as the constantly urinated on Sergeant Stedanko, is an excellent foil, nearly stealing the show in every one of his scenes, whether he’s chastising a subordinate who is even dumber than he is for shooting out the tire of his own police car, or gleefully telling a carload of nuns what is the only kind of meat a priest would eat on Friday.

This is another important point, Cheech and Chong do some dumb shit, but so does everyone else in their world, especially the cops.  In the land of idiots, the stoned man is king.  Cheech is a misogynistic serial philanderer, and Chong is a suspiciously mean spirited burnout, but there is something lovable about the two anyway.  Just listen to them talk about their band (that plays EVERYTHING, from El Chicano to Santana) and how big they are going to be even though only a pot fueled miracle is enough to save them at the big battle of the bands.  They take every calamity in stride, and, honestly, are surprisingly strong role models as they bravely shake off each and every disaster that rips through their path.  Hell, just think about the image of two stoners, wishing they were able to score some pot, and yet they are actually unwittingly driving a van made entirely out of pot.  If that’s not one of the greatest and most optimistic images in the history of cinema, the Howdy Doody doesn’t have wooden balls.