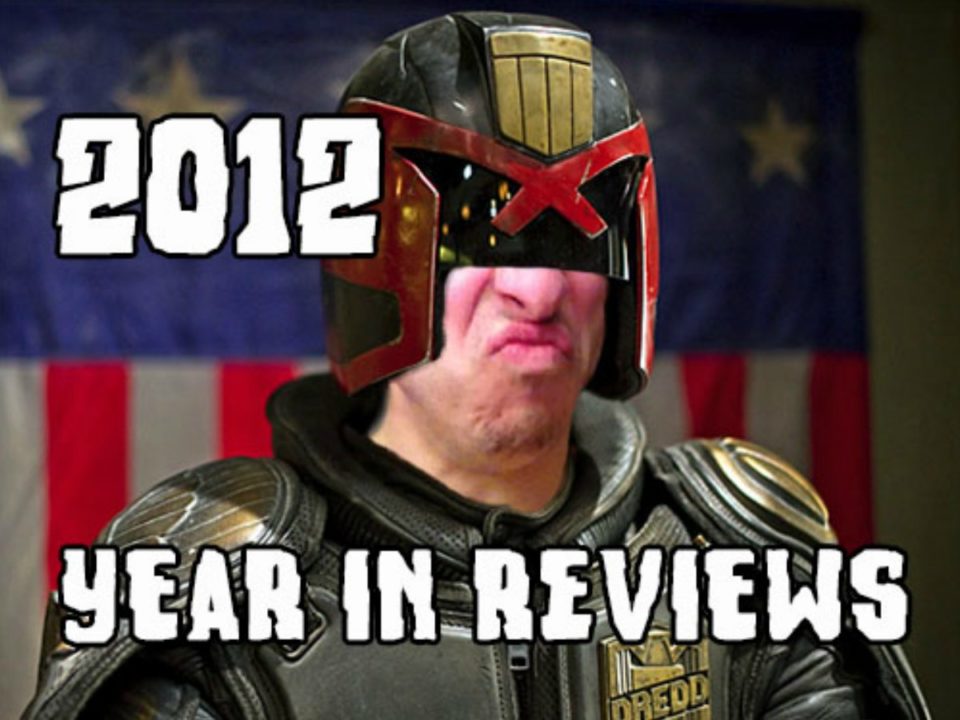 Sadly, down by 66 movies from last year’s already low total.  I can’t really blame film school at this point since I haven’t exactly been busy in 2012.  Probably just all the TV I’ve been watching, like they say in Five Easy Pieces, “There’s a lot of good stuff on the TV!”  My percentage of new movies watched was only 64% (another 7% fall from last year!)  Anyway, once again, I went ahead and made this handy bar graph to see what my most watched decades were: 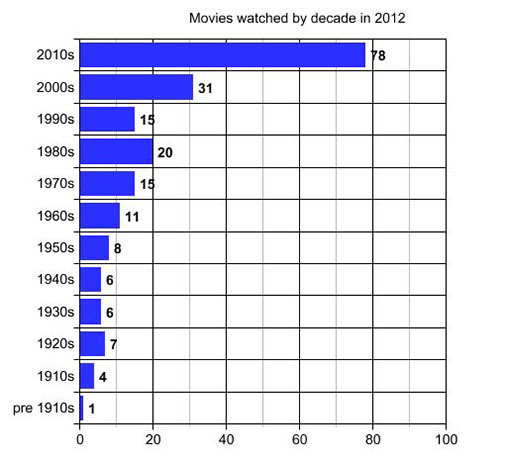 Once again, I ended up watching far more films from the last decade than I would have thought.  In fact, 39% of all the films I watched were from the last 3 years!  I wanted to blame such a low turnout of classic movies on the fact that I’ve already seen all the good ones, but according to the above stats, I actually rewatched more movies this year than last year, so all I can say is I’ll have to step it up next year.  I guess these numbers shouldn’t be hard to beat at least!

Finally, here is my list of the best (and worst) films I saw this year.  In theory the films on the Masterpieces of the Year list are all movies that I find to be nearly perfect.  Of course, my standards for “perfect” seem to change month to month and plenty of other superlative films got left off of it due to my capricious whims at the time I picked the “Monthly Masterpieces.”   The Worst Movies of the Year list is full of those chosen few films that I found almost no redeeming value in.  Again, it’s pretty subjective, and there are plenty of films that I am embarrassed to admit I could not bring myself to put on the “worst” list (yes, even Showgirls ended up having some redeeming qualities–quite a few surprisingly).

It’s a Wonderful Life, Destry Rides Again, Full Moon in Paris, The Seventh Seal, It Happened One Night, Broken Blossoms, Happy Together, Halloween, Love Me Tonight, To Have and Have Not, Dazed and Confused, His Girl Friday, Pandora’s Box, Ordet, Pickpocket, By the Law, A Tale of Winter

So with all these stats you’ve been keeping track of, I wonder if you’ve been counting your abs? How many times have you done all 5 sets in 2012?

Lol, without you there to count me, there’s no way to know! Though, considering I almost pulled an ab muscle making that face for the picture, I suspect not quite as many as bottles of scotch finished.

That face is hilarious. HILARIOUS.

I don’t think it’s fair to count The Room as one of the worst movies of the year. Not…so much because it’s SO bad it shouldn’t even count, or because it’s like the BEST worst movie ever made, but more like because it’s…fucking awesome? And you’re insane if you disagree?

Depending on the company, I’ll admit, The Room can be a fun movie to watch. But that said, if I had to watch it by myself, I suspect the gimmick would wear thin pretty quickly. But maybe I’m just insane!

Especially considering that was my best attempt at Eomer’s epic scowl in Dredd 3d.