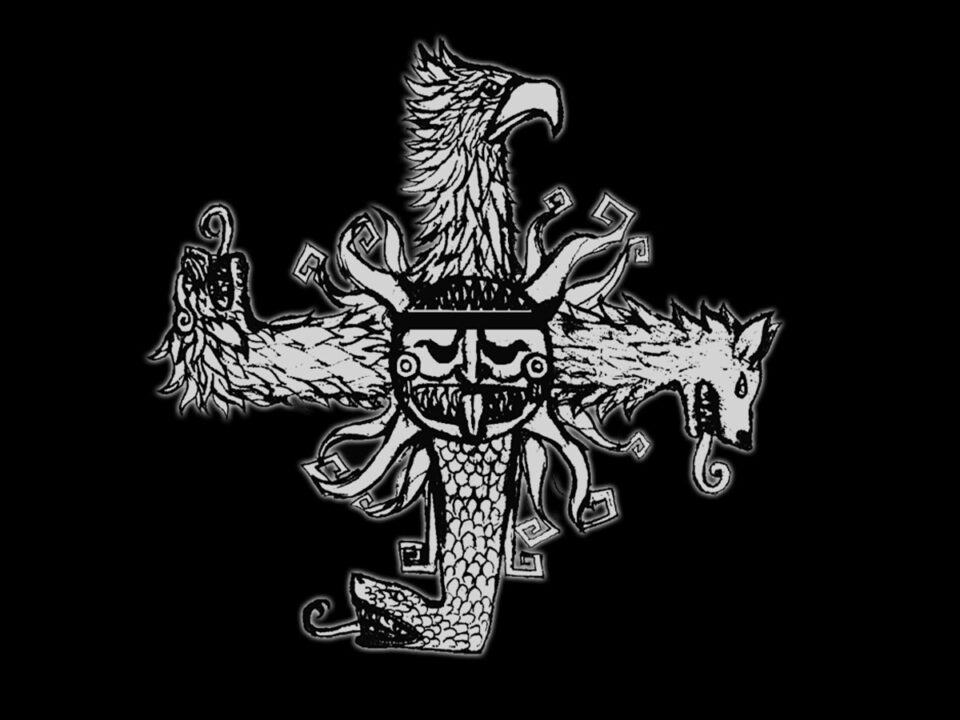 I’ve taken a closer look at the various ways the neo-Nazi black metal underground hides in plain sight before. For every band that has the word “aryan” in their name and a swastika in their logo, there are 20 others that hide their fascist tendencies behind a multilayered defense network of dog-whistles, wolf-symbology, cultural “celebration”, and religious intolerance directed disproportionately at Jews and/or Muslims. Today I’ll be taking a closer look at perhaps the most active NSBM underground in North America (or, at least, it is tied with Quebec), Mexico’s thriving indigenous NSBM scene. Before starting, it is important to note that this post is not a discussion of Mexico’s indigenous population as a whole, but rather is about a very small number of hyper-radicalized individuals within Mexico’s already ultra-niche extreme metal underground.

Fascist imagery in Latin America is nothing new–as far back as 1987, Brazil’s Holocausto dropped their legendary debut album with this doozy of a cover:

Though, while the band leaned HEAVILY on the Nazi imagery here, it appeared to be mostly a Slayer-esque provocation rather than any kind of specific ideological directive from the band members. Even Latin America’s most famous metal band Sepultura had very brief early “edgelord swastika period”:

Not that you should let Sepultura and Holocausto’s naivete make you think Latin America is relatively free from “real” NSBM. There are (as there are everywhere else in the world) a large number of explicitly NS bands in Latin America–like Brazil’s Evil, Command, Seges Findere, Nachtkult, the entire Argentine Southern Elite Circle collective, and many more. However, Mexico is the current undisputed epicenter of the NWoINSBM movement. Considering Hitler’s thoughts about skin/eye color, “Indigenous neo-Nazis” seems like a strange combination, but when viewed against Mexico’s problematic treatment of their native populations, affinities do start to arise.

To start, it will be helpful to understand the general treatment of indigenous populations in Mexico (based on my rudimentary understanding of a very complex issue). Unlike the United States and Canada’s “Blood Quantum” policy of setting strict racialized “blood percent” limits on what counts as “Native” (a policy rife with its own issues–most notably in that, over time, it is has the end goal of “erasing” all indigenous peoples–along with the last of their lands/rights), Mexico is a country with a majority Mestizo population, so their approach has been different. Mexico has established a process of assimilation (or cultural erasure depending on how you see it) called “mestizaje” designed to establish a national mixed race cultural identity that abandons the vast majority of specific tribal cultural practices. Thus, in Mexico, identification as “indigenous” as opposed to “mestizo” is largely a question of choice of cultural practices rather than a question of bloodlines.

With this distinction in mind, the eugenic policies of the Third Reich would seem to apply themselves to the American/Canadian model of quantifying blood percentages. And, to be sure, native purists north of the border have been known to adopt NSBM ideology within their music–this is especially prevalent in the Quebequois scene, as sentiments like this (from Infernach’s Finnian Patraic) are common:

In my culture, the natives were strong people, fast hunters, we kinda lost our path. My hate comes from there, now we’re just rejects from the system, looking good buying things and feeding this whole monster that mixes everybody into the same mold; working, paying. I never said my color was better than another one. But my color has vanished (the red skins). People these days are putting tags everywhere like you say something, automatically you’re this, you’re that. Like just because I fight for the nativity of my land, automatically I am against black people. I truly believe that with the school system, social mentality and internet going on with their stupid trends, all hope is lost for native culture revival, so why let all these newcomers in?

Granted, Patraic’s ultra-simplistic view reeks more of edgelord than any kind of codified overarching ideology for indigenous black metal musicians, but the ideas of “we are losing our people and our culture” is both a sad fact and at the same time only one adjective removed from the infamous “14 words” white supremacists love to spout.

On the other hand, the focus on loss of cultural practices in the mestizaje model is a much more accessible framework on which to rest National Socialist symbols and ideologies. Once the focus shifts from “we gotta keep the bloodlines pure!” (bad!) to “we can’t lose our culture in this modern world!” (good?) you have your foothold to pull in the black metal fans who normally wouldn’t go anywhere near the NSBM underground.

This is all based on some cursory internet research from an outsider, and I’m sure there’s plenty of talk about bloodlines in the Mexican NSBM scene as well. However, the most striking thing to me when I look at the output of indigenous NSBM bands from Mexico is how quickly they cross over into “well, this, ideologically speaking…seems fine?” And as you may know from my previous posts, my bar for “seems fine” is pretty high as I call everything NSBM.

Take, for example Xibalba, one of Mexico’s earliest (and best) black metal bands. As near as I can tell, there has never been even a flirtation with fascist imagery when it comes to Xibalba. And unlike their contemporaries Auzhia (who sound quite Nordic in comparison), Xibalba are wholly devoted to their own indigenous culture in their sound, lyrical content, and overall presentation:

What I’m trying to say is that a band like Xibalba sets off no alarm bells for anyone.

A band like Tlateotocani (signed to the central “Organización Nacional Socialista Paganaon” [O.N.S.P.] record label) the other hand…

Leaves nothing to the imagination. And, no matter what your “cultural” intentions are, splashing Hitler across the cover of your album just makes you an edgelord asshole. From here though, things get a little less clear-cut like this album from Maquahuitl:

After they dropped the native styled swastika from their album art for this release, about the only thing identifying this as NSBM is the usual dogwhistle buzz words like “blood” and “might”.

Finally you have bands like Chicago’s Pan Amerikan Native Front, who, from what I have seen, don’t seem to have any explicit NSBM dog whistles and are instead an earnest exploration of Native American culture in the great lakes region:

But…they also have a split album with Infernach, the dude from above who likes to conflate European colonialism with modern day immigration to further his own racist ideologies.

Thus, unlike the “New Wave of Anti-Islamic Black Metal“, the current indigenous scene is not formed purely out of a desire to advance racist ideology. Rather, because so many of their own goals (longing for the “old way”, preservation of a dying culture, creating something culturally significant) align with the borderline sketch black metal scene (basically all the dude-bros who claim they are just “really into Vikings”), Mexico’s indigenous black metal scene was fertile ground for a right-wing infestation.

Much of the music is quite unique and good (even if it does overuse flute accompaniment a bit) while the album art and presentation feel like a breath of fresh air in the land of grim black and white corpse paint photos–so to paint the entire scene as “just NSBM” is doing it a disservice. Is the band signed to O.N.S.P., E.A.N.M (or any Mexican label with “Nacionalista” as one of its letters)? Best case, a lot of their best friends are NS. Do they overuse the word blood in a non-sanguineous way? Same. Are they simply a band of indigenous people just trying to make some fucking black metal out here without a bunch of assholes online calling them Nazis? Who knows, but, as always, don’t let a simple “not a political band” statement hide the truth.

This is a great site; a lot to dive into. The depth of your black metal knowledge is astonishing.