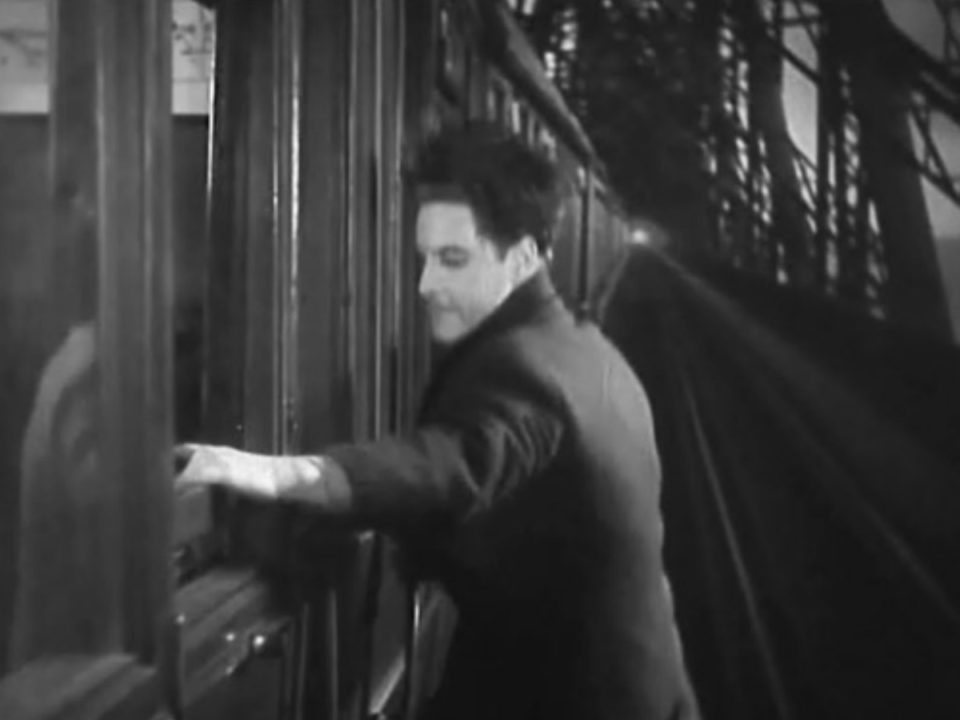 Nobody loves Hitchcock as much as pretentious film snobs.  I’m a year and a half into graduate school in film and media studies, and you would not believe the amount of Hitchcock bullshit that gets blown up my ass in about 90% of my readings.  Not that I’m knocking the guy of course, Hitch deserves all the praise he gets.  But too often I feel his British work gets slighted in favor of his American work from Rebecca onward.  Which is totally unfair, because his British work is totally sweet.  Well, ok, maybe not Waltzes from Vienna, but today’s movie, The 39 Steps, is undeniably brilliant.  It might not be as susceptible to a Lacanian psychoanalytic theory reading as Vertigo, but hey, is that really a bad thing?

Hitchcock reused many of the same themes throughout his career, and one of my favorites (along with “solving a murder on a train”) is the “wrong man” who goes on a wild adventure as he is chased across the country while attempting to clear his name.  The 39 Steps is a great early example of this story, that, in my opinion, is just as good as North by Northwest (the most famous late period example).

The set-up may be a little implausible (a hot spy chick asks a random stranger for help, and then ends up stabbed in the back by rival spies in his apartment–which he gets framed for–forcing him to figure out what is going on himself) but that’s just the way these films go.  And once the adventure gets started, it doesn’t let up.  The 39 Steps jumps from set piece to set piece with so skillfully that the viewer is instantly sucked in.  It’s classic cinematic storytelling at its finest.  Everything from the farmer’s wife to an accidental speech at a political rally is seamlessly woven into the freight train narrative.

Of course, this isn’t to say that The 39 Steps is completely without a deeper subtext.  No great film is simply a collection of set pieces.  And at the same time, a collection of supremely entertaining set pieces should by no means bar a movie from masterpiece status.

But what distinguishes The 39 Steps from something like Bad Boys 2?  I mean, it would take a pretty astonishing lack of film snobbery to claim that nothing distinguished a Hitchcock masterpiece from a Michael Bay hack job.  The 39 Steps is honestly the superior film.  So, what, do they just not make ’em like they used to?

I think they key here is that The 39 Steps is not just a sequence of set pieces despite feeling like it is (which, again, makes for a supremely enjoyable movie).  Rather, The 39 Steps shows just how resonant the “wrong man” formula is.  The viewer doesn’t wait to see what action scene will come next, they wait (on the edge of their seats I might add) to see what action scene will happen to the main character next.  It might seem like an obvious explanation (shockingly, movies that get you to invest in their characters are more compelling), but it is too often forgotten in today’s action films.

The 39 Steps is nothing less than a ripping good yarn that utilizes its rich premise to the utmost.  And, honestly, it really is too bad they don’t make ’em like this anymore.