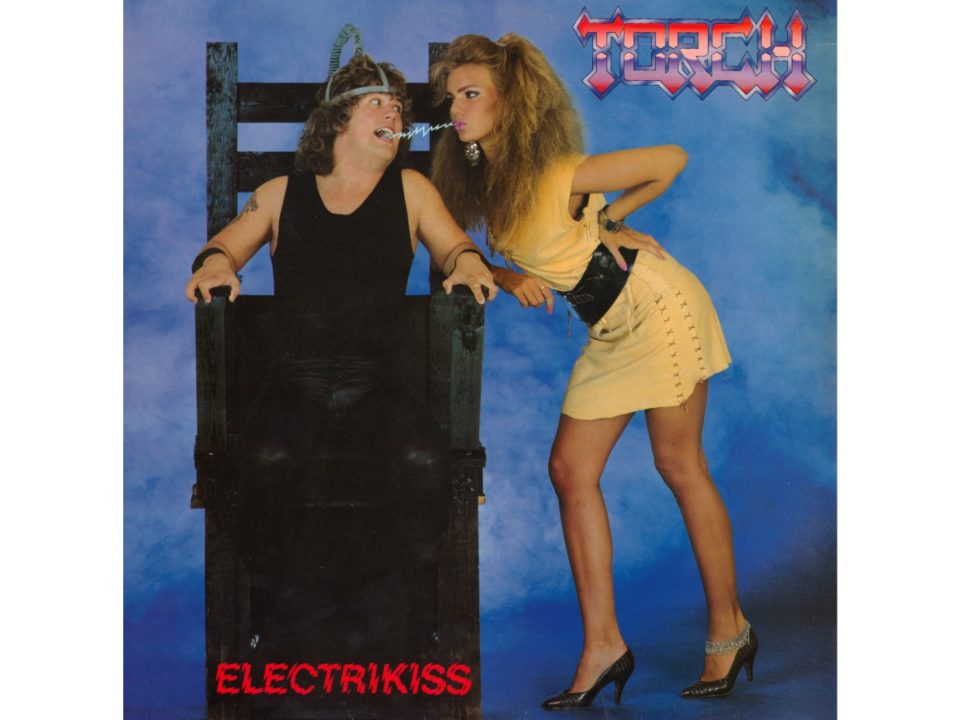 Today, we take a look at Torch’s second album, Electrikiss.

Torch was a Swedish band from the early 80s that kind of sounded like a mash-up of the most mediocre parts of Judas Priest and Accept.  And, for better or worse, Torch is a band that is largely remembered to this day for this album cover alone.  To be fair, their music was better than just a mediocre Accept/Priest clone, their big issue was that they were just bound to suffer in comparison.  However, what is undeniable is that this cover is one of metal’s silliest moments–no small feat in a genre full of silly moments.  Here it is again, in all its high quality glory: 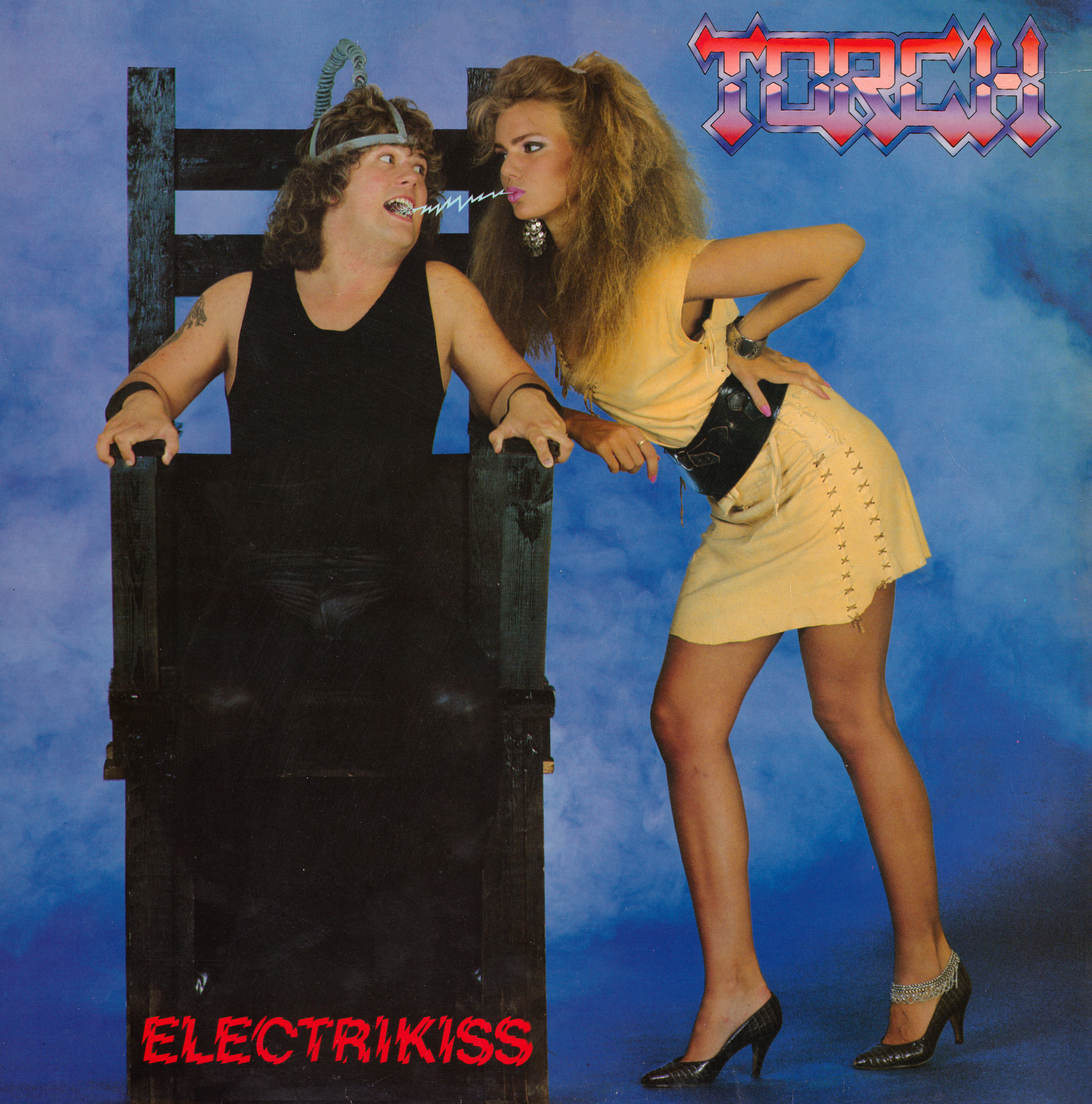 Also, the singer is a short man already, putting him in a giant high chair with his feet dangling over the floor while a giant woman bends down to kiss him does his stature no favors.  And, I know this is pre Top Model era here, but I do believe he “lost his neck” in that photo.

As for the titular “electrikiss,” I know this was a pre-photoshop time, so I guess this really was the best they could do: 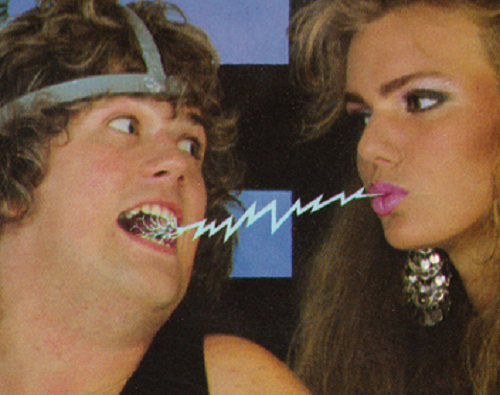 It’s too bad too, photoshop might have come in handing removing those totally non-metal wedding bands from their hands!

What’s on the Back?

The back of the album really isn’t too bad… a pretty sweet live pic, and a silly, but solid, band pic–all in all, above average for the back of a metal album: 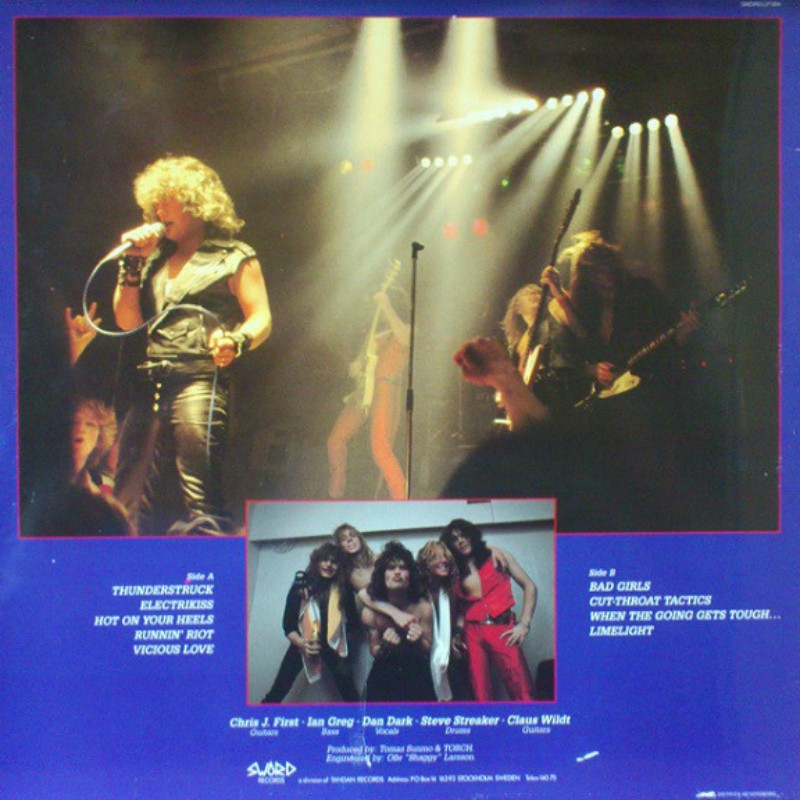 I do wonder about their names though:

What do you think the over/under is on how many of these are their real names…I’m honestly not sure!

Let’s get a better shot of that band picture, which, really does capture a nice “young and wild” backstage energy that is so representative of this period of metal: 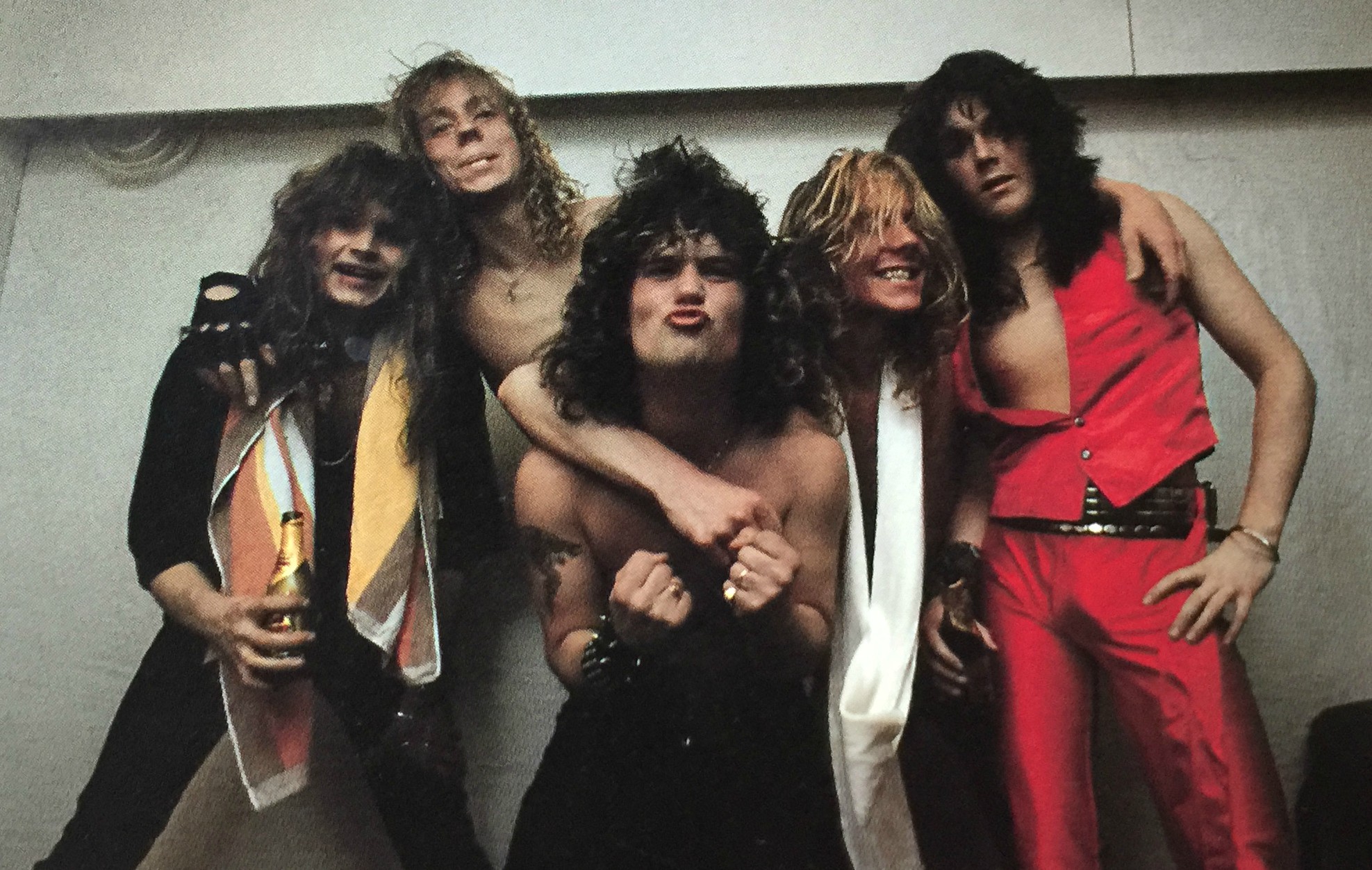 Just a couple bros having a good time, even if there was some confusion as to where the camera was and the guy in red wasn’t quite ready for the photo.  I don’t mean his distracted face, I mean, he did not adequately chub up for the requisite metal “through the pants cock shot”: 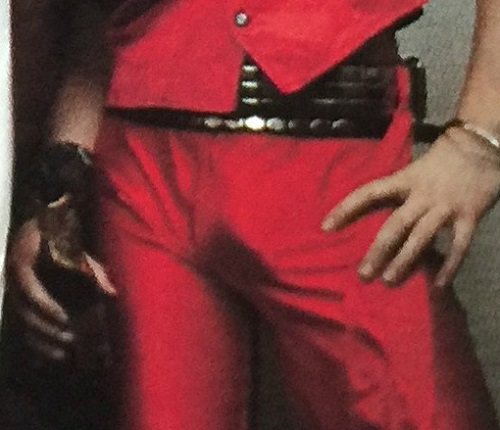 Every metal band picture ever has some dude in tight pants showing his cock, and it is an unwritten rule of metal that in such cock shots, the dong must at least reach mid-thigh.  It doesn’t matter if it’s real,  you just do what you have to do, as there are few genres of music more obsessed with cocks than heavy metal.

Anyway, cock quibbles aside, great photo overall–singer’s duck face was on point, and apparently even Ozzy Osborne snuck in there with a beer.

The live picture is pretty great too: 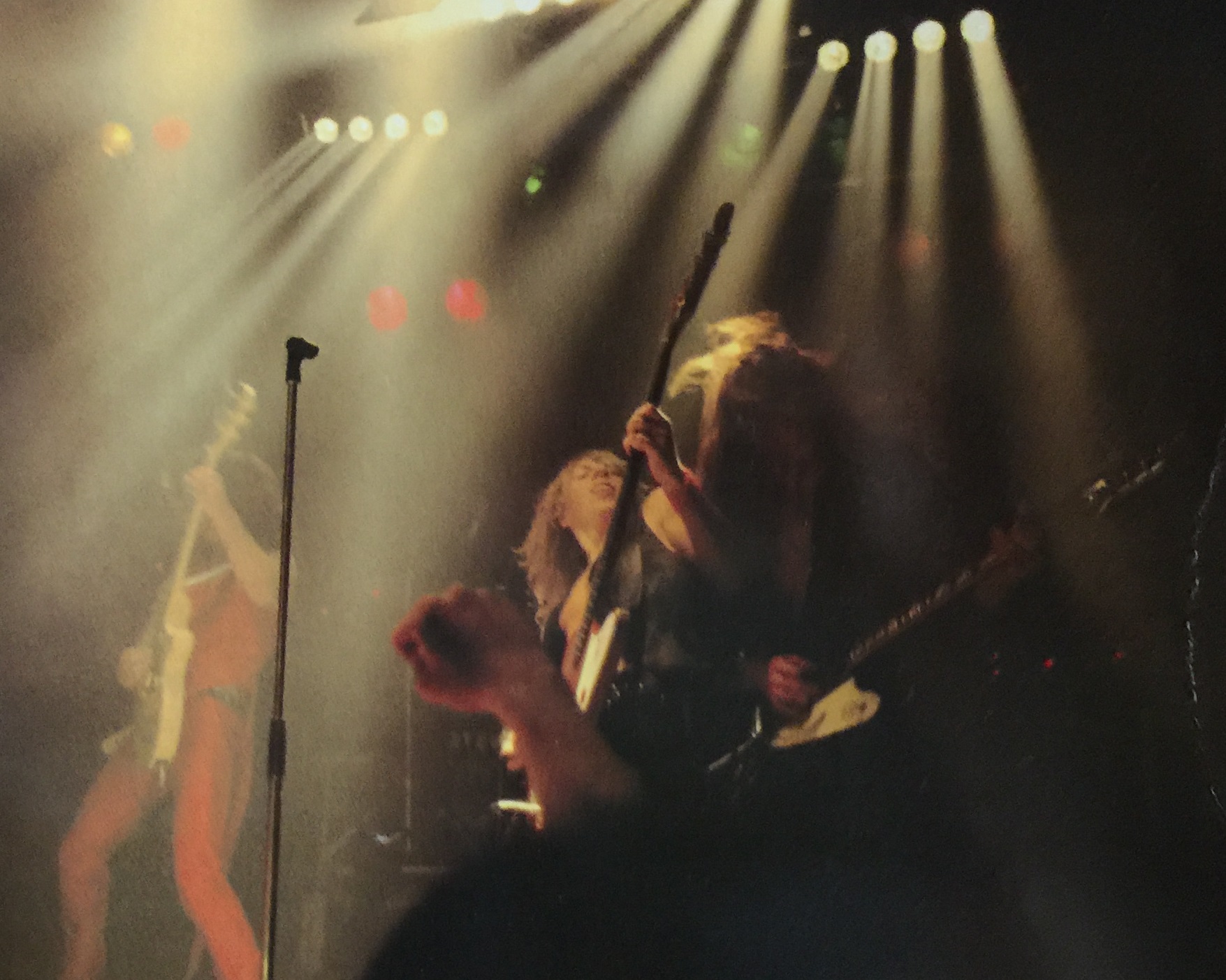 Though, like their music, the perfect Renaissance painting style mathematical symmetry of their guitar necks fell a little short of the true masters of live band shots: 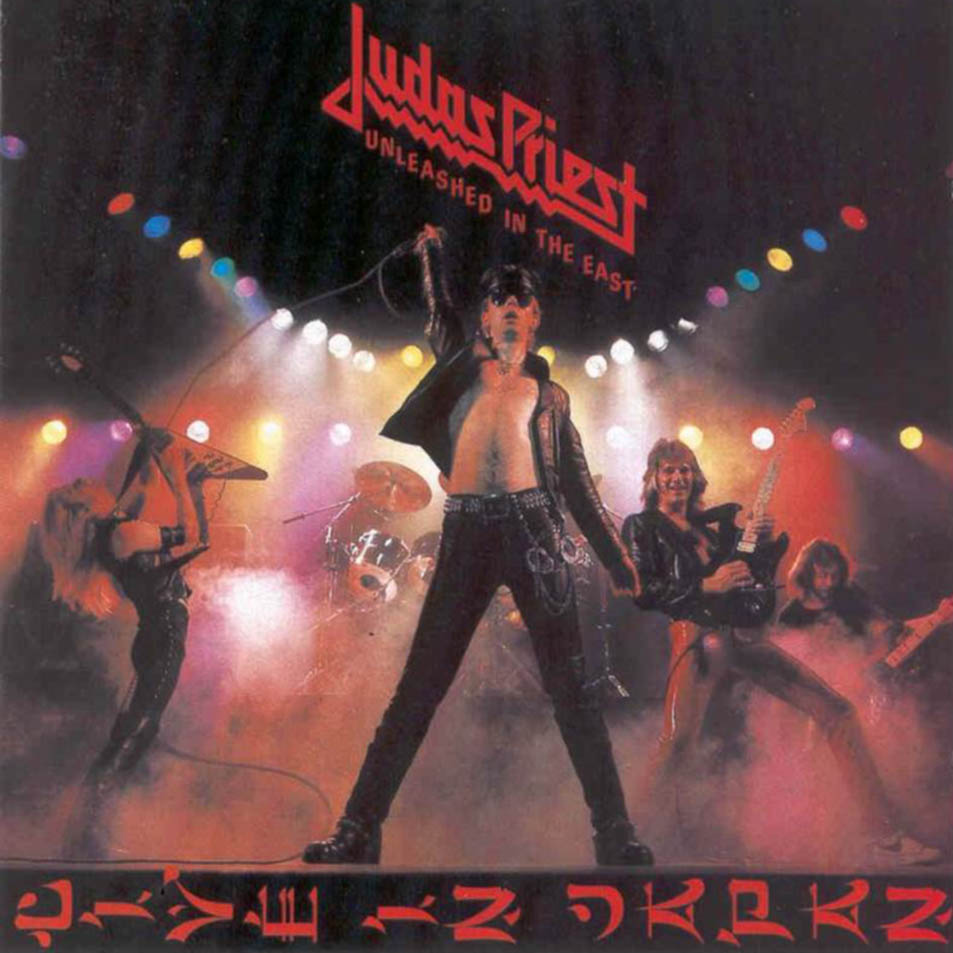 Of course, Priest staged theirs, so maybe Torch should get more props for almost matching it in an actual live setting!

Also evident in the live picture is a False in the audience that doesn’t know how to throw up the fucking horns:

She seems to be almost ready to commit to the proper “thumbs in,” but close doesn’t cut it comes to tight pants cock shots and throwing up the horns.

Wait, that’s not all…

It’s always a delight when a band doubles down on the silliness for the record sleeve, and Torch has a good one inside: 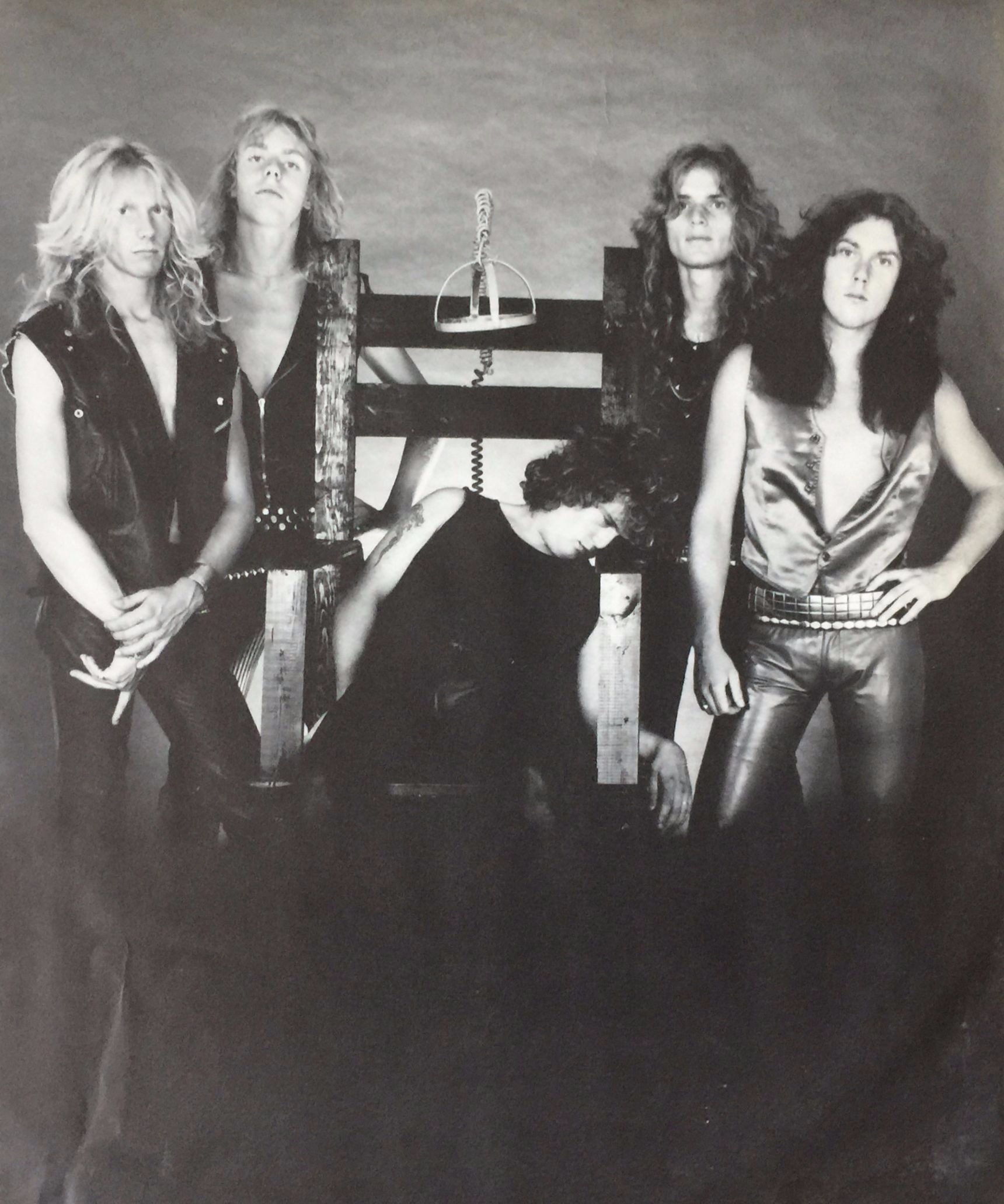 The tragic aftermath of the electrikiss is now made clear in this harrowing image portraying the devastating consequences of electrikissing.  Though it still isn’t doing their diminutive singer any favors.

The other side has a giant ad for their fan club: 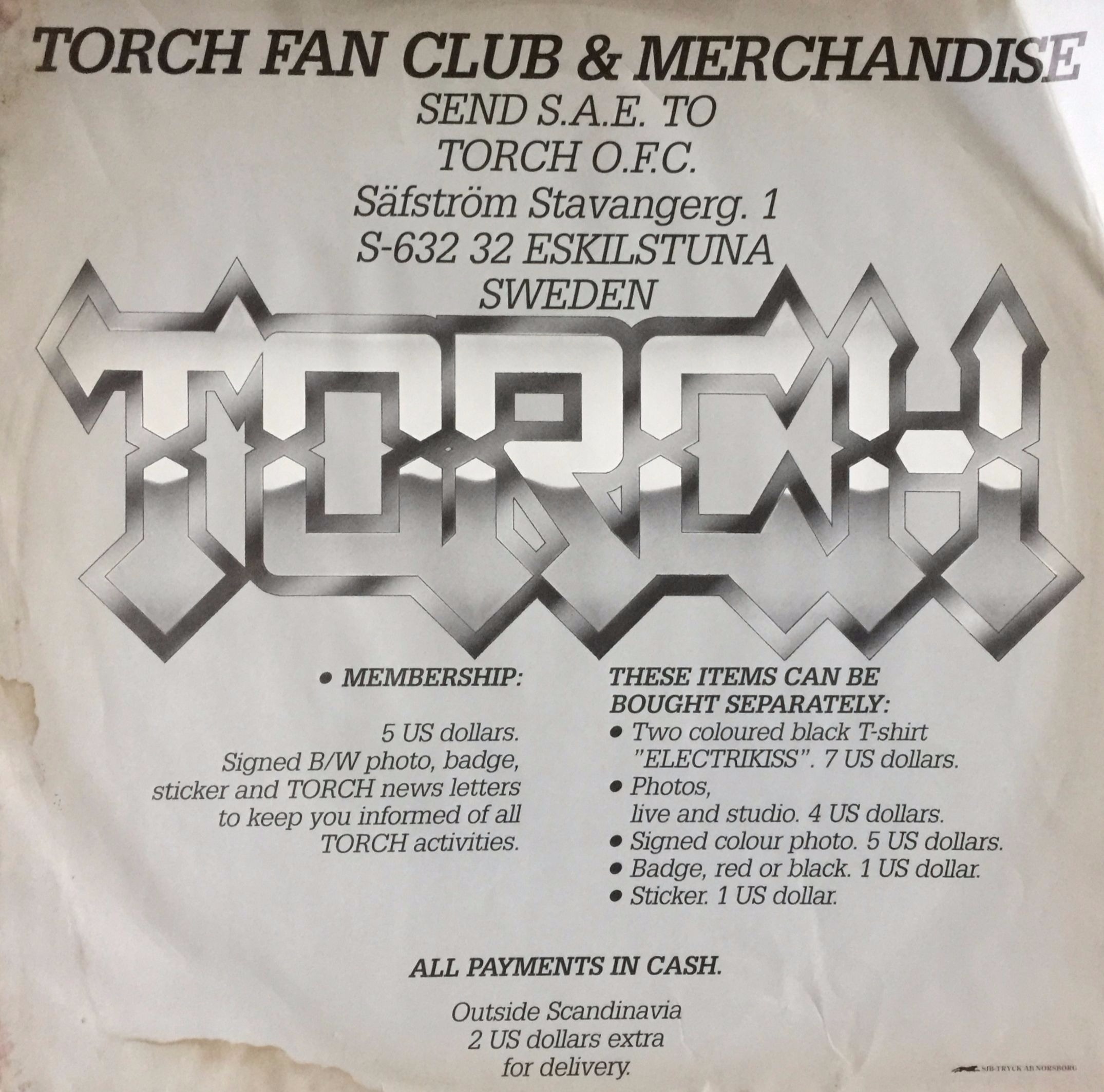 You know, in case you just had to have a shirt with this album cover on it.

Honestly, not really!  I mean, it’s a step down from their equally impressively covered first album, but Torch produces some reasonably listenable metal.  Songs like “Thunderstruck” are honestly quite enjoyable Priest worship:

Though most of the album is worshiping the wrong kind of Priest:

Or shamelessly trying to create their own “Balls to the Wall”:

Still, musically speaking, Torch ain’t bad.  The cover of this album however, that’s another story.