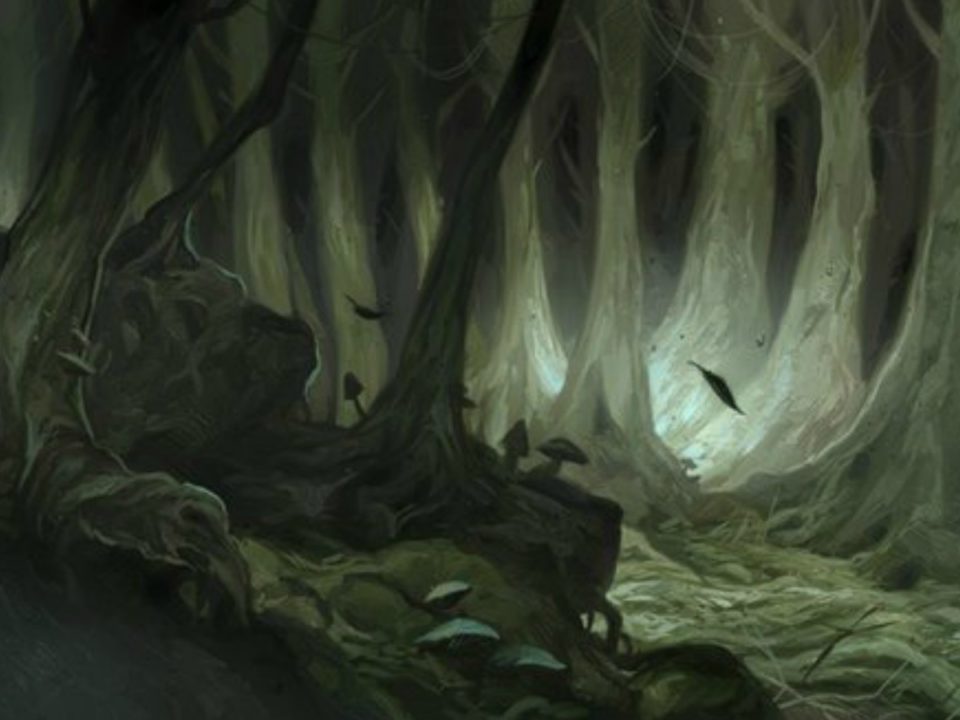 This is another entry in my fairy tale series. Each entry attempts to analyze one archetypal element of myths legends and fairy tales in a short introductory essay followed by an original fairy tale utilizing some of the elements that have just been discussed. This time we’ll be talking about getting lost in the woods!

The Forest as Labyrinth

The deep forest is one of the most fundamental elements of myths, legends and fairy tales. Beneath the cloaking overhead canopy all manor of things good and evil await the central character of every archetypical tale. The path to uncover such secrets is not always clear however, for the wooded stands of the forest serve to lure the central character to their dangers as well as hide such things from the world at large. In this sense, the forest has often served as a labyrinth that leads the protagonist to the secrets that lie at its center.

The famous Labyrinth of Crete, which housed a fearsome Minotaur at its heart, is the most familiar archetypal labyrinth. Is this so different from the forest of Hansel and Gretel hiding its witch’s candy house at its center? Or even that oldest of stories, The Epic of Gilgamesh, where the cedar forest of the Gods houses the fearsome monster Humbaba. The trees of the archetypal forest conceal within their hearts the mythical realm of adventure to which all heroes, reluctant or not, must travel in their journeys.

The forest itself is the means for hiding its secrets. Only the worthy will unlock the forest’s secrets; often only with quick thinking or outside help. Hansel’s pebble trail that guides him and his sister home by moonlight serves the same purpose as Theseus’ ball of string that guides him out of the Minotaur’s labyrinth. Yet without their pebble trail, Hansel and Gretel are forced to defeat the monstrous witch at the center of the labyrinth before the forest becomes just a forest and they are allowed to return home.

Forest in myths legends and fairy tales are an important bridge between the magical and mundane. Even in the real world, forests are mysterious places; who can say what secrets lurk beneath the branches of a deep dark forest. Only the bravest dare wander their twisting corridors, the rest of us stay at home for fear of being lost in the woods.

Once, at the edge of a great dark forest, there lived an apprentice woodcutter named Ivan and his master. Ivan was a young boy, no more than seven years of age, and he had only one friend in the world, a great black raven.

Ivan’s lot was a sad one. The woodcutter was a cruel man who made poor Ivan toil ceaselessly, only allowing him to stop for one small meal of millet and roots each day. Every night, as he lay in his pile of straw in the corner, he would wish that he might never see the woodcutter again.

One winter morning, which dawned dark and forlorn without even a sliver of the sun lighting the world, Ivan woke to find his raven holding a shining golden coin in his black beak. Ivan took the coin from the raven and stared at it in wonder. Suddenly, the woodcutter’s great voice bellowed from behind him, “Where did you get that coin?”

Not daring to meet the woodcutter’s sawdust flecked gaze, Ivan stammered that his raven must have found it in the woods. The woodcutter, whose countenance reflected the soft yellow gleam of the coin, spoke excitedly, “where the wood worm burrows, the roots will rot, there is more than this one coin in these woods and your raven shall show me where the rest are!”

With that, the woodcutter lunged at the raven, but the black bird was far two swift for Ivan’s lumbering master. Darting through the rotten planks at the far end of the cabin, the raven took to the sky and rose toward the scarred trees at the forest’s edge. Grabbing Ivan roughly by the arm, the woodcutter burst out of the cabin in close pursuit.

The raven flew lazily over the trees, occasionally letting out a low caw which allowed Ivan and the woodcutter to follow without considerable trouble. At times the raven even seemed to be waiting for Ivan and his master. Yet always his guiding calls took them farther into the thick of the forest.

The hours passed and the day seemed to grow even darker. Ivan could not tell if it was because of the low dark clouds or the forest itself. They were long past the familiar groves that surrounded their cabin, and as the woodcutter dragged Ivan deeper into the forest the trees seemed larger; with hanging moss that almost touched the twisted undergrowth that had sprung up around them. These trees had never felt the bite of the woodcutter’s axe, and it seemed to Ivan as though it was a part of the forest that woodcutters were not welcome in.

As they journeyed through the dark heart of the forest each root seemed to twist itself about their feet and each hanging vine seemed to find its way across their path. Ivan, who was still a small boy, was able to pick his way through the dense undergrowth, but the woodcutter seemed to entangle himself further with each step he took. Enraged he swung his axe again and again into the burgeoning underwood. But it was no use; he soon found himself stuck fast while the cries of Ivan’s raven faded into the distance.

Frantically the woodcutter bellowed at Ivan, “follow your bird boy, don’t let it get away! I’ll soon be freed from these trees!” With a brutal shove, the woodcutter threw Ivan through a great mass of gnarled briar that stood between them and the ebbing caws of the raven. Ivan fled before the woodcutter’s fury until the muffled curses and low thud of the axe had disappeared into the darkness between the trees.

Looking around him, Ivan had no idea where he was. Here in the deepest part of the forest the old trees vanished in the blackness above him. The day had gone, leaving only the numbing chill of the midwinter night.

Lost, cold and without hope Ivan sat down on a fallen tree, thick with mold, sobbing in despair. Then, just above the canopy, came the familiar caw of his raven. As the crow’s voice moved over the trees, Ivan leapt to his feet and followed it. The binding underwood seemed less thick as Ivan made his way through the branches, following the familiar voice of his raven. On through the night Ivan walked as the raven led him through the twisted forest passages. At last he could go no further and lay down upon a soft bed of moss into a deep sleep.

Ivan woke with the sun orange upon his face. There was a warmth to the light that melted away the miseries of his long night. As Ivan peered through the trees he gasped. He was at the forest’s edge and the familiar sight of the woodcutter’s cabin was directly in front of him. Upon the thatched roof perched Ivan’s raven, cawing happily at his young friend. His ordeal over, Ivan soon had a warm fire burning under a great pot of rich quinoa porridge.

As the days went by and winter faded into spring, Ivan’s master never did return from the forest. No longer trapped beneath the yoke of the woodcutter’s axe, both Ivan and the forest grew with the vigor of all happy things. As the years went by Ivan’s raven would wake him each morning with a new golden coin clutched in his beak.