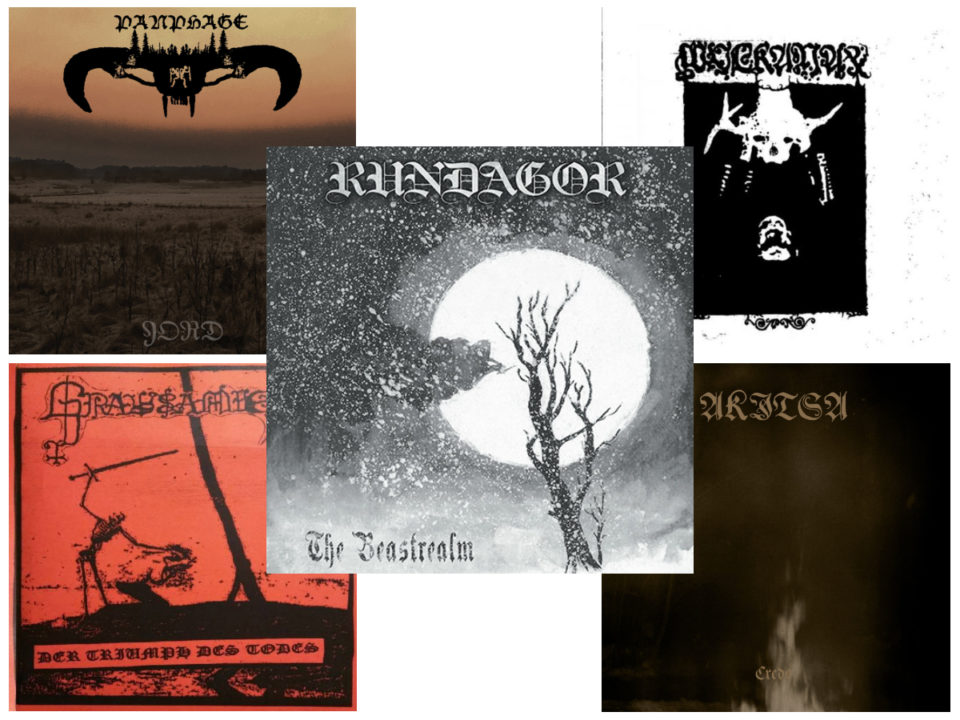 Looking over the past few years of these “best of” posts, I’ve noticed that after my top 5, I usually end up with more and more reservations about the albums I call the “best” of the year. There are plenty of great albums released each year that are worth listening to, but the ones I really want to rave about much harder to find. Thus, I’ve cut my list back to just 5 albums, with an expanded “honorable mention” section to try to get a more focused, high-quality “best of” list (and, just maybe, avoid having to post some of the more reprehensible album covers).

Again, there are far more than 5 worthy albums each year, so I’ve greatly expanded my “honorable mention” section (and included it in the yearly playlist) to shine a little light on the near misses (and the flaws that kept them off the main list).

This year, in a first, my list is entirely black metal. It’s no secret black metal has been played out for decades now, but the current underground still manages to come up with fresh, interesting takes on the genre, either in entirely new ways (Wulkanaz, Akitsa), or by somehow making the old sound new again (Panphage). It also helped this year that two classic bands (Grausamkeit, Rundagor) released “lost” albums from black metal’s glory days–a bit of a cheat to include old-school ringers on a 2018 list, perhaps, but they are brilliant albums nonetheless.

I really didn’t find much “NWO[traditional]HM” that caught my ear this year…plenty of listenable stuff, but none that made me anxious to listen again. Traditional Heavy Metal will be back with that Traveler album next year for sure though. As for death metal, I really didn’t delve into the underground too deeply (though I will say the new Necros Christos was a huge disappointment). I’m sure there are worthy albums out there I missed, but probably not much that would dethrone any of my favorite black metal. What can I say, I’m just a sucker for simple, forlorn melodies, played sloppily.

Anyway, here are my top 5 (and the next 10, plus 10 more to grow on) metal albums of the year–if you listen only to underground bands that sound like shit. As with the previous years, almost the entire list would probably vote for Brexit, but, as I’ve said before, I cut my black metal teeth on Burzum, Darkthrone, and Graveland in the 90s, and, unfortunately, the bands emulating that style, don’t usually just stop at the music. So, steer clear if you are the kind of person that won’t watch Woody Allen movies anymore, but, if you can separate the brilliance of Manhattan from the pedophile that made it–and like music that sounds like it was recorded inside a running dryer full of angry cats, boy do I have a list for you!

Akitsa has been making quality music for the past 20 years, and is always worth listening to. Their penchant for extreme minimalism can sometimes make their songs feel more like a half formed thoughts than full on black metal masterpieces (I thought their last album especially was a little underwhelming), but with Credo they balance the formula just right!

This is an album full of varied, thoughtfully composed epics–no mean feat considering their minimalist style. Honestly, compared to the rest of Akitsa’s catalog, Credo is positively “accessible”!

Just check out the opener, “Siecle Pastoral” to get an idea of Akitsa’s punky charm. Sure, 10 minutes is a long fucking time to listen to 3 riffs, and sure, the middle section sounds like it was lifted from Filosofem, but for those with a bit of patience, Credo is incredible:

There is a slight unfinished/rushed quality to his songs that tends to keep him from the highest places on these year end lists, but there’s no denying both his importance in the modern black metal underground and the creativity of his music.

This song, “Skymmeng,” is a good example of Wulkanaz’s start/stop blasting folk/punk. The addition of a competent session drummer (the Craft guy no less!) adds a welcome bit of rhythmic complexity as well:

Panphage is a name that has been thrown around the underground so much the last 5 years that I just kind of assumed they were some kind of Swedish modern death metal outfit that wouldn’t be my thing. Come to find out, they are actually folky sounding black metal that is absolutely better than anything else out there today (seriously, now I have to go back and add their earlier albums to my old best of lists!)

30 seconds into Jord, and I was already thinking “oh, this sounds a little clean/slick…not really my thing…” But, once I took another 30 seconds to get past my hangups about all new black metal needing to sound like Wulkanaz, I realized that Panphage was putting out some fantastically composed traditional black metal, of the brand I didn’t think anyone that isn’t called Satanic Warmaster even made anymore.

Jord has riffs for days, and the compositions are constructed perfectly, evoking all manner of epic imagery in your mind as the effortless melodies flow from the beginning of the album to the end. Take a listen to the opener, Odalmarkerna to get an idea of the kind of well done black metal that can still catch my ear, even in 2018:

Grausamkeit is one of my all time favorite bands, so lost B.S.o.D. material was automatically going into my top spot on any modern best of list. True, this material was recorded at the same time as the amazing Nostalgia – Okkultes Blut album, and most of these songs just sound like early versions of the final (markedly superior) tracks on that album. However, someone as prolific as B.S.o.D. is bound to lean heavily on experimentation and improvisation, and even the songs that are obviously from Nostalgia – Okkultes Blut are so wildly different (in both sound and structure), only the most grizzled Grausamkeit fan would be able to realize it.

It is telling that Grausamkeit’s worst, throwaway material is strong enough to reach the top of this list, but that’s the bizarre outsider genius of B.S.o.D. To some, this might sound like 4th rate Emperor worship that is in no way better than Panphage. To others it’s the pinnacle of true underground black metal. Check out “Track IX” (the closest to a straight up copy of a Nostalgia – Okkultes Blut song–“Freude am Töten”–the one with the amazing whistling) to see where you fall on the Grausamkeit appreciation scale:

Blazebirth Hall was really just like 4 racist Russian dudes living in the same small town, juggling a half dozen black metal projects between them. Impressively, for that inauspicious start, they still managed to create a handful of all-time great mid 90s black metal albums from the basements of their parents homes in Novomoskovsk.

Kaldrad was the undisputed leader of the scene, and cofounder of Forest (one of the pillars of Blazebirth Hall) with Dagorath. Dagorath’s other band was Rundagor–though he only managed to release one (excellent demo) under that name. At some point in the mid 90s, Dagorath realized all his friends were racist dicks (and said as much). Shortly after breaking with Blazebirth Hall, Dagorath disappeared (along with his recordings of the still unreleased Rundagor debut)–which caused the rest of the “Hall” to claim they had murdered him as a race traitor or something. Long story short, rumors of his death were greatly exaggerated, and Dagorath resurfaced 21 years later to finally release the long-awaited first Rundagor album–and holy shit is it fantastic (it is so good it even knocked those Grausamkeit B-sides down a notch on this list).

Kaldrad always got the lion’s share of the credit for the Forest material, but this Rundagor album shows that Dagorath was probably mostly responsible for Forest’s droning, repetitive songs that positively dripped with atmosphere (opinions differ on how good the Forest material is–I happen to love it). Rundagor actually improves on the Forest formula by inserting more folk elements into the mix (as well as spending a bit more time focusing on the riffs over the atmosphere).

Like Akitsa, this one takes some patience, but I was absolutely unprepared for this lost masterpiece from Blazebirth Hall to come blowing into 2018 on some kind of temporally dislocated freezing Russian wind. The album is varied, epic, and still full of the Blazebirth atmosphere. If it feels like people don’t make songs like “Embrace the Vast” any more, it’s because they don’t…if only every year could bring us a lost time capsule from the 90s like 2018 did:

All of these bands passed the “I want to listen to this more than once” test. All of them also missed out on the top five, mostly due to some murky conception of failing to maintain interest for a whole album/feeling uninspired despite sounding great on the surface. Still, check em out, it’s all good stuff!

Like the honorable mentions, these are all good albums, and worth checking out, but they seemed flawed enough that I also doubt I’ll be listening to any of them 10 years from now. Check em out though if you’ve really got nothing better to listen to…

Finally, here is this year’s list (and honorable mentions) in convenient playlist form: