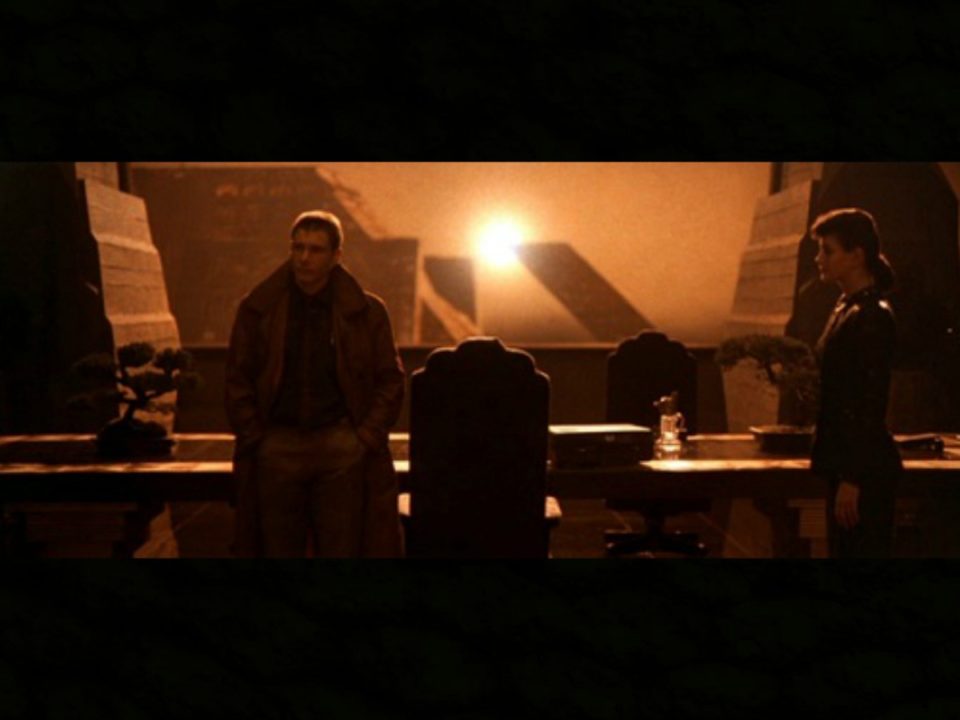 I talk about cyberpunk a lot on this blog.  It is, in fact, one of my favorite things–a thing about which I have thoughts.  Next to the perpetually cloudy winter of Middle-earth, the perpetually orange-tinted pseudo smog-twilight of your typical cyberpunk dystopia is one of my favorite settings.  And no work of art, neither Neuromancer nor Hackers, has done as much to cement the perfect vision of cyber punk as Bladerunner.

Cyberpunk is a strange thing.  An uneasy union of technophilia with a healthy dose of film noir stylistics, it has often been called “high tech and low life.”  And, while I’m a noir fan, the appeal of cyberpunk goes a bit further than its antihero protagonists and chiaroscuro.

I love cyberpunk and Bladerunner so much, that I could practically write this entire post by simply cutting and pasting from previous WiBiL posts.  In fact, to quote my own review of Hackers:

The world of cyberpunk derives much of its mythic power from its pre-Ragnarok temporal position.  It is an old world of fading light, night is just around the corner, and death with it, but it is not here yet.  It is all the more resonant for being our near future rather than our distant future.  Ragnarok is coming, and sooner than we might think.  Perhaps the most powerful image from Blade Runner is the simple shot of the setting sun from within the Tyrell Corporation and all that it suggests.

Of course, the majority of Bladerunner does indeed take place at night, but the metaphor (and the power of that sunset through the windows of the Tyrell Corporation) remains.  The world of cyberpunk is a world of perpetual autumn (the best of all possible seasons) rather than spring.

As long as I’m quoting past blog posts rather than actually writing something new, I think this section from my Minor Key Monday review of Autechre’s “Bike” sums up just how “epic” cyberpunk can feel if you are a sensitive soul like myself:

[Imagine yourself in] a futuristic dystopia during the golden hour in your anonymous apartment on the side of a giant steel skyscraper in that city from Bladerunner while you reflect on all that has been lost from the world.  And yet the sun is weakly shining through a hole in the ever present clouds and the electric birds you saved up for are chirping and whirring at the window and you realize things aren’t all that bad after all.

Maybe cyberpunk isn’t all that uplifting, maybe it is just the dark, fractured world it presents itself as.  But, maybe that improbable potential for happiness is why I love minor key music and the like so much.  There is a hidden joy buried within the sorrow, waiting to be discovered for those with the constitution to seek it out.

So, as long as I’m cribbing this entire review from past posts, here’s what I had to say about this remarkable film for my “Top Ten Best Films of the 1980s” post:

And sure, the final act devolves into a somewhat routine (at least when compared to the rest of the film) action chase scene, but Bladerunner is that rare film that creates a world so real, mesmerizing, and legitimately futuristic that upon its release it immediately entered into humanity’s collective unconscious as if it were always there.  There might have been cyberpunk before Bladerunner, but the decaying world of neon twilight visualized in this film forever defined what it was to be the “near-far” future.

you must love it a LOT.