Board Games: More than just Monopoly. 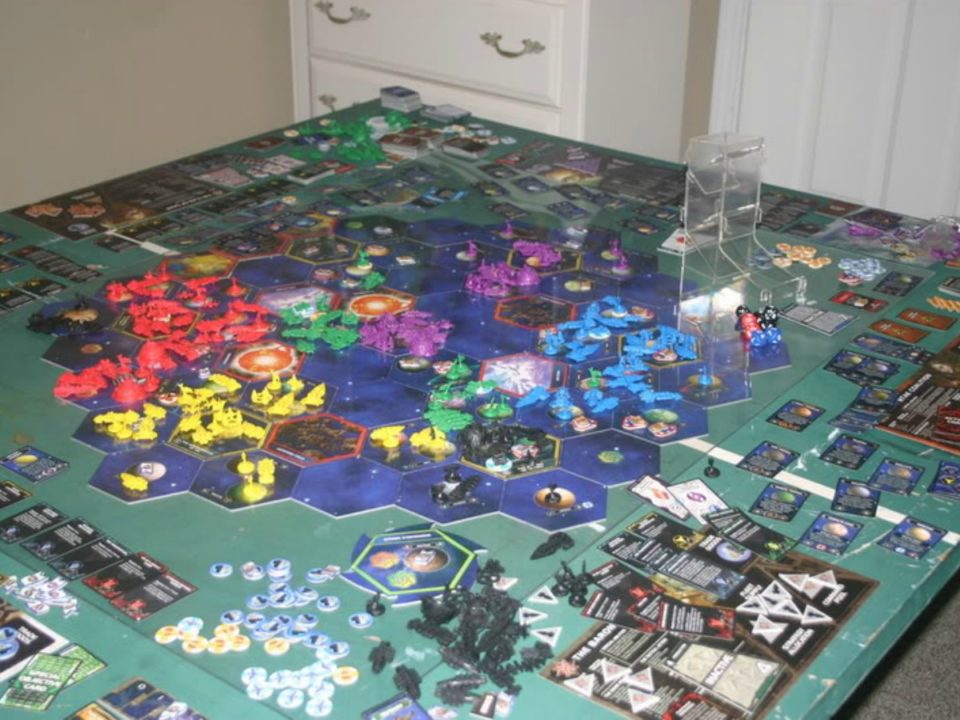 When most people think of board games, images of never-ending Monopoly games or completely arbitrary torture sessions of Candyland with younger family members quickly come to mind. However, this is not all there is to board games, and in the right settings with the right games they can actually be pretty cool. I am, of course, using “cool” in the loosest sense of the word.

First, board games are social affairs. Even the crappy ones (more on those in a bit) can be fun if you play with a group of friends with senses of humor. This is the most basic element of board games; they are effortless socialization in a box. This is also probably why nerds love them since social interaction is not your typical basement-of-the-science-building type’s strong point. But even for those of us able to talk to another person without starting the conversation with a sarcastic Star Trek reference, board games are pretty enjoyable. A bit of friendly shit talking, dumb jokes, groaning at turns of luck, a few beers, really not too bad of a time.

As true as all that is, there comes a point where you begin to think, “Yeah, sure, I’m hanging out with my friends and we are having a good time, but why do we have to be playing this stupid, boring, arbitrary game?”  This is the second main point, most “classic” games really aren’t that great–but there are other “great” games out there.

Many classic games are what you call “roll and move” games further corrupted by house rules until you are left with an overlong, boring ordeal in randomness. In these types of games (Sorry, Monopoly, The Game of Life), there is little to no actual decision making. The bulk of these games involves rolling dice and doing what they say.  I understand that the thrill of leaving your move up to chance and cheering or booing a good or poor dice roll can be fun, but (at least for myself) it is a mechanism that can quickly get boring.

Many other “classic” games have similar game design problems. Risk might give you some choices as to where to attack, etc, but the attacks are random affairs that favor the defender thus making the game length interminable and the strategy dependent largely on the dice rolls. Clue could be a somewhat interesting deduction game, hamstrung again by the movement dice rolls among other things.

Now, luck has an important part in game design (it keeps things exciting and helps to keep players of different skill levels in the game) but when the game is almost entirely luck, or contains a poor integration of luck into the game mechanics, the players are going to be in for a monotonous crappy experience. And when it comes right down to it, most of the games you can easily pick up at Wal-Mart etc are pretty crappy. Yet people keep playing them generation after generation simply for the nostalgia and the fact that it seems like they are the only games out there.

Up till about two years ago, I too thought that they were the only games out there. Then, some friends brought over some European game called The Settlers of Catan one night and I thought to myself, “sure, I kind of like games, I’ll try it out.” I soon realized that Settlers of Catan was like nothing I had ever played before. It was fairly simple (though tough to completely understand at first since, like I said, it was like nothing I’d ever played before), short (our first game took around 45 minutes…the next three that night were just as quick) and contained a nice balance of luck and tough decisions. Even better, the game was full of player interaction. We had to race each other to get to important parts of the game map, there was a constant pissing contest to see who could get the “longest road” (see the “shit talking and dumb jokes part” above) among other goals, and a major element of the game design involved the players negotiating with each other in order to trade resources.

In short, this game I had never heard of turned out to have everything a good game should have, and really opened my eyes to the shortcomings of all the games I had played before. As I looked for more games like The Settlers of Catan I found the unabashedly-named website www.boardgamegeek.com and realized that there were hundreds of games of similar high quality out there, many from Europe. It turns out Europeans take their games pretty seriously and do not just relegate them to the living room at grandma’s house after Thanksgiving dinner.

These “Eurogames” all seemed to share the same design goals as The Settlers of Catan (and having played a great many more of them in the past two years, there are a lot that I like even better). Most turned out to have somewhat short playing times (usually 40-90 minutes), simpler rules (they aren’t Candyland simple, but usually have rulebooks of only 5 or so amply illustrated pages), and much less randomness (there are still random elements, but emphasis is placed on player decision making, not arbitrary dice rolls).

Eurogames weren’t my only discovery, it turns out there are some good old fashioned American games out there that don’t suck as well; lovingly referred to as “Ameritrash” games to those in the know. Ameritrash games are usually longer, more complicated and more random (though still not at “classic game” levels of randomness) than their European cousins. Where they excel however, is in the “flavor” department. Admittedly, some Eurogames can be rather dry affairs with their succinct rulesets, elegant wooden pieces and themes that involve trading fabric in renaissance Italy. However, at the expense of some design elegance, Ameritrash games are an explosion of “chrome” rules (rules added to the core ruleset that only serve to add to the theme), plastic pieces and themes that usually involve something like space aliens attacking dinosaurs. It really comes down to personal taste, but I like them both.

There is one final major category of games, the wargame. Wargames are often the longest and most complicated of all board games, some even going so far at to call themselves a “conflict simulation” (consim) rather than a game. The simpler ones can have their place in even casual gaming groups, but the majority will only appeal to a small group of aficionados. I won’t go into them too much, but you will probably know after one try if they are down your alley.

Anyway, the point of that less than brief overview of board games for “game-snobs” is that the game itself can be fun and not just an excuse for social interaction. There is a whole world of games that you won’t normally find next to the “classic games” in the usual retail super centers, and if part of you thinks that maybe board games might be kind of fun if someone would just take out all the arbitrary random boring parts, you might want to check out some of the “other” games that are out there!

I mentioned it above, but the website www.boardgamegeek.com is a pretty great resource for board game information. The have a detailed database of over 50,000 board games complete with descriptions, pictures (where I got the picture of The Settlers of Catan for this blog post), reviews etc. The games are also conveniently ranked from best to worst so you can see how good the other users of the site think a game is.