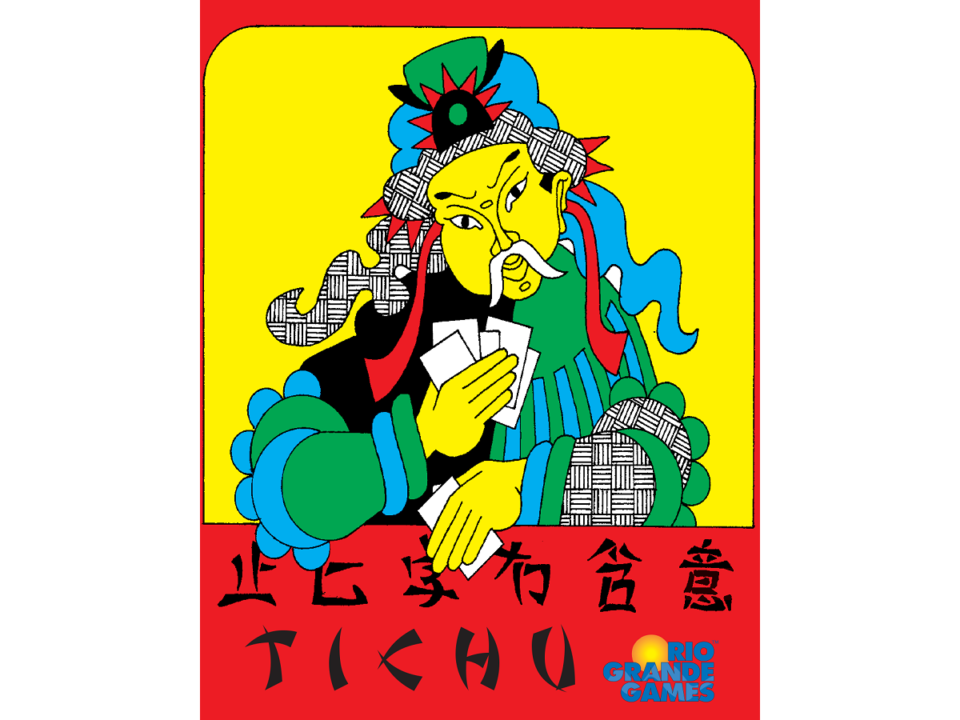 Though my board game tastes definitely skew a certain direction, you don’t always have to hide a great game system behind a mountain of plastic to get my attention. Today’s game, a partnership climbing card game is as simple as it gets components-wise: just a standard deck of cards (2-10, J, Q, K, Ace in four suits) with four special cards added to it. But, for those times where you have exactly four players (four players? In THIS pandemic?) there honestly aren’t many games I’d rather play.

Climbing card games are fairly common, and they all revolve around players taking turns playing successively larger cards until everyone has passed, at which point the player who played the highest card wins the trick and leads play for the next round. Basically, I play a 2, the next player plays a 7, the third player passes, the fourth player plays a Jack, it comes back to me and play a king, followed by the second and fourth player passing which means I win the cards played for that round.

Tichu (and many others) has the twist that you can lead a round with more than just singles, you could also start with :

This is the first thing that makes Tichu shine. The best climbing games front load the decision making where you are dealt your starting hand of cards (the entire deck is dealt out) and then must decide how to split it up. Should I keep that pair to make steps? Or should I make a full house out of it? Should I use those three aces as a triple, or split them into singles? And then, you see how long you can stick to your plan before deciding maybe making the fool’s play of keeping those aces as a triple actually IS a good idea based on how the current round is playing out.

There is a real thrill in getting dealt out your cards (by NO means should you play the suggested “everyone takes their cards from the top of the deck one at a time” rule), picking them up, and giggling at all the aces and special cards you see (or, flipping the table over in rage at only having a 9 high). That one moment of looking at your new hand is a delight in and of itself.

Tichu is that relative rarity in the modern gaming world, a partner game. You and the person across the table are working together to go out before your two opponents. If you do, you will get 200 points (games are played to a thousand). If one team does not completely play out before both of the others, points are based on tricks won, with 5s being worth 5 points, and 10s and kings woth 10 points.

Then, piggybacking on the thrill of flipping your new hand up, everyone has a chance after looking at their first 8 cards only to call “grand Tichu” a 200 point bet that they will go out first. Not knowing the rest of your cards, it is a real gamble, and you can always make a smaller 100 point bet that you will go out first after you’ve seen all your cards (but before you’ve played any), but both of the point bets are fantastic additions to the game.

After looking at your cards, the final bit of hand preparation is to pass 3 cards (one to your partner and one to each of your opponents) before play starts. This is done to get rid of low single junk to your opponents, or to help your partner if they made a point bet.

After that play starts as normal with any climbing game, the first player picks a card or group of cards to lead with, and then everyone tries to play higher around and around the table. This is where the 4 special cards come into play:

The 1 is simply the lowest card in the deck, and signifies the start player for the game. The “dog” is a card that can only be led to start a new trick, and it passes priority to lead back to your partner (very useful if they have made a point bet). The Dragon (top left) is the highest single card in the game (and will win any singles trick), and the Phoenix (bottom left) is a wild card that will also beat the most recently played single non-special card (making it useful to both finish off large sets of cards, and pull out a clutch win over an ace high singles trick).

These special cards add a lot to the game knowing that there are are super cards waiting out there to ruin your day. Much of the game is a standoff waiting for the special cards to get played (if you don’t have them) so that you can finally start dropping aces with impunity.

The final twist in Tichu is the bomb. A bomb is either a four of a kind or (much more rarely) a straight flush, neither of which can use the Phoenix. Bombs can be played at any time, even in the middle of someone else’s turn, and instantly win the trick (beatable only by a higher bomb). They are semi rare, but you will probably see one every other deal, and knowing a bomb could be out there to ruin your best laid plans is pretty nerve-wracking too.

Nothing I have described here is really all that novel. But something about the simple climbing game framework, tied to “no table talk” partnership, spiced up with a couple doses of point betting, and then sprinkled with just enough special card/bomb wrinkles to keep everyone guessing really makes this game work.

I can’t count the number of games of this I have under my belt, and each and every time I finish kind of wishing I could play a few more hands. And I don’t know what higher praise I can give for Tichu than to point out how rare it is for a gamer like myself to finish a game wanting more rather than moving on to the next giant box full of plastic and dice.

This is a really good game for play after to work, when i finish in my office such us a psychologist in Marbella, is nice to play this game