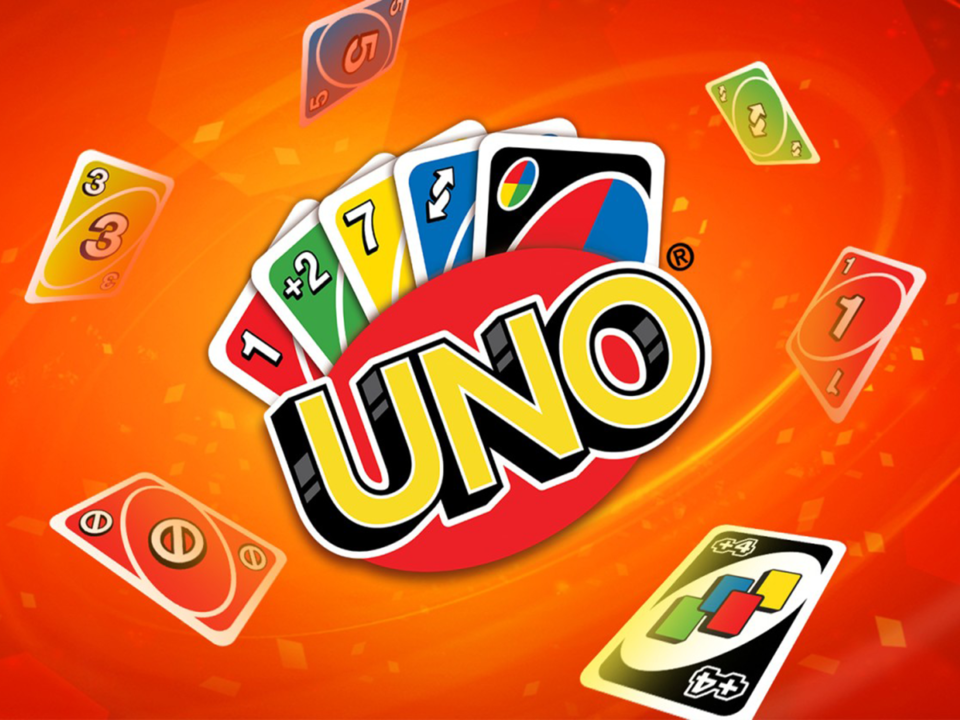 This is an April Fool’s post, unless you are in some sort of bizzare, bad board game based Die Hard With a Vengeance situation, under no circumstances should you ever play something as random and decision-free as UNO.

I know UNO might seem like an odd pick for someone whose board game elitism approaches levels of classism usually only reserved for the most problematic of totalitarian regimes.  However, the classics are classic for a reason, and over the years I’ve discovered a surprisingly deep and immersive experience is to be had with the brilliant game design that is UNO.

At 45+ years old, the elegant game design of UNO has aged like fine wine (it’s not like each generation would pass a BAD game on to the next after all).  UNO‘s “take that” elements combine perfectly with gameplay that is designed to prolong the game (and, importantly, the FUN-O) to create an experience that almost feels like it is playing itself it is so refined.  Even if someone *is* about the end the game by going out, the brilliant “you didn’t say Uno!” rule ensures one final chance to keep the game going.  Myself, I prefer to play with the house rule that each player also has to call “dos,” “tres,” “quatro,” etc. (stopping at fourteen, which I can never remember in Spanish).

Importantly, UNO isn’t just a FUN game, it’s also drop dead GORGEOUS.  The simple, modernist design guides the eyes to classic cards like “draw 2,” or “green seven” like it was designed by Don Draper himself (which, yes, I know, he only wrote copy–but you get the idea).  Of course, as you may remember from my Krosmaster post, no matter how good a game looks, there’s always room to make it look even better.

I started my quest to “pimp my UNO” by working on the issue of holding the cards.  If UNO has a problem, it is that it can at times be hard to hold the massive piles of cards you will draw over the course of a game.  Thus, a little time with a router and some basic woodworking tools and I was able to create these custom UNO card holders for our UNO group: 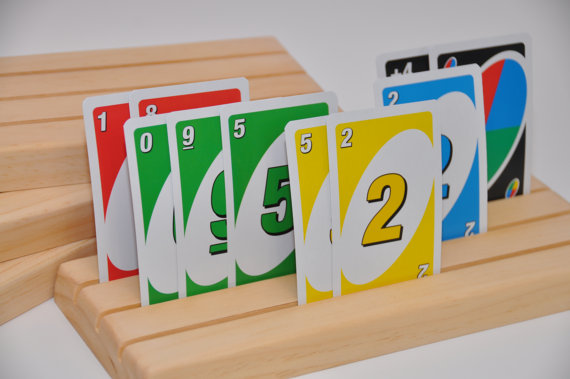 I didn’t stop there though, I also took my cards down to Kinko’s and got them massively enlarged and printed onto 1000 gsm cardstock. Imagine the delight of my weekly UNO playgroup when I surprised them with this set of giant UNO cards for our “UNO night” last Wednesday (though, I’m going to have to get my hands on some serious lumber to update my card holders now): 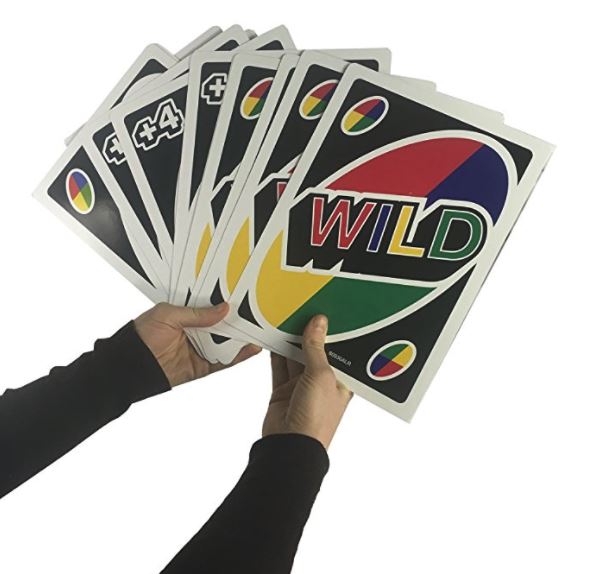 Some of the older members of our group really appreciated the increased text size on some of the wordier, harder to read cards like “Wild Draw 4.”

As a quick note on “Wild Draw 4,” do make sure you play with the appropriate rules–it is a widely held misconception that this card can be played whenever you want, when, in fact, the rules specifically state it can only be played when you have no other cards to play!  Playing with the appropriate rule here MASSIVELY improves game-play as it will limit playing of this powerful card to non-game-play breaking situations only.  Not that our group is always a stickler for the rules…we do play with a variant where any draw-2 cards played apply to the WHOLE table in order to keep the game from ending prematurely.

Bottom line, if you have written off UNO as “a bullshit, totally random kid’s game that might as well fucking play itself and you would rather burn your entire fucking game collection than be forced to play for even five minutes” in the past, you might owe it to yourself to give it another try.  You might just find your new favorite game laying hidden within the piles of color-coded cards you had previously written off.