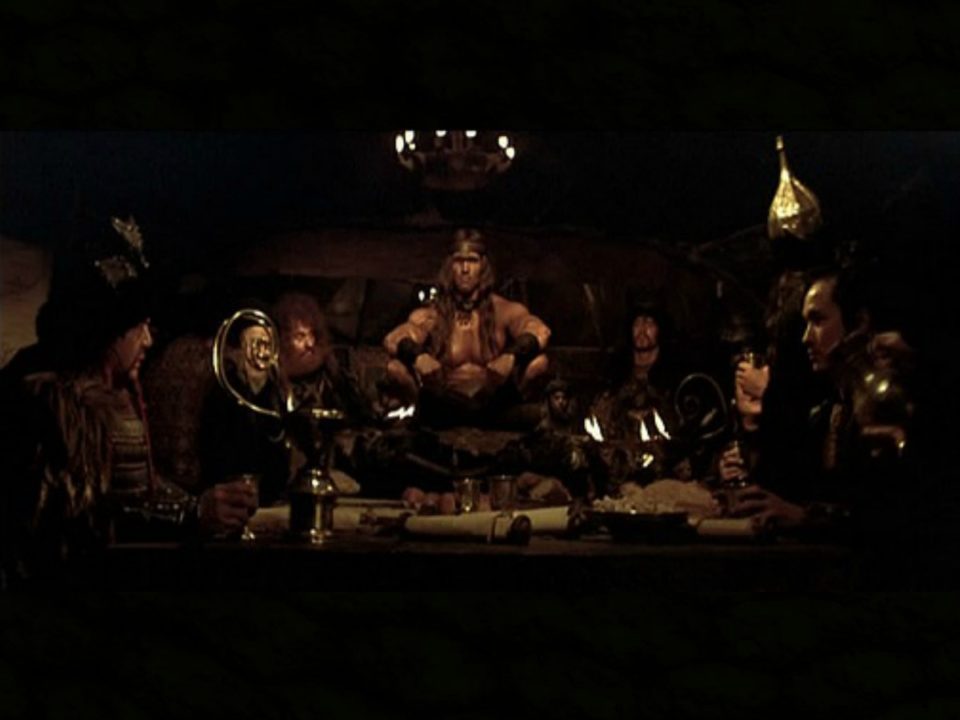 Sometimes it’s easy to justify enjoyment of certain kinds of films by simply calling them “dumb fun.”  However, films like Conan the Barbarian seem to push the limits of dumb fun almost into the realm of, if not “high art,” at least respectability.  I think the best summation of where Conan the Barbarian stands on this spectrum was a review I once read said it “raises a small cheer as a movie for European rather than American illiterates.”  But, let’s be honest here, the high art/low art divide is just a crutch that enables the weak of spirit to reconcile the fact that they kind of sort of liked Harold and Kumar Go to White Castle better than Rohmer’s Triple Agent.  Harold and Kumar is not, of course, a BETTER movie, it’s just…um, different or something, so everybody and every film can save face.  So, it really doesn’t matter how sophisticated the group of illiterates to which this film appeals might be, this post is just about owning the fact that Conan the Barbarian kind of just plain kicks ass.

Now, let’s be fair here, the humor can be as broad as Conan’s shoulders in places, Arnold can be a little lost when trying to project emotions beyond bewilderment or battle fury, and the story doesn’t exactly reinvent the wheel of pain. But, like romantic comedies, sword and sorcery epics should by no means be judged harshly for not breaking out of genre conventions.  Conan the Barbarian is primordial, lizard-brain stuff.  All that matters in this movie is that few stood against many.  This is a movie that celebrates the simple joys of killing a vulture with your teeth while crucified to stay alive until your faithful companion can come rescue you.  It is a film full of child labor, snake cults, witch sex, temple defiling, and necromancy.

Anyone who saw Pumping Iron, or any movie from Arnold’s long post-Conan career, knows about the ridiculous charisma that surrounds America’s favorite Austrian like a swoll glow.  Even his naive acting style is naturally suited to the barbarian mentality of his character.  That’s part of the joy of the real Conan, he possesses a certain low cunning, but for the most part his go-to problem solving technique is smashing.  We could all be so lucky to live such a simple life.

And really, the biggest draw of this film, is that it looks amazing.  Something about the world it creates just feels like it is from a time before the oceans drank Atlantis.  There is an air of seriousness and respectability that is lent to the film by the way in which it is shot, something sequel sorely lacks.  The temples, the swords, that giant fucking hammer,Thulsa Doom’s awesome snake helmet, the muscles, everything in this film taps into some lost ancestral memory of a time that only exists in the excited minds of adolescents reading Tarzan books.  I might be a simple man, but I know what I like, and that kind of stuff is almost as good as a rom com meet-cute.