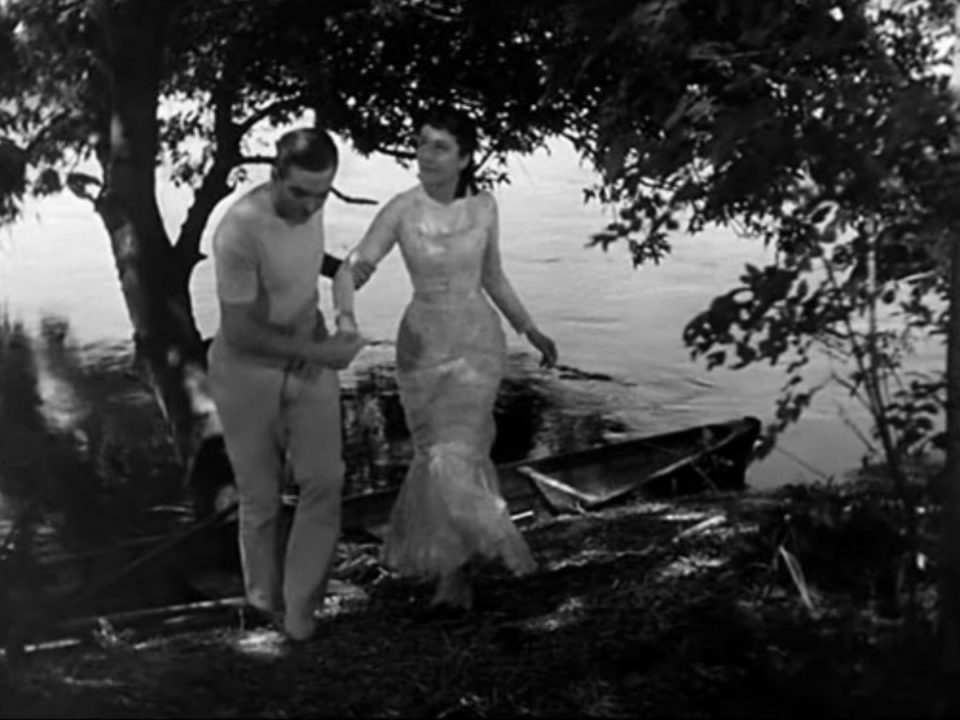 “Young people prancing around in the country”  is right up there with “left handed forms of human endeavor” on my list of all time favorite movie subject matters.  You name it, I heart it: People on Sunday, Smiles of a Summer’s Night, I even like Woody Allen’s A Midsummer Night’s Sex Comedy far more than I probably should.  In fact, I like the subject so much that the first (and, to date, only) “real” movie that I made myself, A Sunday in the Country, was as much influenced by the film I’m discussing today, Jean Renoir’s A Day in the Country, as it was by my all time favorite director Eric Rohmer (who was no stranger to good youthful countryside prance himself).

A Day in the Country is supposedly an unfinished film, but it is such a flawless and complete work that you would never be able to tell it was incomplete–if that were even true.* Set in France in 1860, A Day in the Country chronicles the Sunday countryside excursion of a bourgeois couple, their daughter, her halfwit husband to be and the senile grandmother.  As they chatter on with their banal observations about the charms of nature their paths cross with two working class men whose infatuation with the daughter complicates things a bit.

It is a film of lighthearted comedy, youthful attempts at lovemaking, breathtakingly beautiful shots of nature and an ending that puts your balls in a vice and gives them about four too many turns of the handle.  Part of the appeal of films like this is how idyllically nostalgic they are.  No one could possibly live with such lighthearted frivolity beyond the innocence of childhood.  Indeed, it is only in our half remembered youth that the light strikes the trees in quite the same way it does in A Day in the Country.

Much credit for this atmosphere should go to cameraman (and Renoir’s nephew–though his skill immediately banishes any thoughts of nepotism) Claude Renoir.  His camera effortlessly glides through the brushes, just over the rain spattered river and between the trees with the grace and fluidity of an Ophuls film.  There are no high contrast lighting effects, merely a clear naturalistic glow that never makes the black and white film stock an impediment to capturing the magic of the golden hour.

Part of the brilliance of A Day in the Country (and, indeed, the “country prancing” genre itself) is the juxtaposition of heavy real world matters of human interaction with a wonderland of natural beauty.  If the natural world of A Day in the Country is one that only exists in nostalgic memories of our childhood, then, when love is incorporated into such an idealized world, it becomes as idealized in the same way that the sunlight does when it shines through the trees onto the lover’s secret spot beneath the singing bird.  The pain and longing of the ending are heightened through this idealization, but so too is the happiness of the brief moment when the characters succumbed to the embrace of love and left the real world behind.  Though the moment was over almost as soon as it started, in the end, no matter the heartbreak, the viewer has to think that it was worth it.

*As near as I have been able to discover (from Raymond Durgnat’s book Jean Renoir), the film (intended to be a short film) was shot from June to September in 1936 during which time the production was so plagued by rain delays (and, according to lead actress Sylvia Bataille, the ensuing animosity among the crew) that the producer Pierre Braunberger (or, also according to Sylvia Bataille, Renoir himself) pulled the plug.  However, very few (if any) scenes were missing from Renoir’s original script (indeed, nothing is left out of the short story by Maupassant) and thus an early version was edited by Renoir’s companion Marguerite Renoir (possibly with the supervision of Renoir himself) in 1937.  This version was destroyed by the Germans, but the unedited footage survived the war to be reconstructed into the edit that is available today by Marguerite Renoir, Visconti and others (possibly even Becker).