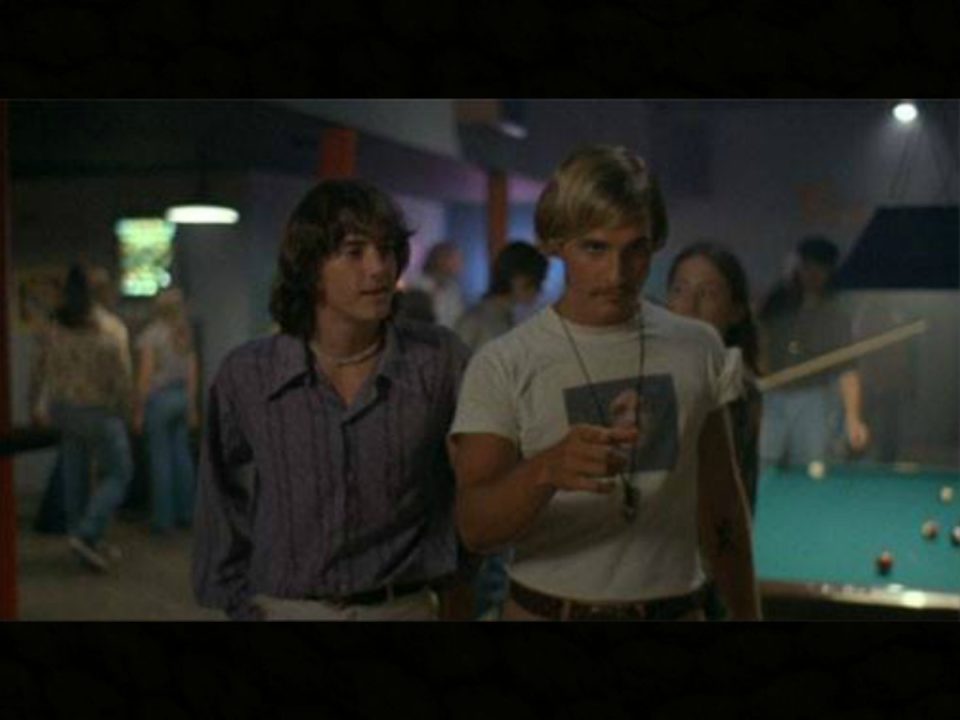 So, even though I’m in film school now and people are making me write about movies, I still like writing about movies in my free time.  Thus, I’m switching from the monthly “Internet Meme Monday” feature to a more sustainable monthly “My Favorite Movies” feature.  I’ve written about my favorite movies in the past, and this “new” feature is just a more commonly occurring version of my “My Favorite Movies” series.  So yes, what all this boils down to is that there is now only 1 “funny” Monday feature a month.  Sorry!  I’ll try to work a few linguistic puns into Middle Earth Monday to make up the slack!

It’s really about time I wrote about Dazed and Confused.  I mean, my aside from my latest Halloween costume, I watched it 4 times last year alone, and this is all well after the D&C rediscovery heyday of 2006 when my dad, brother and I would easily watch it 4 times a week without problem.

I am still taken aback by just how enduring its appeal is.  I remember watching it in high school, and how a lot of the guys (much to Linklater’s horror, I’m sure) made spanking paddles after it came out.  I remember quoting “I get older, they stay the same age…” along with the rest of them (at least until I got old enough that it wasn’t funny anymore).  But it wasn’t until about 5 years or so ago when I realized it wasn’t just a fun high school movie, but rather one of the great works of cinema.

Linklater follows his intertwined ensemble cast around their one crazy night with an ease that would make Robert Altman raise an eyebrow in appreciation.  Even the rather obvious soundtrack is a marvel.  Linklater somehow manages to cram every played out classic rock song ever into his movie and it amazingly ends up coming off as kick-ass rather than overbearing. Opinions differ on how well the non-actors carry themselves, but I doubt anyone would argue that Mathew McConaughey and Ben Affleck did their best work in this film.

However, as I’ve said before, plenty of films are just as “well made,” what makes Dazed and Confused truly brilliant is what lies underneath.  There is a certain part of the Midwestern American collective unconscious devoted to the concept of “small town high school.”  The real genius of Dazed and Confused is that it is able to capture this concept as well as Tolkien captures that part of our collective unconscious that is devoted to “being all gay for Hobbits and shit.”

It is a complex concept; small town high school was an awful, glorious, unendurable, wonderful place that one remembers fondly but would never want to repeat again.  It was life in microcosm; the fishbowl you lived in before you realized that all of your problems didn’t matter in the real world (even if they ended up being the same old shit in the end).  It was a fascinating place where a small group of people put ultimate importance on interactions that were only going to last another year before being rendered pointless.

High school was a timeless place as well.  Though the film is set in 1976, I could almost swear that my high school in 1996 was exactly the same.  The trick with any film like this is to avoid turning into simple vapid nostalgia, especially if it is nostalgia for something that no one really wants to go back to anyway.  And this was Linklater’s masterstroke.   Dazed and Confused occupies that middle ground between the unpleasant viciousness and laid back nostalgia of high school memories while avoiding both of their drawbacks.

As Randall “Pink” Floyd says in the film: “All I’m saying is that if I ever start referring to these as the best years of my life – remind me to kill myself.”  And he’s right of course.  And yet Dazed and Confused lets you eat your cake too.  It shows high school for what it was, and yet makes you nostalgic for it all the same.  Yet it is a complex kind of nostalgia.  It pulls off the miraculous feat of being nostalgic without being pandering–it lets you live in the past without lying to yourself.  Maybe a high schooler (like I was when I first watched it) won’t get it.  But for those who have passed through the gauntlet of high school and are able to look back through the safety of the years, there are few better cinematic experiences out there.

Dazed and Confused is one of my all-time favorites. Great job describing the appeal!!

I’ll probably just do an Oscars list as soon as they are announced.

I may be remembering wrong, but I believe on more than one occasion you’ve cited “The Wedding Planner” as Matthew McConaughey’s best work.

While he is definitely charming in The Wedding Planner (despite the problematic fidelity issue), I went back through all my McConaughey movie Daily Movie Reviews…the best praise I gave him was for my Sahara review:

“Zahn was a great sidekick, the action scenes were mounted well, and if McConaughey has never equaled the brilliance of his role in Dazed and Confused, he was at least a serviceable leading bimbo.”

Thus, I’d say my MM praise has been consistent (though I did even kind of like Fool’s Gold, which says something of how far I’m willing to take the McConaughey praise).

All right, all right! You know, you’re not actually supposed to take me to task when I tease you about your romcom predilection. Come on, Unruh, play by the rules!

It’s best not to joke when it comes to MM.

J. tells me that we watched this movie once, but I honestly remember absolutely nothing about it. I guess I’ll have to watch it again.