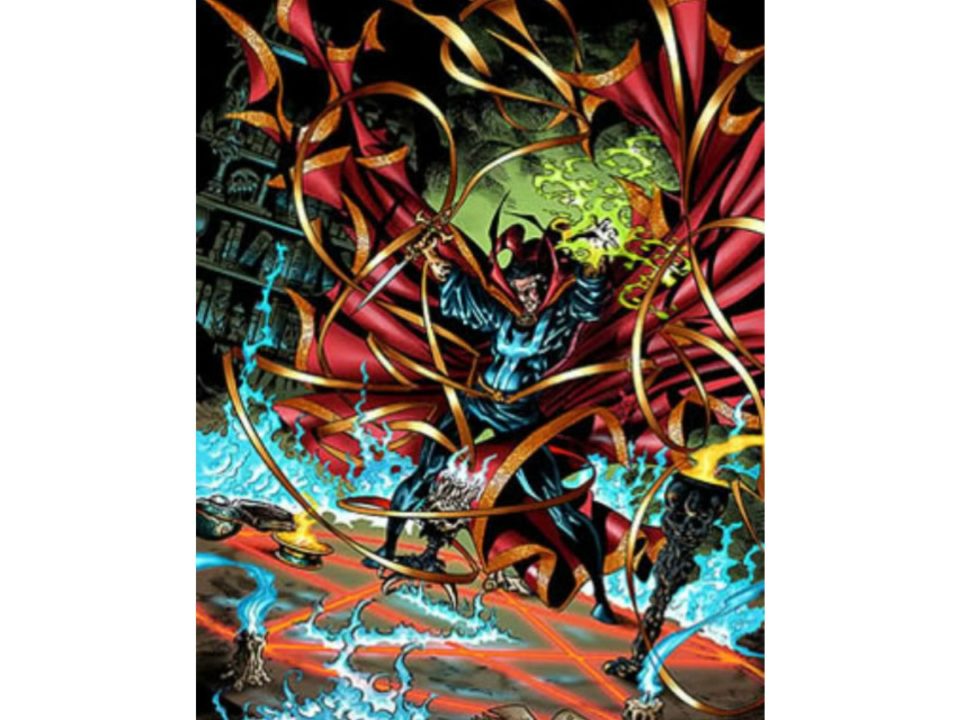 My friend Chris (mfc) once commented on how the first question a lot of people ask when they find out you like comics is “what is your favorite superhero” and yet most comic fans don’t actually have an immediate answer.  I mean, Daredevil has been one of my favorite series for a long time running, but Daredevil is kind of an asshole when I think about it, I wouldn’t call him my favorite superhero.

I mean, in the case of Daredevil it’s a very well written series despite being about a guy who is kind of a douche.  But even in the case of those series about superheroes that I actually think are pretty cool it’s hard for me to pick one as my absolute favorite character.  But this post is about picking just one, and when I really think about it I have to go with Dr. Strange as my all time favorite superhero.

Dr. (Stephen) Strange was a brilliant (and arrogant) surgeon who suffered nerve damage to his hands after a car accident and was forced to give up his profession.  As a last ditch effort to cure the nerve damage, Dr. Strange set out to find that comic staple of the “wise master deep in the Himalayas”.  There he has a bit of a change of heart from his former arrogant ways and studied the “mystic arts” under “the ancient one” eventually becoming the “Sorcerer Supreme” for our dimension.

Dr. Strange’s “mastery of the mystic arts” make him one of the most powerful superheroes in the Marvel Universe.  This is actually a major strike against him for many readers since there are no set limits to any of his mystic powers causing him to occasionally be used as a “deus ex machina” to take out super powerful threats or “fix” extremely destructive events.  In fact, most of the major events in recent times either use him in this way or have found some way to remove Dr. Strange from the action so fans aren’t yelling “why doesn’t he banish all the alien invaders into another dimension!”  But that isn’t Dr. Strange’s fault, that is the fault of lazy writers–you can still tell a good story with him.

However, being super powerful isn’t what appeals to me (though, why just pick one power if you can be a flying, telepathic, energy bolt shooting, hypnotizing mo fo?) about Dr. Strange.   I mean, Superman has a lot of incredibly powerful abilities too, but he’s a bit of a white bread boyscout and I wouldn’t call him one of my favorites.  I think the key for me is that Dr. Strange gets his powers from obscure mystic occult stuff.  He’ll even resort to the “dark arts” if he has too, and everyone knows the “dark arts” are basically hardcore.

He’s still a little arrogant and even selfish at times but only because he’s fully aware of his power and understanding about things that others could not even begin to grasp.  And it isn’t all mystic power with him, he’s a smart dude that the other heroes respect and listen to even in non mystic matters.  He even knows “some shit” in case he’s ever without powers and needs to bust out some kung fu.

And let’s not forget something as basic as his name, I mean before I even knew who he was I was like “Wait, there is a super hero called ‘Dr. Strange?’  That’s awesome!”  Hell, he even lives in something called a “Sanctum Sanctorum” in Greenwich Village; he’s a hip dude.  Dr. Strange is basically a counterculture Superman, the kind of guy who probably even tokes up every now and then instead of just destroying some hippie’s stash with his heat vision like Superman probably would.  I suppose that isn’t really fair to Superman, but hey, this is Dr. Strange’s post…and he could totally kick Superman’s ass anyway.

If you are looking to read some Dr. Strange stories there have been a lot of good books lately featuring him.  Brian K Vaughn’s miniseries: “Dr. Strange – The Oath” is very good and a good place to start.  Also, he has been a part of the New Avengersfrom Issue 26 on, and was also prominently featured in the surprisingly entertaining New Avengers – Illuminati and World War Hulk.

Hey, I just stumbled across a website that was waaay cool. it’s short page.

Calling Dr. Strange (who is, I agree, among the best characters in comics) a “counterculture Superman” is a pretty damned good summation. The character’s most popular period was in the late ’60s, when Marvel was pushing their line as “pop art” rather than merely calling them comic books. All the hipsters were into Dr. Strange, and many of them kept his 1970s appearances going, too. Unfortunately, those aging hipsters dropped out of comics entirely in the ’80s, which is why the character’s publishing history has been so sporadic since then.

Ironically, Dr. Strange co-creator Steve Ditko was (and, by all accounts, still is) an arch-conservative who would NOT have appreciated Strange’s appeal to the counterculture movement. Funny, no?

Anna, that page is sweet!

And Mike, that is interesting about Ditko being ultra conservative…I would have thought the guy who came up with those early stories had to have tried acid at least once 😉