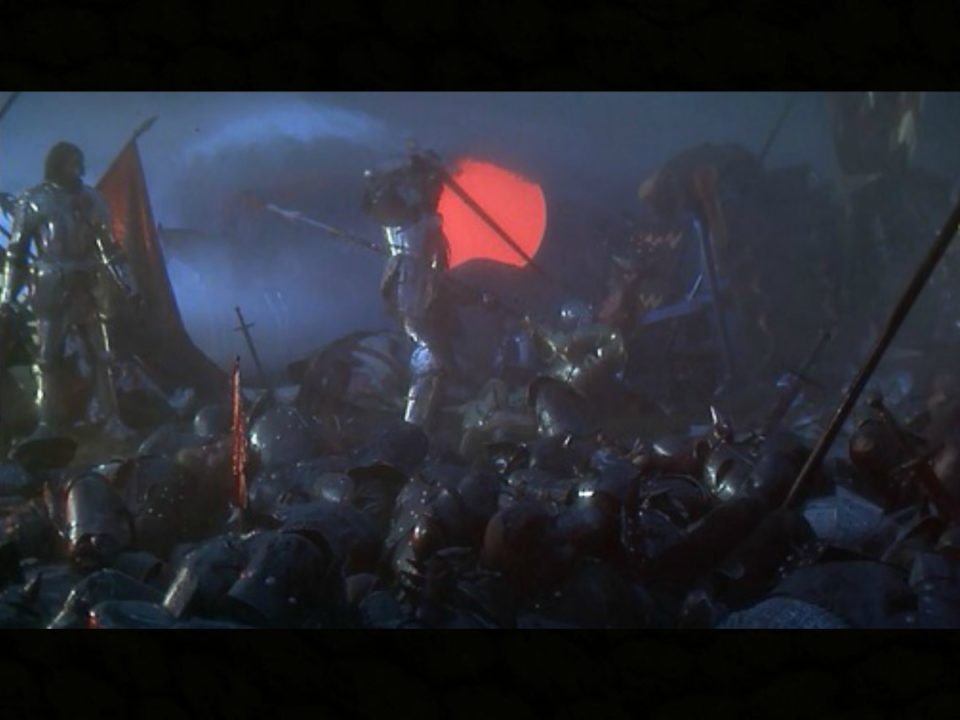 Every time I revisit John Boorman’s Excalibur I enjoy it a bit more. And since I thought it was pretty awesome to begin with, I can’t think of a better indicator that I should probably write a “my favorite movies” post about it!

I should probably start by pointing out that the movie can seem like a bit of a mess. Director John Boorman has crammed so much into his film that it can be tough to get your head around it, especially if it is your first viewing. Scenes do seem to fly by and if you miss a second of dialogue you might miss the introduction of a main character, or even the reason for the next battle scene!

Maybe this is why it has grown even more powerful with multiple viewings. With familiarity, the plot seems clearer each time. Actually I have been pretty impressed at how effortlessly the amount of detail that has been crammed into the film seems to flow together. Even the characterization seems well done: Arthur, Lancelot, Guinevere, Perceval, Merlin and Morgana are all fleshed out quite well considering how much ground the story covers.

However, the real brilliance of Excalibur is in the atmosphere and themes. It is a beautiful movie full of lush forests, smoke filled battlefields and bubbling streams. Over such magnificent images, lines of dialogue like: “Behold! The Sword of Power! Excalibur! Forged when the world was young, and bird and beast and flower were one with man, and death was but a dream!” don’t seem quite so cheesy. Well, ok, that still sounds cheesy, but if you are all gay for hobbits and shit like myself, it is pretty epic and awesome too.

Speaking of hobbits and shit, John Boorman had intended on filming The Lord of the Rings, and only made Excalibur when he was unable to secure the rights to Tolkien’s book. If you look at Excalibur a bit more closely it is actually strikingly similar to The Lord of the Rings (and thus, much of its appeal to myself becomes clear).

First, both stories draw from the same archetypical material. And old wizard calls the young hero onto the path of adventure. A talisman of great power figures prominently, while themes of resisting the corruption of power, questing against evil and bravery against all odds dominate. Even the aged king, riding to battle once more is represented, or as Arthur puts it: “Now, once more, I must ride with my knights to defend what was, and the dream of what could be.” King Theoden taking up helm and hauberk for one last ride to glory just happens to be one of my favorite parts of The Lord of the Rings as well.

Then there is the overarching theme of the end of the old days, the loss of the age of myth, the passing of the elder ways. The time of Merlin and Gandalf has come to an end, cutting the epic deeds with melancholic sorrow. Both stories end with a single ship bearing the last remnants of the olden times over the sea and out of our world into the realm where such things never die. Since I get half a stock at the mention of “that which once was”, obviously I would say that Boorman picked the correct theme from Lord of the Rings to focus on.

Bottom line, Excalibur is one of a kind. For any perceived flaw, the film more than makes up for it with exactly the right kind of fantasy atmosphere. Watching Excalibur makes me really wish that Boorman would have been able to make The Lord of the Rings, and trust me, coming from myself, there isn’t much higher praise.

I know I like to drop the occasional snide remark about Peter Jackson’s Lord of the Rings movies being just “ok”, but I honestly think Boorman’s version would have been something I would have liked much better. The new movies are not bad, but they just strike me as your typical, albeit well made, Hollywood blockbuster. I could fill another post with my reasoning, but at the end of the day, I just can’t get too excited about the new Lord of the Rings movies. Boorman’s version would have been a flawed masterpiece like Excalibur, but I’ll take a “flawed masterpiece” over “above average Hollywood” any day.