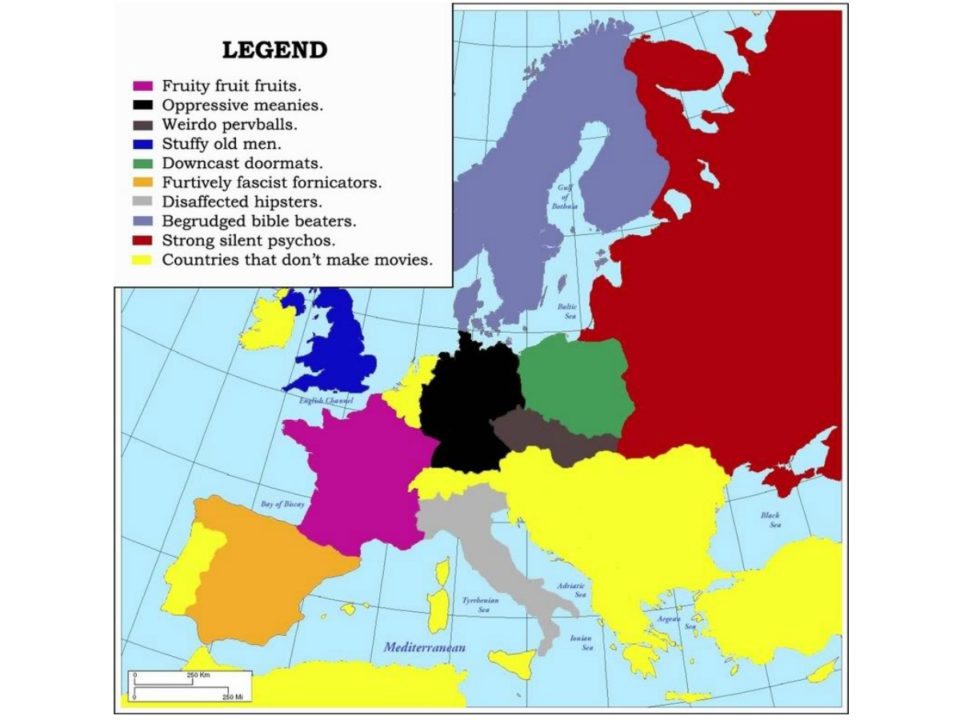 I don’t like to stereotype, but…French movies are a little fruity. German films? Not the greatest komedies. Polish cinema? Heartwarming is not exactly the word I’m looking for. Each country’s film output has certain indefinable characteristics, and it is the goal of this post to pass on some of these fun facts to the layman. So for those of you who would like to pre-judge all future movies from European countries with a quick generalization before you watch them, this list is for you! I should point out that many of my best friends are of European descent–just wanted to clear that up before I get on with my most stereotypical post yet!

France – While there is the occasional hardcore or brutally nihilistic French director, the other 97% of films coming out of France take place “on holidays” and have a certain spring to their gait. If you want to see young couples frolicking through flowery meadows by day and having intellectual conversations while eating cheese by night, France is your country.

Germany – There are no exceptions to this one, the Germans are some brutal, stern motherfuckers. One of the few attempts at German Komedy that have seen involved a retarded man who had sex with dead flies while the protagonist shoots his own girlfriend for money. While not always bizarre, there is a certain perverse undercurrent arising from oppressive atmosphere in most German films. Oh, and they also like domination, descents into madness, downcast skies, dwelling on fascism and long walks on the beach…of DEATH!

Poland – Though I have never been there, it seems the sun never shines in the Eastern Bloc countries. The forecast for your Polish cinema? Gloomy! I would guess that the thick haze of repression is what blots out the sun so well. Also, some of the Polish films seem a little preoccupied with WWII. I guess they kind of got a raw deal in that war or something.

Spain – Spanish films have a strange combination of sunny siesta inducing skies tempered with fascist guilt. No matter how cheerful the landscape, Spanish cinema’s fixation on both a regret of and subconscious longing for days with Franco always finds a way to make a bright day gloomy. Spain was a bad guy in WWII and didn’t do anything more impressive than bombing its own cities…time to get over it. Oh, I should add that at least those self loathing fascist Spaniards like to “do it” in their movies.

Italy – Instead of wallowing in self pity like their Spanish cousins, Italian films have managed to take their own WWII debacle and turn it into icy detached alienation. Characters can most often be seen partying with rich people, doing it, or acting realistic. They always look cool, but don’t actually enjoy any of it.

England – So preoccupied with keeping a stiff upper lip, England’s film output is so unimportant that their best director jumped ship in the 30s. The only films worth sitting through seem to be a few comedies from the 40’s and anything made by directors who work in a team. All other English movies fall firmly under the descriptor: “stuffy”. So do the previously recommended movies really.

Scandinavia – It seems like more than a coincidence that the European countries with the highest suicide rates and most time spent in darkness also make the films that are most preoccupied with religion. Show me a Scandinavian movie that doesn’t deal with a crisis of faith and I’ll show you an English film that hasn’t managed to insert a boom mike up its own ass and then stand at attention for hours on end. Scandinavians also seem to like to stare off in perpendicular directions while they talk to each other in monotones.

Russia – Like the rest of Eastern Europe, Russian films are cold, grey, bleak, forlorn affairs. The difference is that Russians appear incapable of whining about it (actually, incapable of weakness in general). I’m pretty sure a Russian toddler could kick my ass without half trying. Typical examples of Russian cinema include biopics of murderous Czars and films about watching your mother die slowly of a terminal illness. And it’s really fucking cold over there.

I hope this list was helpful to those of you who may not know a great deal about some of these country’s fine cinematic traditions!