A Graphical Breakdown of the Hierarchical Dichotomies in Britney Spears’ Circus 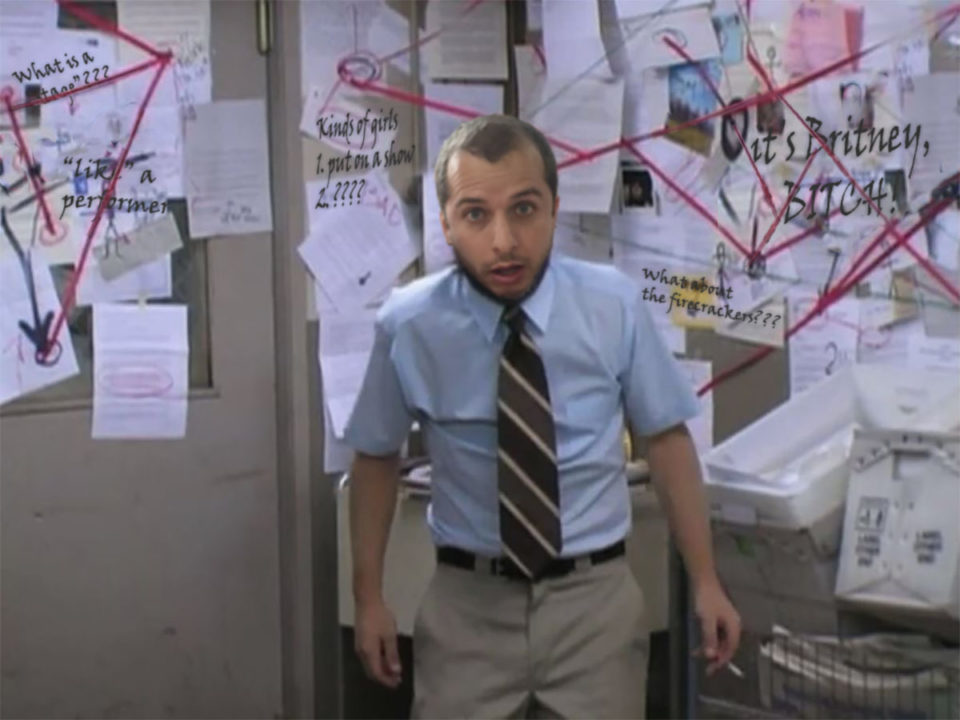 Circus, for those not familiar with it, is a song FULL of dichotomies–from its first words, Britney makes it clear that she views the world in binary terms:

However, if there are only two types of people (entertainers and observers) but there are also two types of guys out there…then perhaps the bifurcated organization of people in the world is messier than Britney suggests in the opening lines.  Today, I jump down more than a few rabbit holes to attempt to get to the bottom of all this.

My first thought was to set up a Venn diagram with a bunch of cute intersecting circles, however, as I labored over it, I realized that a Venn diagram really wasn’t suited for what I wanted to represent: 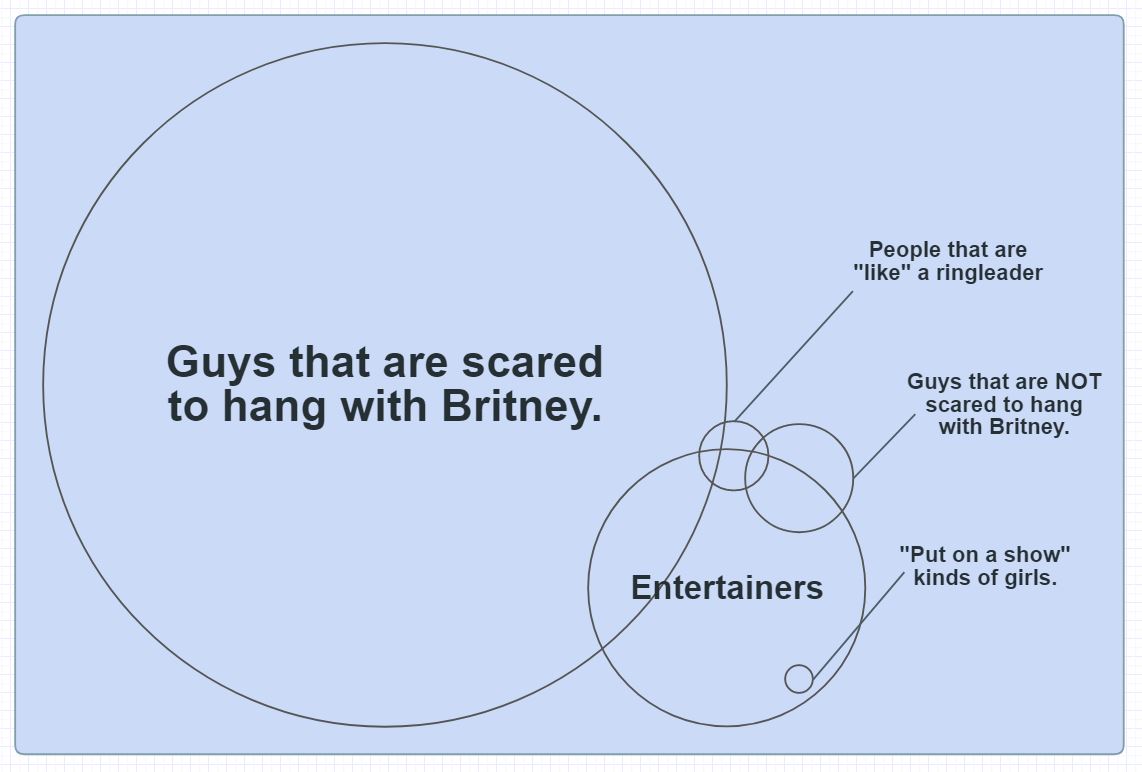 First of all, the whole point is to start with Entertainers and Observers, and then go from there…this shows just Entertainers and various relations to them.  Additionally, I at first wanted the rectangle to represent Observers (and even calculated the area of two circles that would represent half the area of the rectangle so I could have an accurate visual representation of guys out there), but, that’s not how Venn diagrams work, and the whole thing just kind of crashed and burned.

But then I started thinking, Circus has a lot more dichotomies than just those two.  So I made a list:

I did some quick math here and it looked like I now needed a graphical way to represent 2^10 types of people in the world (actually less since some of these are sub-hierarchies).  This led to my next breakthrough: technically I just wanted a way to represent hierarchies that arise when multiple dichotomies intersect.  This led me to use a circular dendrogram, a type of graph that was able to show all the branching hierarchies my heart could desire.

Before I get to the graph itself, a few notes on my methodology.

First, I enlisted some help to check my overall thinking by contacting an old friend/fellow undergrad philosophy classmate who is now a professor of this shit (philosophy, not Britney) at UCLA: 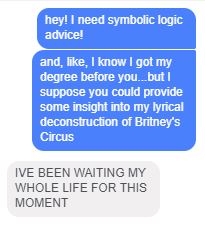 She primarily made sure to clarify that technically most of my dichotomies (at least the ones where I used an “implied” opposite) were just “p” and “not p”…but we both agreed that relaxing the rules to make a close-ish synonym for “not p” was probably comedically justified.

Also, I should point out that none of these are real dichotomies any more than the world can actually be broken down into two neat categories of entertainers and observers. My idea of a dichotomy here is as problematic as Britney’s insistence on adhering to the gender binary.  That said, here are a few of my thoughts (and attempted justifications) on the specifics:

Finally, the similies.  At first I was going to leave the similies in, of which, Britney provides three:

However, in addition to all this blowing up the exponential outcomes of my circular dendrogram by incorporating multi-tiered categories like explosives and circus performers, there was a larger problem with Britney’s similies.

To start, Britney says she is “like” a performer…which, according to my ringleader rules above, would be a subcategory of “not a performer.”  YET, if there are two types of people in this world, entertainers and observers, and Britney is an entertainer, of which, all entertainers are performers, then we have a big problem.

Thus, due to Britney dividing by zero, I had to leave all the comedic potential in her similies off my chart.

So, without further ado, I present to you the 512 types of people in this world: 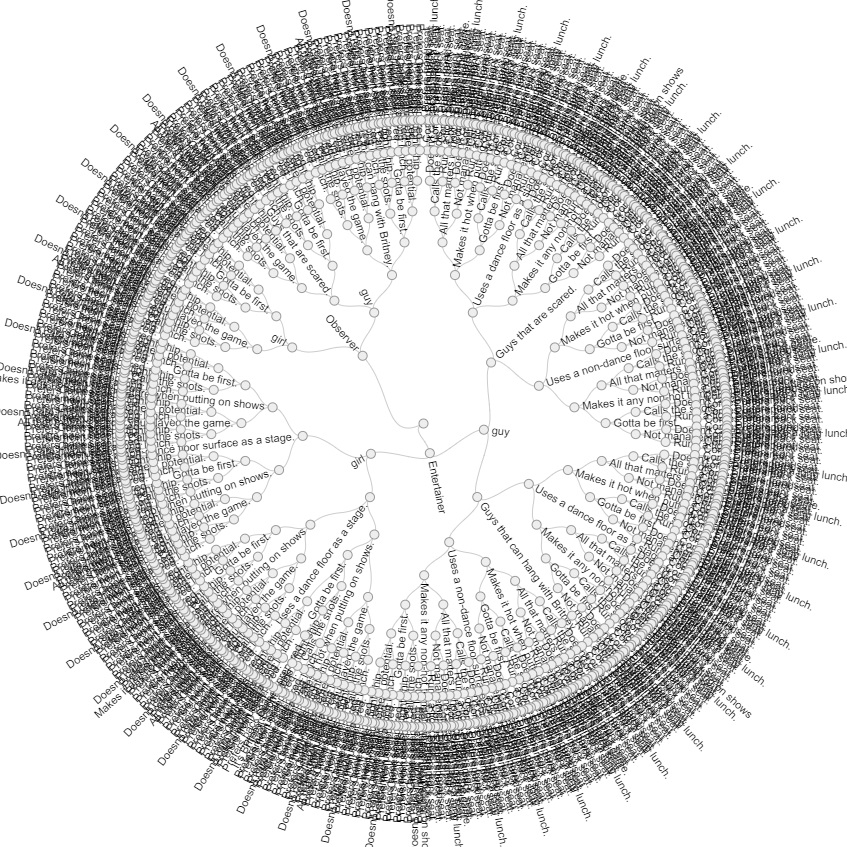 Oh wait, maybe I better blow that up (click to get the super-size version): 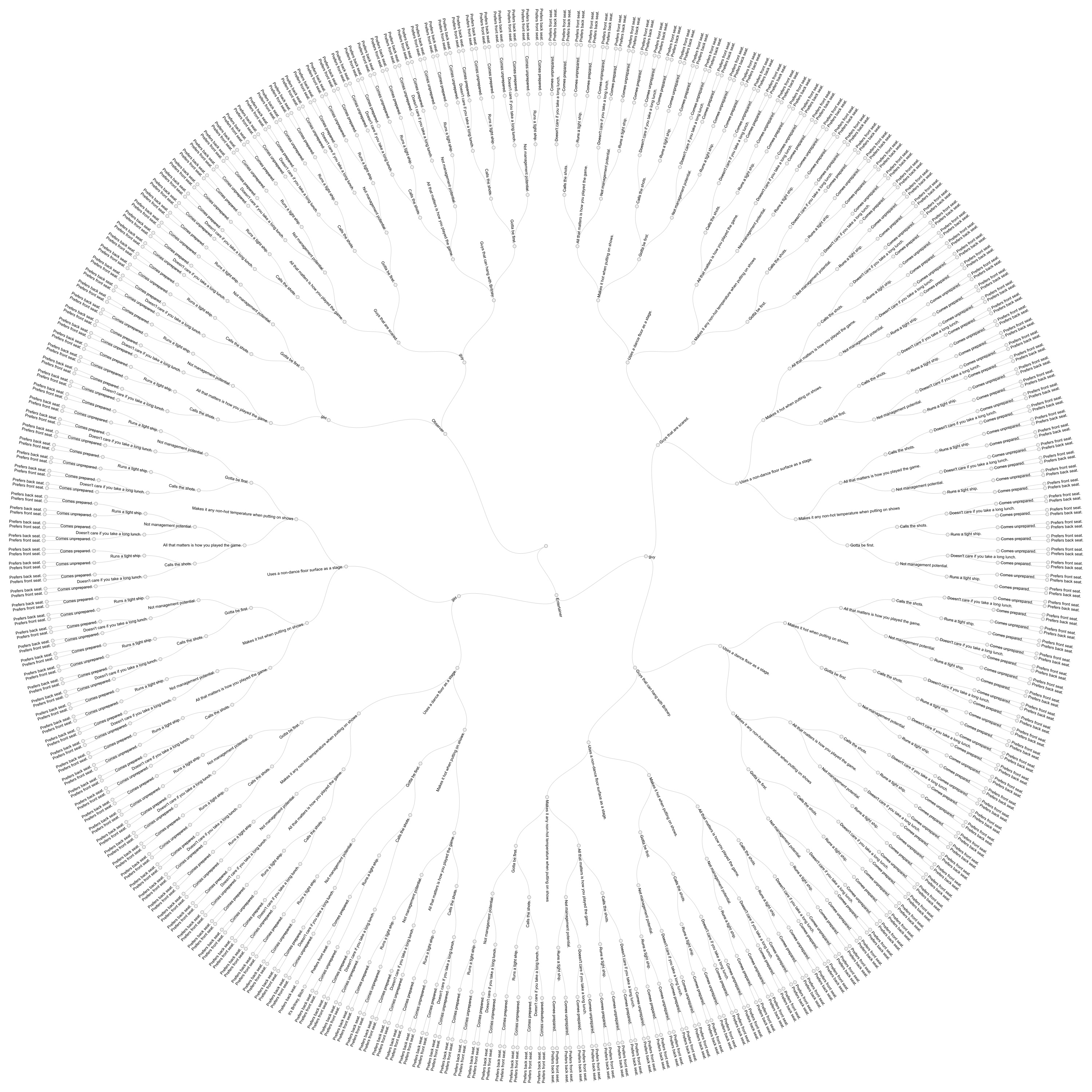 Ok, that one works a bit better…now see if you can find Britney yourself!

i forgot to tell you, you mean Euler diagrams.

True, but, 1.) my initial conception was to do a Venn diagram, so kept it with that terminology since it crashed and burned anyway and didn’t matter, and 2.) I don’t quite understand the difference enough to comfortably talk about Euler vs Venn diagrams.

There are only two types of people in the world: monsters and geniuses. I’m not sure which you are.