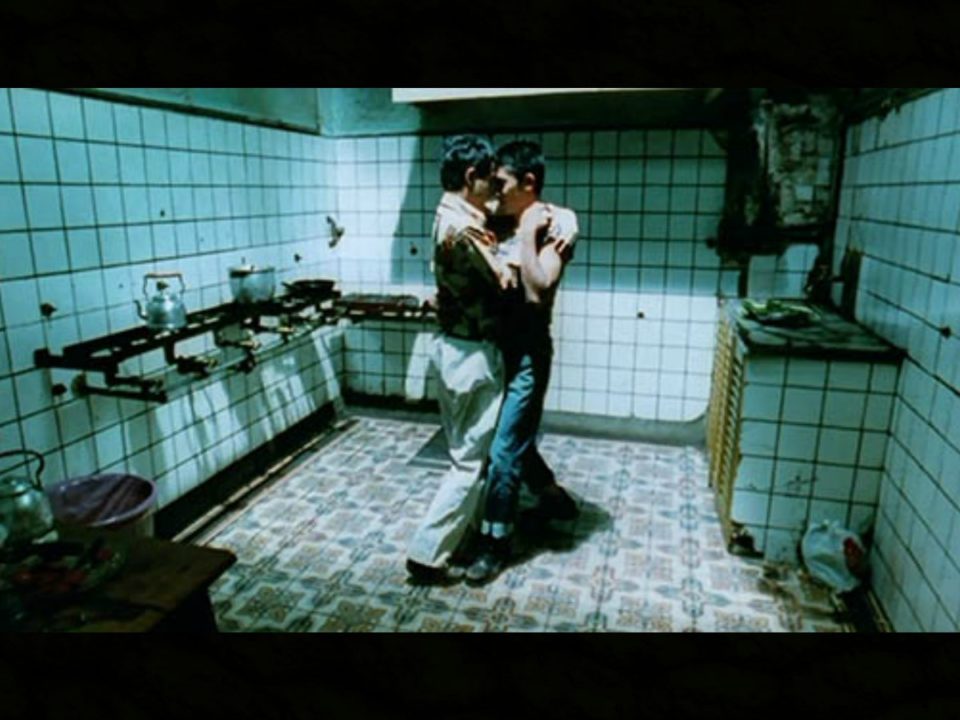 I don’t tend to like directors with flashy visuals.  I’m a Hawks and Rohmer man after all, for me, restrained stylistics are a sign of a master craftsman with nothing to prove.  At least that’s what I think until a director like Wong Kar-wai comes along and I realize I have to rethink my position.  I can’t think of another contemporary director who is as creative or as daring as Kar-wai.  Today’s movie, Happy Together, is an excellent bridge between the atomic bomb of cinematic pyrotechnics that was Kar-wai’s earlier film, Fallen Angels and the impossibly beautiful and moving follow-up, In the Mood for Love.

Happy Together tells the story of two lovers, Ho and Lai, who really should not be together.  Their relationship always seems to be a perpetual state of dissolution, or at least it is until Ho utters his dreaded words: “Let’s start over again.”  The film opens with the two of them breaking up after attempted to “start over again” in Argentina.  Lai  then tries to save money for his ticket back to Hong Kong by working as a doorman at a tango club while Ho turns to a lifestyle of turning tricks and self destruction.  Then, when one of his clients leaves him beaten and with broken hands, Lai finally breaks down and agrees to try to “start over again” one last time.

The title of the film quickly proves to be wishful thinking.  For the majority of this film, these two men are anything but “happy together.”  Ho is needy and manipulative while Lai is constantly pushing him away while letting his barely suppressed frustration at the state of their relationship occasionally boil through in fits of rage.  Lai’s coworker Chang comments that Lai must be in love since his voice always sounds so nice when he talks to Ho on the phone–but I’m not sure what conversation he overheard since the opposite seems to be true based on 90% of Lai’s interactions with Ho in Happy Together.

And yet, despite the nightmare of relationship strife that seems to characterize so many of their interactions, there are brief flashes of happiness.  And they are all the more heart-wrenching for their brevity.  Happy Together was supposedly released under the same title as Antonioni’s Blow-Up in Hong Kong, and the Antonioni themes of alienation are indeed strong in this film (though with a welcome human touch).  These two people want so desperately to have some kind of connection that when they somehow do break through to each other (as in the kitchen tango scene), it almost makes the weeks of misery that are sure to follow seem like a reasonable price to pay.

This is not a traditional movie love story, this feels real.  Much of it is due to Kar-wai’s daring creative process.  He never uses a script, instead the actors feel their way through the broad strokes of the movie.  I haven’t seen a movie since Stroszek that used such an off the cuff filmmaking process to such spectacular results.  When the actor who played Ho was forced to be called away during the shoot, Kar-wai created the character of Chang for Lai to develop a different kind of relationship with.  The movie is snippets of conversation, brief scenes of their lives filmed in a striking mixture of color and monochrome.  Interludes of Hong Kong (filmed upside down), and the ever present waterfalls that lovers secretly hope they will visit together someday (though they know they never will), are intercut throughout while another of Kar-wai’s brilliant soundtracks holds the whole thing together (including the greatest song ever written being prominently featured).  In fact, Piazzolla’s “Milonga for Three” is such a personally affecting song that I sometimes wonder how much of my appreciation for this film is due to the soundtrack.

The end result of such an organic method of creation is a film that feels, more than almost any other, like something close to truth.  The scene where Lai tells his sorrows to the tape recorder is one of the most honest gut punches you will see in cinema (aside from the even more powerful final scene of In the Mood for Love). These two men, it seems, can not simply be happy together.  But Kar-wai makes you understand why they try anyway.

I love this movie. That’s all.

Actually, I think Tango Apasionado might be the song you had in mind. Milonga for Three contains 3 songs, the last of which is an alternate of Tango Apasionado. When you said “the greatest song ever written” and “such a personally affecting song that I sometimes wonder how much of my appreciation for this film is due to the soundtrack”, I instantly thought of Tango Apasionado. After my first rewatch of Happy Together, I saw an MV of the movie to Tango Apasionado and realized how deeply the song made me “feel”/reexperience/reignite in me the movie, if that even makes sense. That’s when I felt exactly what you said about the song being a major and personal influence for you in regards to the movie. Anyway, since the past year, maybe cuz I’m just such a miserable guy, but Tango Apasionado’s been the greatest song ever for me.

Definitely agreed, though the song I’m thinking of is track 2 off the Rough Dancer, which is the version I like the best (no sax), and a more complete version than Tango Apasionado I think. Especially that piano line at 2:50…gotta be one of the greatest musical lines ever written: https://www.youtube.com/watch?v=0yJo9_SlsQM

I was thinking Tango Apasionado instead because it’s the song (Prologue and Epilogue) that is played repeatedly throughout the movie, but I see what you mean and Milonga for Three in its totality (even if in separate parts) is played through in the movie.

Hah, what a coincidence. I was just listening to Tango Apasionado today when I noticed (for some reason just today despite having listened to the song like a million times already) how a majestic an opening it had, particularly the piano.