How to make a homemade David Wooderson Halloween costume from Dazed and Confused. 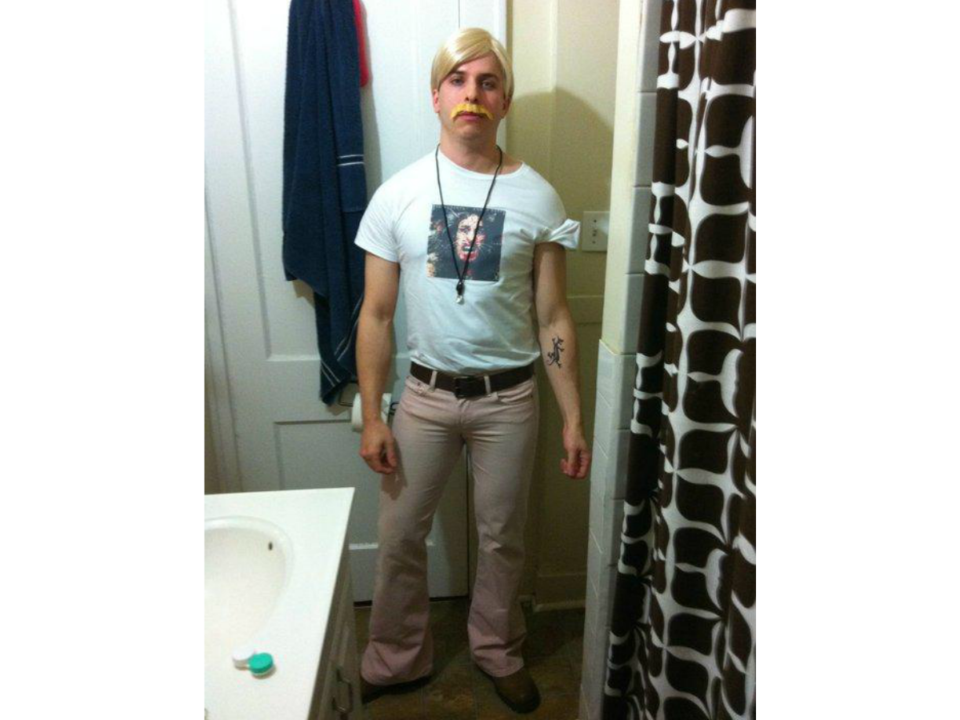 Every month I pretend to get reader mail in a little feature called “Mailbag Monday.” Well, this month, I’ve actually gotten REAL reader mail! Specifically, there are a handful of internet users out there that would like advice on creating a “Wooderson” costume from Dazed and Confused. If you don’t immediately know who that is, shame on you. Wooderson is, of course, Mathew Mcconaughey’s breakout role in what is perhaps the greatest film of the 1990s, Dazed and Confused. You know the character, “All right, all right, all right,” and, “I get older, they stay the same age,” and, “heyeyeye…watch the leather man…ehahaheaahea!” That’s right, this magnificent bastard: 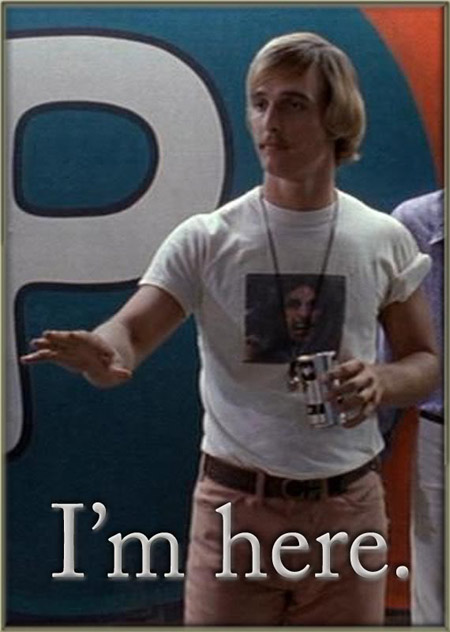 Now, if you want to make your own “future member of a sex offender registry” costume, I figured I’d go ahead and share my wisdom here!

First, let’s start with the shirt. Wooderson’s shirt is a cover of Ted Nugent’s 1974 album “Tooth, Fang and Claw.” All you will need is a white T-shirt and a sheet of iron on printer paper…print the picture and iron it on to your shirt! Here is a high quality jpeg of the album cover (just click on the picture to get the high quality large version): 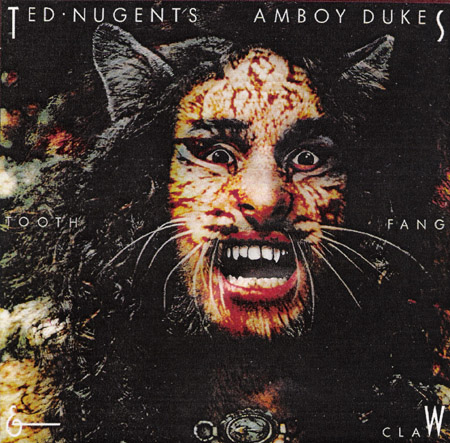 Don’t forget Wooderson always kept a pack of smokes rolled up in his left shirt sleeve. If you don’t have a pack of cigarettes handy, you can just use your favorite deck of Magic: The Gathering cards like I did instead!

As for the necklace, sadly I don’t have the one I made for last year still. Just remember, his necklace is a silver and black pipe and improvise accordingly. I used a black shoestring, a screw with a curved hook on the end, aluminum foil and electrical tape. I’m talking about an appropriately sized version of this kind of a screw:

Just shape the foil around the hook until it looks like a pipe, wrap the stem and the ends of the shoe lace in electrical tape and you’ll have the necklace!

Wooderson’s tattoo is hard to see in the movie, but this production still has a pretty good shot of it: 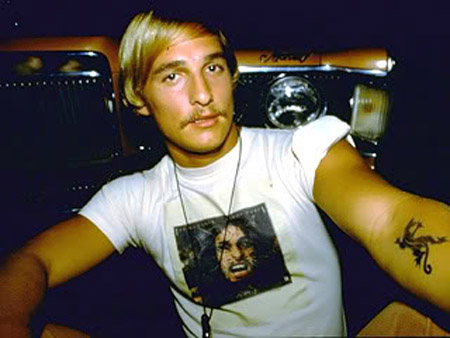 It’s some kind of lizard/dragon thing. I just drew mine on my arm with a permanent marker…it actually worked pretty well since it’s a pretty simple shape.

You can purchase the wig I bought HERE.

Don’t pay attention to the single one star review, the wig was pretty decent really considering the price. Also, if you have cats, don’t leave the wig out where they can get at it. They will lose their damn minds.

You can purchase the mustache I bought HERE (or, again, any Halloween supply store really).

An important note on the mustache: get spirit gum! You can order it online, or get it at one of those Halloween stores. I used the double sided tape that came with the mustache and it fell off all night. It was lame.

As long as you are going as “early movie Wooderson,” before he untucked his shirt and tucked his jeans into his boots, you don’t have to worry about the boots too much. Mine aren’t the same ones he wore, but they are close enough. And get a brown belt to match!

Finally, Wooderson’s famous salmon pants. This was probably the most problematic area of my costume. I got mine on ebay, which had almost no pink/salmon pants until I started looking at women’s jeans as well. Since I wear a 32 (which is too loose on my waist but fits my thighs) I figured I’d want like a 30 or so to mimic Wooderson’s “tight pants” look. The internet told me a men’s 30 is a women’s size 9. What the internet didn’t tell me was that a women’s size 9 is not the same as a women’s “junior’s” size 9 which is what the pink pants I ordered turned out to be. I probably shouldn’t post this online, but let it be a cautionary tale for all you lady-pants buyers out there: 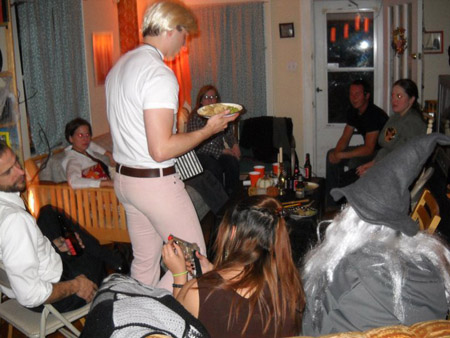 I also quickly learned that pantyline was a serious problem. I initially tried solve the visible pantyline issue by wearing them without underwear, but that just made the front look like someone had stuffed a spandex leotard full of mushrooms. I figured that I was already subjecting people to enough horribleness with the back view; no one needed the front view to be even worse. I managed to get my shit in order in the front by buying a pair of bikini style underwear and cutting the elastic banding off of the back and the legs on the bottom in order to avoid, as they say in Annie Hall, VPL.

So, with the pants, don’t wait till the last minute and be forced to wear the sausage casings that will inevitably come in the mail the day before Halloween. Also, there is no way you are a size 9.

Awesome! Thanks for the info!

I don’t know Jessica, that seem like an awfully personal thing for me to answer on the internet.

Um…”they get older, I stay the same age”!?! Seriously Isley, you are slipping.

Haha…crap, guess that was a Freudian slip…I just edited it back to the correct quote. But, you know what they say in Friday…”The older the berry, the sweeter the juice.”

I showed Mike this post a few minutes ago. He’s still laughing.

I want to make the same costume. Do you still have those pants? If so, could I buy them from you?

I’m afraid I threw the pants out. I’m sure you could find a similar pair on ebay though. Or, if you just liked what you saw in this post, I could just send you an autographed picture of my ass in those pants for a small fee.

This is great, I bought mens white jeans online, then used the ret? not sure on the name but its clothing dye. I put the jeans in for 2 minutes, they were too red. I bleached them once and they came out perfect.

…then I read to the very end (I’ve a thing for dressing up as movie/TV characters on a daily basis for kicks, not just for Halloween) and I feel your pain on tiny ass pants. I shop mens despite being female-gendered and our jeans are awful. Pockets are for show and even fi you get the right size, good luck sitting or bending without ripping a seam (and I’m tiny, so women’s jeans just suck in general).