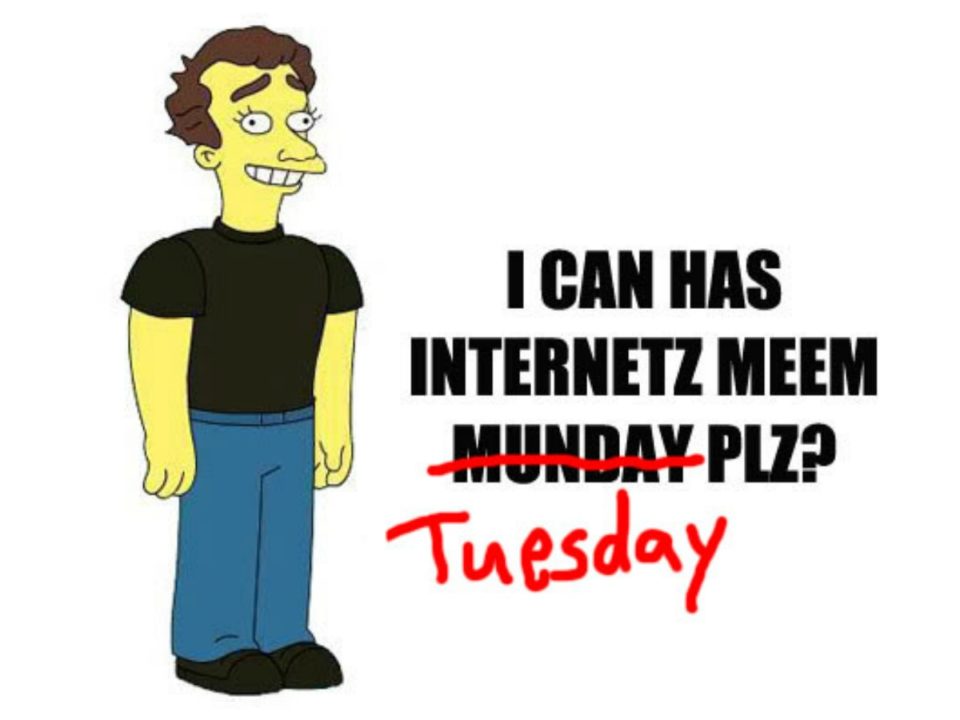 I’ve been meaning to bring Internet Meme Monday back in some form for a while now.  I mean, after all, there will always be new memes, and thus I’ll always want to jump on the bandwagon and make my own versions of jokes that become tired after the first few hours of online existence.  So from now on I’ll be posting a new IMM post pretty much whenever I feel like it.  Sooo….

On the agenda this month?  I attempt to exhaust a meme before it even starts!

Earlier today my buddy David was explaining the strange and mysterious world of “sports” to me and brought to my attention a professional football player named Ndamukong Suh who recently stomped another player during a game on Thanksgiving day.  David was like “you know, it would be funny to make a picture of him stomping like a baby seal or something…actually how do you even start a meme like that?”

Well David, that is exactly how you start a meme like that.

You take a picture that is currently circulating the internet: 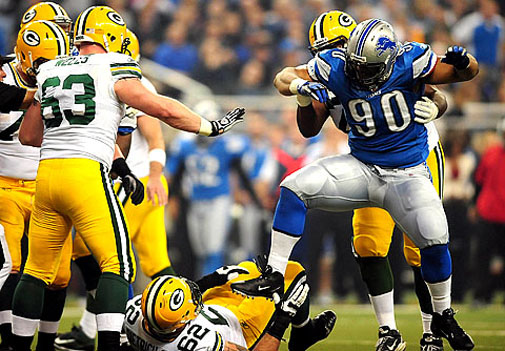 Add your idea via photoshop and WHAM, an internet meme is born: 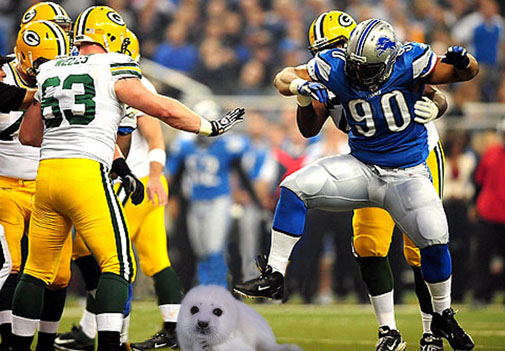 Of course, it isn’t really a meme if no one sees it, so unless you are a superuser on one of those “armpit of the internet” sites like 4chan, all your hard work and cleverness will most likely be for naught.  Still, how about we take a shot at running this meme into the ground anyway?

First step in putting your newly created meme to use is to see if anyone has already thought of it.  Importantly, you need to do this step AFTER you make your image in order to keep your personal pride intact.  That way you can pull an Isaac Newton on your meme if it turns out someone has already thought of it: “well, I arrived at my meme independently, and my version is better anyway.”

And, as it turned out, “Suh stomping cute things” was indeed already on the internet before David told me his idea this morning: 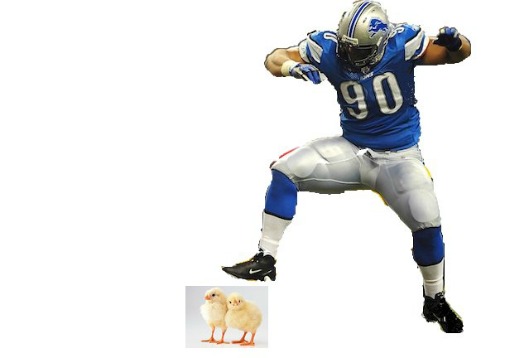 The above picture was taken from THIS POST (posted over three days before David’s seal idea).  However, thankfully for David, baby seals are funnier and cuter than any of the things in that post.  Also, David managed to get someone who knew how to use “refine edge” in photoshop (and who actually took the time to cut out his baby seal and clone the stomped football player out of the picture) to make his picture, so, all things being equal, I think we’re safe to proceed with our meme.

Now, the first (and most obvious) thing you need to do in your quest to overuse your new meme is to add other memes to it.  I only knew of one other football related meme, the “Tebowing” meme.  I guess Tebow is a football player that likes to pray, and fans make fun of him for it because, you know, people look stupid when they are praying.  So here we have Tebow Tebowing for the life of that baby seal: 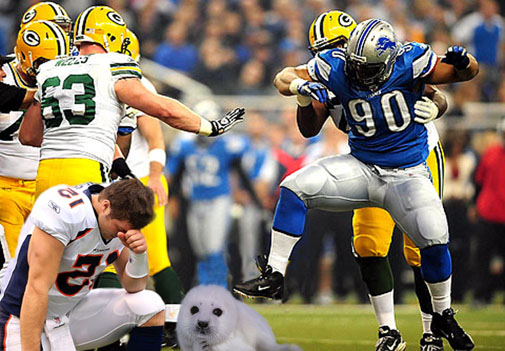 Of course, you have to be careful about combining memes, it always starts out amusing but can quickly become “so 2010”: 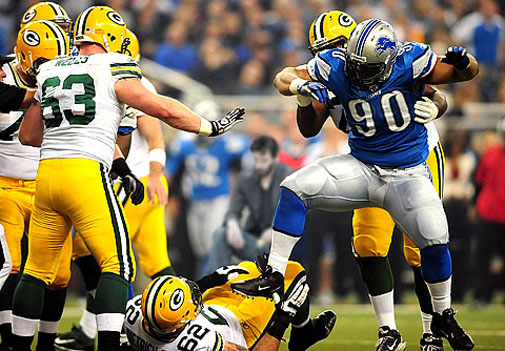 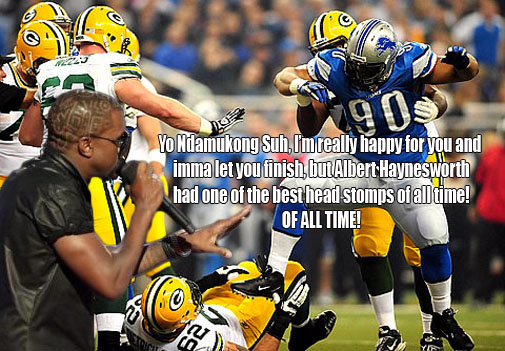 What? I did some sports research…you can’t just pull these memes out of nothing.

Even newer memes can become annoying through their popularity: 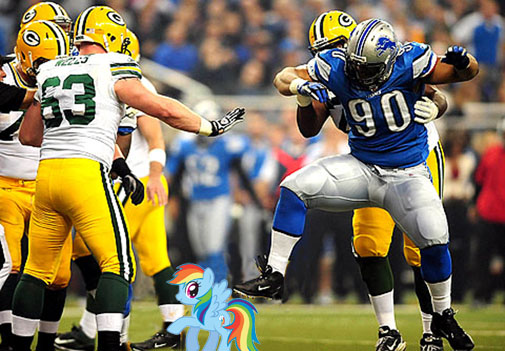 Of course, part of the problem in this case is that the whole “bronie” (dudes who have an unnatural love for My Little Ponies) thing is lame anyway.

No matter how it happens, if you find yourself stuck in a postmodern K-hole of referencing other memes, you’ll have to do the unthinkable and come up with something original to get out of it.  The best way to do this is to try to find non obvious ways to add things to your picture.  For instance, perhaps Suh was just trying to help the player get rid of that giant tarantula that had crawled onto him: 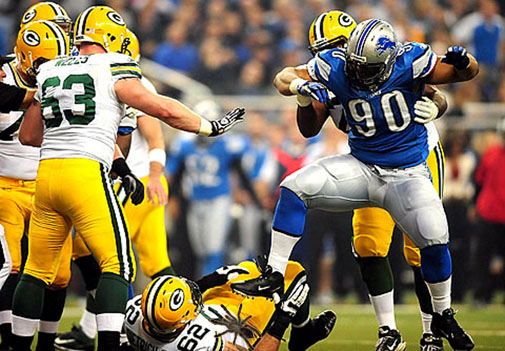 At this point your meme has passed the postmodern stage of referencing other memes and is approaching critical mass by exhausting the last of the moderately funny possibilities of your picture.

Usually, by this time, you can’t do much more other than to realize that no one has made the picture black and white yet and use that to pull in an old tyme baseball reference: 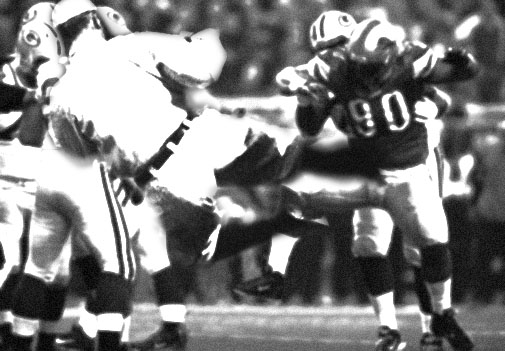 At the point where you have to explain that that is Ty Cobb is because you got lazy and your photoshop was too shitty to tell what was going on it is time to face the hard facts.  You have to admit to yourself that you are out of ideas.  You kind of have to put the meme to rest now, because, at this point, the only other thing you can do is to make a Hitler Downfall parody video out of it…and, like, really, that is “so 2007.”

So, sorry David, I didn’t mean to overuse your meme idea before it had a chance to really take off, but, as has been said many times in the past: “Isley is the reason we can’t have nice things.”  And don’t any of you forget it: all your memes are belong to me.  Yes, yes, I realize that that was “so 2000.”

My favorite combination would be Suh stomping the baby seal with Sad Keanu in the background.

Perfect, my friend! Love the Tebow one!

I was also super into this.