Internet Meme Monday 7: Where is your God now?

On the agenda this month?  I try to come up with “Where is your God now?” pictures without offending “a lot of my best friends”.

In most situations, asking someone “Where is your God now?” is not a very nice thing to do.  All the way back in the bible (Micah 7:10), the prophet Micah thought fondly of his day of reckoning and what would happen (in brutal old testament style) to all the people who had asked him that question:

Then my enemy will see, and shame will cover her who said to me, “Where is the LORD your God?” My eyes will look on her; at that time she will be trampled down like mire of the streets.

But if mocking religious people when the cruel nature of the real world rears its ugly head is your thing, you really can’t beat the question “Where is your God now?”  In fact, the phrase proved so resilient that it turned into an internet meme five years ago.  The basic idea is as follows: find a nonsensical or horrifying picture, then add the phrase to it in a good LOLCAT font (I usually go with Impact LTD).

There are a lot of good ones out there, usually the joke hinges on adding the phrase to a representation of an easily explainable pseudo-paradox, or something just completely bizarre.

Anyway, I thought I’d try my hand at a few of these today, so let’s get to it! 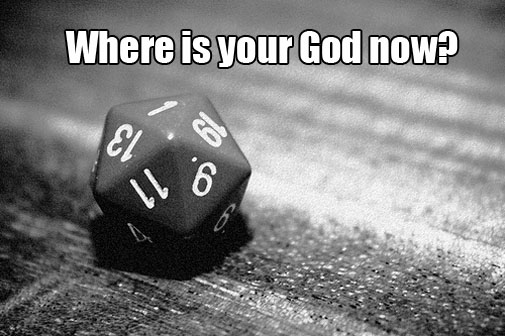 I still remember the time we were fighting that pack of dire wolves that had attacked our campground in the middle of the night.  I had passed a climb check get my hobbit ass up the nearest tree (yes, I always play a halfling thief), passed a use rope check to fashion a zipline with my 50 feet of silk rope and modified crossbow, even passed a very high DC acrobatics check to slide down the zipline and fire a hand crossbow one handed for a sneak attack on the lead wolf as I passed behind him.  After all that, I rolled the attack…a 1.  Critical miss, I accidentally shot my own zipline, took falling damage and then got bitten by a wolf.

I’m not a religious man, but I definitely wouldn’t have been one after that happened. 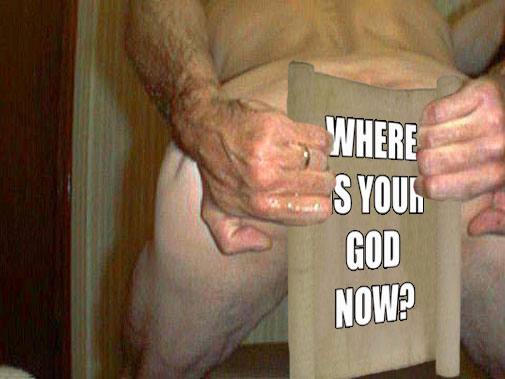 Like most people, I remember my first goase very well.  It was freshman year of college, and I had just recieved an innocent im telling me to check out this www.goatse.cx site that had a good article on the Mines of Moria.  I excitedly clicked the link to find, not the bottomless pit of Khazad-Dûm, but rather the bottomless pit of some married dude’s asshole.  If you want to get a sense of how absurd and meaningless this world is, just spend a few seconds staring into the horrifying depths of that guy’s lower intestine.

The website www.goatse.cx has apparently been taken down, but if anyone really wants to see the original goatse picture, click go here:

Link your friends, they’ll love it!

I thought about fake hyperlinking to the original goatse picture, but then I figured if I goatsed my readers no one would ever click another one of my links ever again.  Regardless, I’m not satisfied with the self censored version, I really think it works much better like…

E to the pi i equals negative one 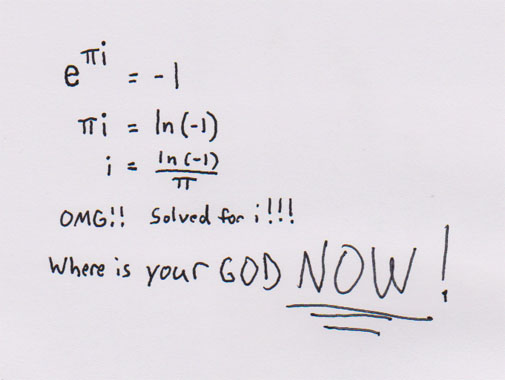 I’ve always loved this equation.  I mean I don’t really know any applications or why it exists, but it looks like someone just took my two favorite transcendental numbers, added an imaginary number, mixed them all up and it somehow came out to negative one!

Anyway, it has been a long standing HILARIOUS joke of mine to ask “why not just solve for i?” Of course, I guess that’s like building the plane out of the black box…it just doesn’t work.  So yes, I realize there is no power you can raise 2.718… to to make it come out to -1.  But, whatever, I still totally solved for i.  Imaginary my ass. 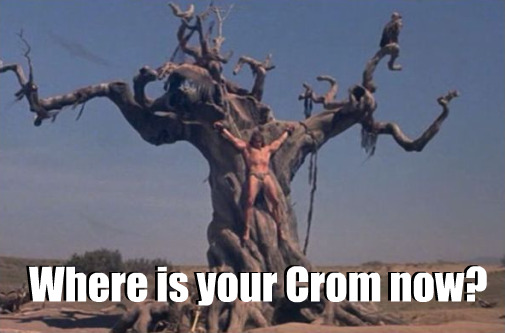 Maybe if Conan had the tongue to pray to Crom a bit more often he wouldn’t keep finding himself in these situations! 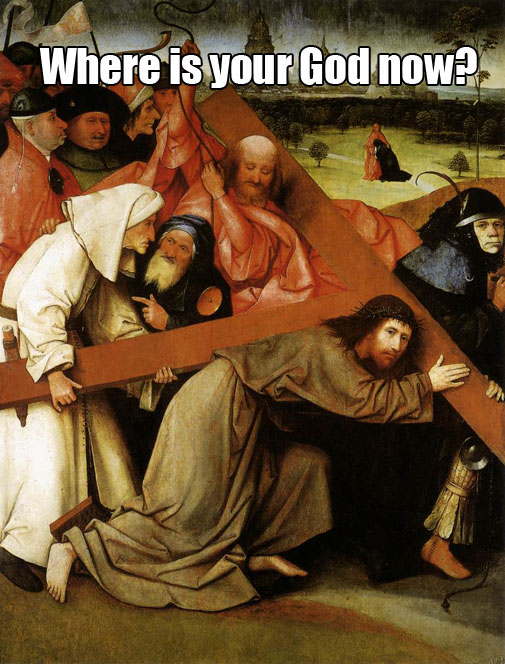 Speaking of Gods, crucifixions and missing the point…  Hey don’t blame me, I’m just paraphrasing a rather freaked out Jesus (you know, the early Mathew/Mark style as opposed to the later, more stoic Luke Jesus).  I might not question His existence, but if I were Jesus I’d at least feel a little betrayed by Dad…even if He did end up bailing my Ass out in the end after all! 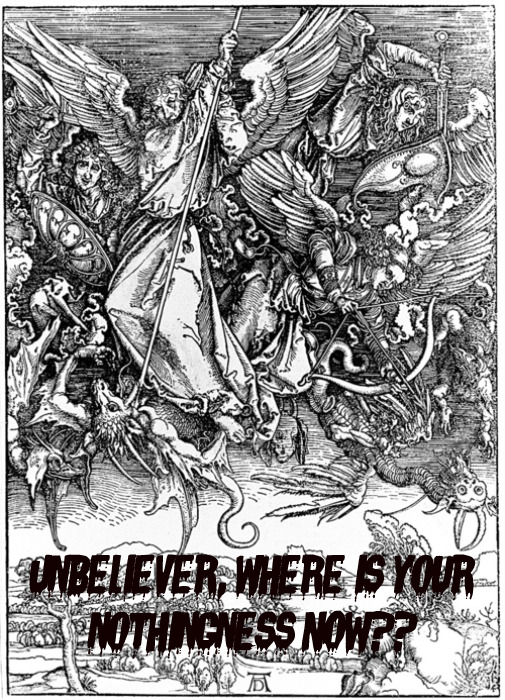 [late edit: Nadine commented that she wasn’t offended by any of these.  So I hope this smiting does the trick Nadine!]

I’m offended that none of these offended me.

I know what lies there and I will not go.

If I’ve ever seen anything that qualified as evidence of a higher intelligence, it’s the fact that the equation
e^{i pi} + 1 = 0
holds. On the other hand, this just says that 180 degree rotation is the same as reflection through the origin, which is pretty unremarkable. Where is my god now?!?!

Ooh…did you click it at work? I should have clarified, nsfw.

Hmm…so are e and pi both derived in similar ways? I may have to have you explain all that to me some time.

Agreed on mathematics being as close to a higher power as I’ve ever been. That infinity shit? Blows my mind!