A brief look into why John Wayne was so awesome. 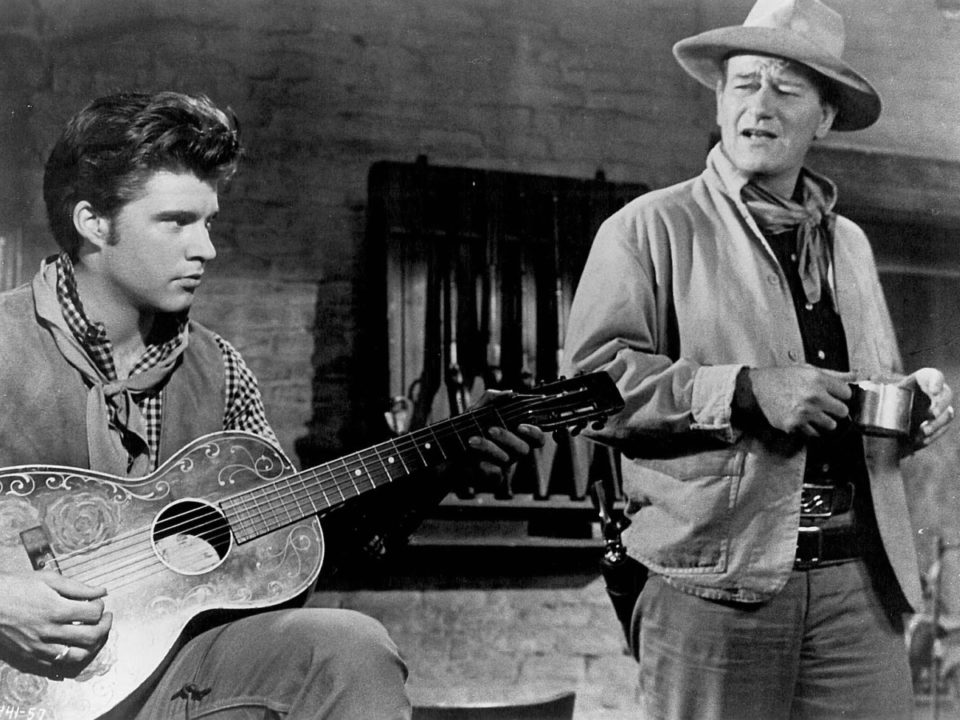 To start with, I’ll admit that John Wayne didn’t have a great range, and most of his roles were just variations on the persona he created for himself. But honestly I can’t think of anyone that has greater “charisma”/”screen presence” than John Wayne (though Cary Grant comes to mind).

Now, when I say he was a great actor, I just mean that he was absolutely convincing doing what he did (maybe less so when he was playing Genghis Kahn, or a Roman centurion…though I’ll admit I haven’t seen those movies).

I won’t go on too much, but one example is from Rio Bravo (which could easily go into my top five movies list, so go see it! Might be Howard Hawk’s best film, and that is saying a LOT). In Rio Bravo, John Wayne allies himself with Dean Martin and teen pop singer Ricky Nelson. Dean’s performance is decent, but Ricky’s is pretty wooden (not as awful as some will have you believe, just not quite there). Now, in any other movie, that would really stand out. But in Rio Bravo, John Wayne’s character respects and believes in Ricky Nelson, and he is so good at portraying this that the viewer doesn’t question Ricky’s performance. If John Wayne thinks Ricky really is great with those guns and trusts him to have is back then gawrd dammit, so do I!

So, not only is John Wayne’s performance so strong that we without question believe in his character, but we also believe that he believes in Ricky Nelson’s character, and thus he actually elevates Ricky Nelson’s performance. I can’t think of many actors who are so utterly convincing that they elevate the performances of the people around them just by being on screen.

It is is a very different performance than, for example, Brando in Streetcar Named Desire. The movie is full of great performances, but whenever Brando is on screen, he is so amazingly good that he is the only one you can focus on. His acting is so good he actually makes the other actors look bad. John Wayne has a very different (and no less impressive) stylehe is the nucleus that holds the entire picture together

Anyway, that is one (of many) reason why I’m always going on and on about the Duke.

Oh, and go see Rio Bravo if you haven’t! Just talking about it is making Stagecoach’s #5 spot on my top five list very precarious. Rio Bravo just takes its time and tells its story (though like most Hawks films, a LOT happens). When the movie pauses briefly so Dino and Ricky can sing a song (with Walter Brennan (as “Stumpy”…his best role ever!) on harmonica, and John Wayne standing nearby with a cup of coffee and a big dumb grin on his face) you can’t imagine there would be a better thing to put into the movie right there.