Lord of the Rings, The Lost Chapters I: A Wind from the West 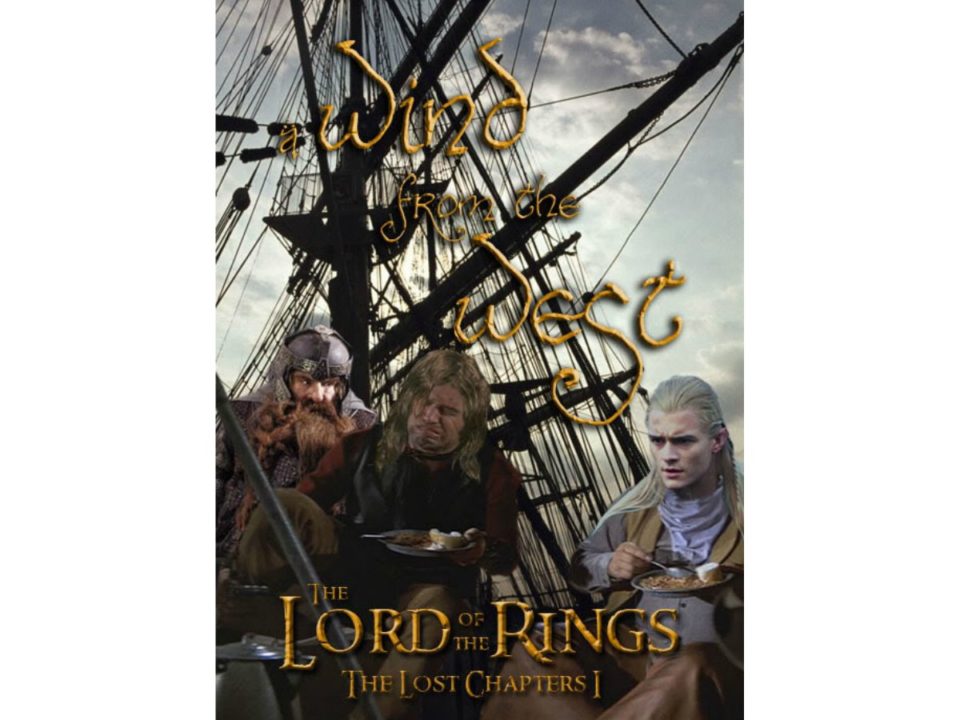 The fantasy fiction community was rocked last month when previously unreleased sections of The Lord of the Rings were discovered. This “grail” of a literary find amounted to a lost chapter, “A Wind from the West” that had apparently been cut out of the original manuscript by censors. Years of suppression by the Tolkien estate followed, but the wait for this lost chapter is finally over!

The bulk of the writing takes place after Aragorn, Gimli, Legolas and various other minor characters passed through the halls of the dead in order to rouse the undead army of soldiers who had broken an oath of fealty to Isildur long in the past. It would have been included between chapter 3, “The Muster of Rohan” and chapter 4, “The Siege of Gondor” in The Return of the King for those of you that want to print this out and staple it into your copies of the book.

Following the lost chapter I have posted two smaller fragments that were also cut out due to continuity problems arising from the chapter’s removal. Notes as to their placement in the text precede the fragments.

For days the Grey Company had toiled up the mighty Anduin and into the darkness from whence it flowed. It seemed like so long ago that they had passed through a mountain with an army of restless spirits in their wake. The wrath of the dead king and his legions had been terrible to behold as they descended upon the plains of Lamedon. Quickly and without mercy had the masses of Corsairs from the Havens of Umbar to the far South been driven into the sea.

With the Corsair’s army broken and their ships forfeit, the Oath-breakers trust been fulfilled. As softly as a black mist before the wind the spirits passed into the night from whence they came. Thus did the Grey Company finally come to the Southern Fiefs where they did raise a great valor of folk to man the Corsair ships on their way to Minas Tirith’s aid.

Ever since they had toiled at the oars of their enemy’s ships, setting their backs against the strong current of the Anduin. It seemed the very air around them conspired to keep them from coming to the succor of Gondor. With each oar stroke the fell black clouds that had only recently begun to boil out of the East grew thicker.

With an oath, Gimli cast down his oar. ‘Curse this foul darkness, will dawn never come?’

‘This is no natural darkness,’ said Aragorn from the prow. ‘The cursed hand of Sauron churns these clouds. If we fail I fear the dawn shall never come. But though times are dark, we must not lose hope. On and on, ever on shall we row to the aid of Gondor!’

‘Through day and night have we toiled at these oars,’ said Halbarad, Captain of the Dúnedain. ‘Let us drop our anchors for a few precious moments to rest our weary backs and fill our empty stomachs!’

‘Halbarad speaks the truth’ said Legolas, ‘I fear my dwarven friend will not again rise from where he sits if we do not stop to eat soon!’

‘Aye Legolas Greenleaf, my belly does sound its displeasure, but I would sooner eat nothing again for the rest of my days than eat the foul food of the cursed Corsairs of Umbar!’

The grey company had eaten the last of their Lembas and were left with only the provisions of the Corsair ships to feed themselves and their army. Yet Gimli’s tongue belied his body’s hunger, and the preparations were made to drop anchor for a quick repast.

The food of the swarthy Corsairs proved to be no easy fare. Strange brown fruit like small berries with a thin skin, a red liquid that burned as the fire of a forge and a coarse bread, thinly baked and brittle yet hard as wood were just a few of the oddities that lined the black ship’s larder .

Many a man of the Grey Company cursed as the hard thin bread dug itself into their palate and between their teeth; or as the red liquid would accidentally splash into their eyes. But the brown fruits known only as Bæns did carry with them a far more grievous affliction.

Moments into their meal Gimli suddenly stood up with a start. ‘By Mazurbul’s beard, that be a stench that sears the very hair upon my face. Did that come from your direction my elf friend?’

‘It was not me, Gimli son of Glóin,’ replied Legolas. ‘Surely you can not claim to have heard even the slightest sound issue from my hind-quarters?’

Aragorn, with the voice of one who has seen much and was wise beyond his age thought for a while and then spoke, ‘In my years traveling the vast lands of middle earth, it has been said that often such issuances be silent, and yet still carry with them the deadly vapors of an warg’s den on a summer day.’

‘Indeed, and it is many a Dwarf who knows the saying ‘He that gives cause to deny is most oft the one who has seen fit to supply’ said Gimli.

‘Aye dwarf, but we elves too have a saying’ countered Elrohir, son of Elrond, speaking quickly to defend his kinsman. ‘It goes thus: “Adon minya onlammen na adon echrom”

‘The man who first spoke is the man who sounded the trumpet,’ murmured Aragorn.

Gimli’s face darkened. Turning to Legolas he began to speak when a sudden violent explosion issued from his backside the force of which caught the unsuspecting Elrohir’s face in its full fury.

‘That was a poor showing dwarf! My brother had not the time to shut his mouth in the face of that unsuspected broadside,’ muttered Elladan. ‘Surely you will not shift the blame of that transgression onto good Legolas as well?’

‘Yes, that one was mine fair and true,’ replied Gimli, ‘but I think the elf knows who–‘

Gimli was suddenly interrupted by a new explosion whose force threatened to panic the horses in their pin on the deck. All eyes turned to Aragorn, son of Arathorn, Elessar, Isildur’s heir. Speaking slowly in short breaths, he said, ‘it seems this food of the Corsairs is a most musical fruit. I fear that the more we eat…the worse this shall become.’ But his words were far too late. By then the hindside of every man on the ship was resounding with the sounds of the venomous Bæn emissions.

Gasping, Gimli shouted above the cacophony, ‘It was bad enough we had no wind for the sails, but now it seems that eating our enemy’s food in such circumstances will be our undoing!’

At that moment, the dour-handed Halbarad leapt to his feet. ‘All is not lost dear Gimli, can you not feel it? A wind from the West! It fills our sails and carries our issuances away! Let us change our armor and be off!

Striding to the prow with his face covered by the jeweled flag of Elendil, Aragorn thought to himself. ‘Truly this wind is a two-fold blessing. Would that it continue both until we reach our destination and after the morrow’s constitutional whichever may come first!’

And so the Black fleet of the Corsairs sped up the river Anduin. The forces of Mordor laying siege to the white city of Gondor knew not what awaited them upon the arrival of the Grey Company.

Fragment #1 – To be added to the end of the chapter “The Siege of Gondor” when the captain of the Nazgul confronts Gandalf at the gates of Minas Tirith. Original text included in bold for context.

‘Old fool!’ he said. ‘Old fool! This is my hour. Do you not know Death when you see it? Die now and curse in vain!’ And with that he lifted high his sword and flames ran down the blade.

Scarcely had the blade begun its descent toward Gandalf than the Black Captain of the Nazgul received a shock so great it caused even one of his immense power to stay his hand. ‘I had thought you a cheap conjurer old man! But this is a spell that sears far deeper than your puny flame of Anor! What manner of magic could cause such an odor?’

His eyes burning and stomach heaving, Gandalf did not move. And in that very moment, away behind in some courtyard of the City, a cock crowed. Shrill and clear he crowed, reckoning nothing of wizardry or war, welcoming only the morning that in the sky far above the shadows of death was coming with the dawn.

And as if in answer there came from far away another note. Horns, horns, horns. In dark Mindolluin’s sides they dimly echoed. Great horns of the North wildly blowing. Rohan had come at last.

Fragment #2 – To be added to the end of the chapter “The Ride of the Rohirrim” when Merry and the Rohirrim prepare to join the Battle of the Pelennor Fields. Original text included in bold for context.

‘Then suddenly Merry felt it at last, beyond doubt: a change. Wind was in his face! Light was glimmering. Far, far away in the south, the clouds could be dimly seen as remote grey shapes, rolling up, drifting: morning lay beyond them.

Then, without warning, a foul stench assailed his nostrils. ‘What devilry is this!’ thought poor Merry. ‘Has the west fallen to the dark lord? Tis a queer smell this, and surely not one born of human making! Burying his face in his small hobbit tunic he grabbed tighter to Elfhelm, steeling himself once more to the battle at hand.

Well, I guess we can hand it to Tolkien’s editor then, can’t we?

I though elves farted moonbeams and fairy dust? 🙂

If the elves have a saying for “whoever smelt it dealt it” in their language, I’d say they fart something more than moonbeams and fairy dust…