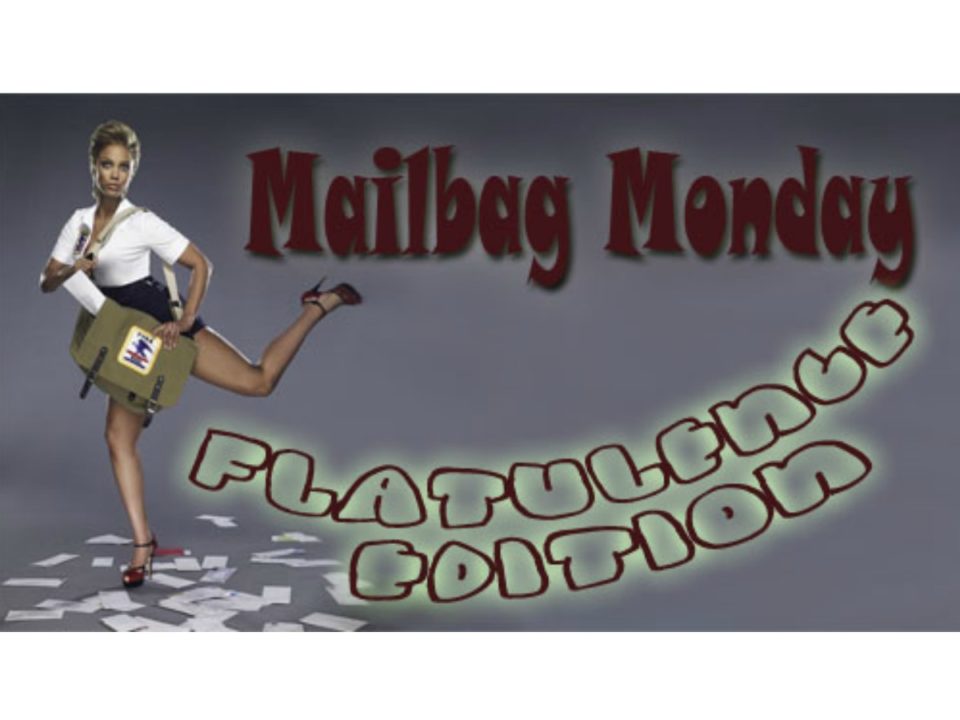 After last month’s “Does Isley look fart in these pants” query there was a massive influx of fart related questions, so many that I decided to make a very special GIANT SIZED “All Flatulence” edition of Mailbag Monday!

Yeah, this sounds about right, after all, in the immortal words of Eddie Murphy, “your father introduce you to [the fart game]”.  So I wouldn’t call SRS just yet.

But instead of just quoting Eddie Murphy for every question, I’ll go ahead and post the full video here:

Ok, got it out of my system (no pun intended).  Just keep in mind, everything Eddie says applies to the rest of the post.

Fig Newton farts are the worst?

I really can’t say I’ve found this to be the case.  And as someone who routinely eats “the whole goddamn bag” of Fig Newtons in one sitting, I would know.

I really don’t know if SBDs are by nature more potent than L(oud)BDs.  However, the “surprise!” factor probably tips the odds in their favor.

Did you forget to include punctuation here?  Because if you meant: “Brother, powerful farts!”, then yes, I’ve been there too!  Otherwise, the only possible explanation I could think of is that you might be referring to my old Spirit of the Century Pulp Role Playing Game monk character “Brother Powerful” and his “Holy Wind” ability.  I’ve drawn a quick sketch of my character concept here: 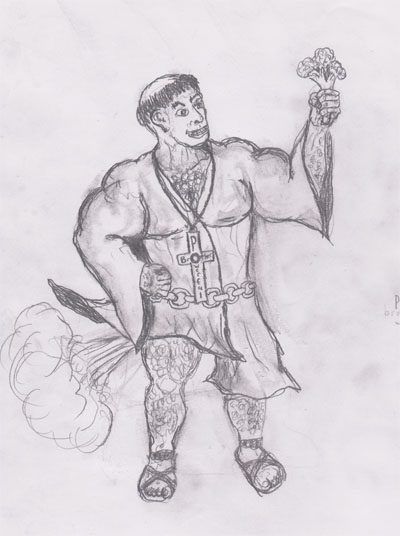 But I doubt you were referring to him.

Best fart of all time?

Sadly, they’ve all been downhill after the #1 HERE.

Ah yes, this is a classic trick.  Save a particularly foul fart for a car trip.  If it is the summer, suggest rolling up the windows and turning the AC on (if it is the winter you should be set).  Then, and this is VERY important, do not say anything until someone ELSE smells your fart (unless you say something like “do you smell something burning?” in order to get them to take a big sniff).  At this point proceed to laugh hysterically while pushing “up” on your automatic window button so the fart has to exit the car through the window next to the driver (or turn the child lock on if you are fortunate enough to be the driver).

Anyone who eats that many breakfasts is probably going to fart up a storm (especially if they follow an English diet as they seem to in the books).  However, they are just little fellas, so I can’t image they can produce any emissions with real staying power.

I was only bad at farts that one time, and I was sick with food poisoning, so it was perfectly understandable!

I wouldn’t say I’ve ever “forgotten” forgotten to fart, but there have been plenty of times I wished I had a fart and I didn’t.  Like pretty much every time we played the parachute game in elementary school.  Also elevators.

An interesting corollary of my oft repeated claim of “When I fart, you’ll know it!” is that when I fart and you don’t know it, I won’t be quick to admit such a defeat.

If, by this, you mean I fart like a normal person who does fart, then yes, this is true.

“isley unruh” fart, but not out of butt?

I don’t care how bad that burp after “all you can eat wings and cheesecake” night was, I still maintain that it can’t be classified as a fart.

I would venture to guess that the art of farting and trying to get other people to smell it hasn’t changed much in the last 10,000 years.  So “modern fart” is a pretty meaningless phrase.  Sure, cavemen didn’t have “fig newton farts”, but we don’t have “month old mammoth carcass farts”, so I’d call it a wash (actually, I’d say that is “edge, cavemen”).

Now you just aren’t even trying.  Oh ok, fine, I giggled anyway.  The day is yours.

I’d say action movies are probably the best.  All those gunshots and explosions can really cover up some pretty spectacular farts that you might have been saving up for a sellout crowd on opening night at a theater.

“isley unruh” ever not fart during a movie?

Sure, plenty of times.  Usually it’s when I’m watching something artsy fartsy and Swedish…those fuckers don’t even use music half the time!  If you don’t have an SBD ready, be prepared to hold your farts for any Bergman film festivals you go to.

“isley unruh” fart to the top?

I am fairly certain you have that phrase wrong.  After all, I’d say it’s a pretty safe bet that no one in the history of “climbing the corporate ladder” has ever farted their way to the top.

I was going to say “only my own”, but then I realized, that like in Shawn of the Dead (“I’ll quit doing it when you quit laughing”), I laugh every time someone gets me with one too.  So, yeah, I guess I love all farts. Even that one Justin did at the Taco Bell drive-through.

I was going to say “only other people’s”, but then I realized, that like in Shawn of the Dead (“I’ll quit doing it when you quit laughing”), I laugh every time someone gets me with one too.  So, yeah, no, I guess I don’t hate any farts.  Not even that one Justin did at the Taco Bell drive through.

I really don’t think this is fair.  I mean, aside from this Mailbag Monday, my blog is full of a lot more than just fart jokes!  I mean, I have Lord of the Rings Fanfiction…er…about farting.  Uh…and…stories about my favorite farts.  Um…and…well… there’s also…Jock Blog.

Is this a reference to AT&Ts accusation of conference call tampering in 2002?  Because, they never proved that was me.

God, I wish.  That big sonofabitch could probably clear out an arena on a good day.

“isley unruh” fart in own mouth?

If I could project my farts like that, my mouth would be the last place I’d try to fart in.  Of course, the first place would probably still be “a jar” so I guess I don’t like to mess with the classics. 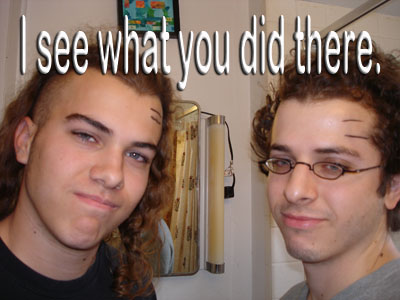 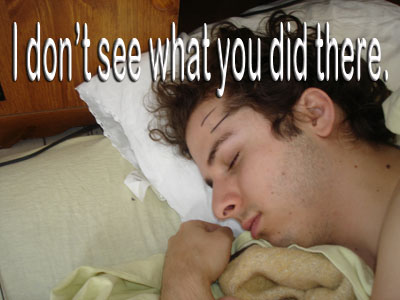 In fact, this brings up a point I’ve been wanting to make in regards to future Mailbag Mondays because, I have no idea what these are supposed to mean.  I’m going to have to start being more discriminating with my reader mail.  So if you make my head hurt trying to figure out what a “top on fart” is, I’m not going to run your letter.  You know, unless the internet quits sending me ridiculous google searches and I have to scrape the bottom of the old mailbag.  Until then, please try to bring “teh funny”!

Thank Baby Jesus for Mailbag Monday. We really needed that after Middle Earth Monday (as if Mondays weren’t bad enough already). Man, that Justin fart was epic. Of course, I was trying to sneak out a few during the Closing Ceremonies last night, but because I was sitting next to Justin, he started laughing, then I started laughing (at an unfunny part of the ceremonies) and everyone was staring at us, so I had to ‘fess the fart. What a faux pas!

Yeah, this is a real pitfall of stealth farting…if you start laughing before everyone smells it then they will know to cover their noses. Good try though!

And yes, like Eddie Murphy says, I’ll be saying “remember that fart you did…?” to Justin for a long long time. Gah. And that was BEFORE we ate Taco Bell too!

Mailbag Monday was bombed, and I didn’t even participate? I’m so proud. 🙂

I just want to say, I really really enjoyed the Brother Powerful sketch. Especially his cross.

I’ll have to bring him back in a future post sometime with a less rushed sketch! And could you tell that was broccoli?

I laughed so hard i farted.

I knew it was broccoli, but I’m highly trained for such things. I also noted the hairy legs. Is he Scottish, by chance?

Then I consider my work here done.

Vivid Booby for Best New Writer at isleyunruh.com? y/y?? PS Can you give me your brother’s phone number please? For, um, normal reasons?

“However, they are just little fellas, so I can’t image they can produce any emissions with real staying power.”

Clearly you haven’t spent much time around children. My nine month old has dropped a few that would curl your toes (or probably make you proud based on your article).

Good point. And I just realized that there was a third meaning of “brother powerful farts” that I overlooked…

Hah…you sure it wasn’t just dad trying to pass the blame? 😉

Duh! The most powerful farts of all!